1/3 of Gaza’s Dead and Wounded Are Children 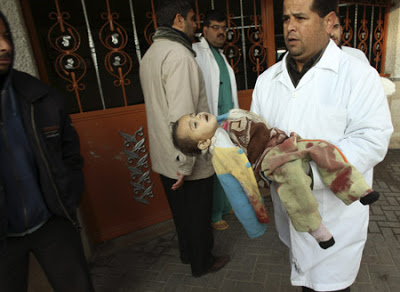 Photo by WAFA.
The IDF has no mercy for the children in Gaza nursery schools
By Gideon Levy / January 15, 2009

The fighting in Gaza is “war deluxe.” Compared with previous wars, it is child’s play – pilots bombing unimpeded as if on practice runs, tank and artillery soldiers shelling houses and civilians from their armored vehicles, combat engineering troops destroying entire streets in their ominous protected vehicles without facing serious opposition. A large, broad army is fighting against a helpless population and a weak, ragged organization that has fled the conflict zones and is barely putting up a fight. All this must be said openly, before we begin exulting in our heroism and victory.

This war is also child’s play because of its victims. About a third of those killed in Gaza have been children – 311, according to the Palestinian Health Ministry, 270 according to the B’Tselem human rights group – out of the 1,000 total killed as of Wednesday. Around 1,550 of the 4,500 wounded have also been children according to figures from the UN, which says the number of children killed has tripled since the ground operation began.

This is too large a proportion by any humanitarian or ethical standard.

It is enough to look at the pictures coming from Shifa Hospital to see how many burned, bleeding and dying children now lie there. History has seen innumerable brutal wars take countless lives.

But the horrifying proportion of this war, a third of the dead being children, has not been seen in recent memory.

God does not show mercy on the children at Gaza’s nursery schools, and neither does the Israel Defense Forces. That’s how it goes when war is waged in such a densely populated area with a population so blessed with children. About half of Gaza’s residents are under 15.

No pilot or soldier went to war to kill children. Not one among them intended to kill children, but it also seems neither did they intend not to kill them. They went to war after the IDF had already killed 952 Palestinian children and adolescents since May 2000.

The public’s shocking indifference to these figures is incomprehensible. A thousand propagandists and apologists cannot excuse this criminal killing. One can blame Hamas for the death of children, but no reasonable person in the world will buy these ludicrous, flawed propagandistic goods in light of the pictures and statistics coming from Gaza.

A significant majority of the children killed in Gaza did not die because they were used as human shields or because they worked for Hamas. They were killed because the IDF bombed, shelled or fired at them, their families or their apartment buildings. That is why the blood of Gaza’s children is on our hands, not on Hamas’ hands, and we will never be able to escape that responsibility.

The children of Gaza who survive this war will remember it. It is enough to watch Nazareth-born Juliano Mer Khamis’ wonderful movie “Arna’s Children” to understand what thrives amid the blood and ruin we are leaving behind. The film shows the children of Jenin – who have seen less horror than those of Gaza – growing up to be fighters and suicide bombers.

A child who has seen his house destroyed, his brother killed and his father humiliated will not forgive.

The last time I was allowed to visit Gaza, in November 2006, I went to the Indira Gandhi nursery school in Beit Lahia. The schoolchildren drew what they had seen the previous day: an IDF missile striking their school bus, killing their teacher, Najwa Halif, in front of their eyes. They were in shock. It is possible some of them have now been killed or wounded themselves.