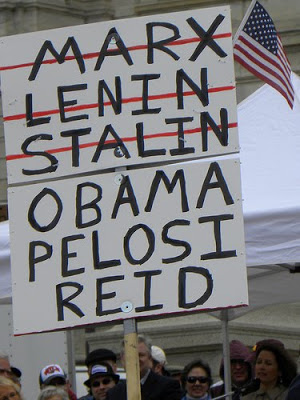 The picture above is a sign of our times. The right-wingers and teabaggers, which have taken over the Republican Party and driven out any remaining moderates, are doing their best to demonize anyone not on the fringe of the right-wing as socialists, left-wingers, or communists. They would like everyone to believe that the Democratic Party and its leaders such as President Obama, Nancy Pelosi and Harry Reid are so far to the left as to be un-American. That’s utterly ridiculous!

It’s sad that they have been able to marginalize the true left, which the right successfully equated with communism back in the 1930s and nearly eliminated. This left-wing began to make a comeback in the 1960s, but has yet to be fully rehabilitated in the eyes of the American people. While there are more of us each year, we are still a long way from gaining any real power in this country.

The truth is that President Obama, along with Pelosi and Reid, are nowhere near being true leftists. I know because I am an unashamed leftist (actually a real socialist). I wish the Democratic Party and its leaders were leftists — the country would be a lot better off. But there is only one real leftist in Congress (and none in the White House), and that is Senator Bernie Sanders — who is not a member of the Democratic Party.

The Democratic Party is composed mainly of centrists and conservatives (and nearly all of them are corporatists). By branding these centrists as “socialists” the Republicans are trying to move the country away from the middle and further to the right. They know this is largely a centrist country, so they want to move that center to the right and closer to their own fascist views.

But there is no leftist party in the United States. There is only the far-right (Republicans) and the slightly-right (Democrats). Even the conservatives in other countries (like Canada and Great Britain) are much closer to the U.S. Democrats than the fringe-right Republicans. There is no longer a major party that truly represents the left.

If you’ve read this blog for any time, then you’ll know I usually vote for and support Democrats. That’s not because they are leftists like myself (they aren’t), but because the Republicans have gone so far to the right that they are scary (and even a center-right alternative like the Democrats are preferable). That’s just the pitiful state that United States politics is in at this time. Left-wing philosopher and author Noam Chomsky puts it this way:

“I would drop the term left, ’cause, I mean, what is called the left in the media is what used to be called moderate Republicans. The so-called new Democrats are barely—they’re essentially what moderate Republicans were 30, 40 years ago. The Republicans are just brashly and openly the party of private power, private tyranny. They—I mean, they talk about we’re the common man and elites, but so does everyone. But if you look at the policies, that’s what it is. Take, say, Obama. I mean, the core of his funding in the 2000 [sic] election was actually financial institutions. And when groups of investors get together to control the state—what we call an election—they expect to be paid back. And they were.

[…] for roughly 35, 30 years, a little more, wages for the majority, real wages, have pretty much stagnated, working hours have increased. People have been getting by by having two adults working, or women in the workforce at lower wages, and by debt, and by asset inflation, like, say, the housing bubble. Well, that’s just not viable. And meanwhile these same people see that there’s plenty of wealth around, but it’s going into very few pockets. I mean, the top maybe 1 percent or even one-tenth of 1 percent of the population have been making out like bandits. And so we now have this incredible inequality, maybe back to the ’20s, or maybe even a record. And this is part of people’s consciousness. I’m working harder. Things are getting worse. I’m working more hours. Benefits which were never very good have declined. Meanwhile, other people are getting very rich. Something’s wrong. Give me an answer. They were right to ask for an answer. They’re not going to get it from the Democrats, the people who are called the left, because they are the ones who have been denying and implementing policies. They’re not going to say, yeah, that’s true; that’s what happens when we participated in the huge growth of the financial sector, which is of dubious significance for the economy, may be harmful, largely; we did that, and we assisted the policy of hollowing out production, which is a policy of setting working people in competition with each other throughout the world. So what we call our trade policies—a bad term for it. Certainly not free-trade policies. What are called free-trade policies are essentially a program setting working people against each other throughout the world, but protecting the privileged people.”

I would like to be an optimist and say that things will change in this country. That the left-wing will re-emerge in a big way and bring more social justice to the poor, workers, and even the middle class (which Republicans have also abandoned). But it may still be a while. The Republican policies (and to a smaller degree the Democratic policies) are ruining this country. They have already brought us a serious recession and jettisoned over 12 million jobs.

Now they want to continue broadening the class and wealth divide by letting the rich get an ever-increasing share of the country’s total wealth and income. When this gap is large enough and the bottom 95% of the population are virtually paupers, then we’ll see a second Great Depression. Maybe then people will return to the social justice views of the true left — but not before. It took the left to bring this country out of the first Great Depression. I just hope there will be enough remaining for the left to save us from the second one.

The American people have been deluded into thinking the right will save them. They are wrong. And the people will finally fight back when things get bad enough. The economic boot of the rich can only be kept on the necks of the people for so long, and then they will rise up and remove it. It’s just a question of how long it will be and how bad things will get.