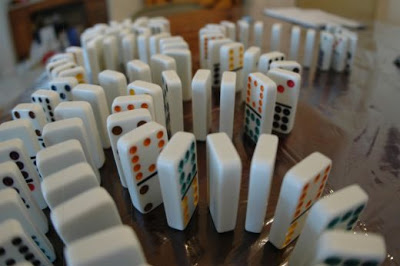 ‘It is getting awful damn hard to be optimistic about the US economy these days. If the problem can be fixed at all, it will probably really require an unprecedented degree of global cooperation.’
By Roger Baker / The Rag Blog / January 2, 2009

Here are two interesting, widely read, and intelligent viewpoints regarding where the US economy is headed in 2009. I would advise that they be read in full. Reading Kunstler is like drinking fine champagne. Bottom line: It is getting awful damn hard to be optimistic about the US economy these days. If the problem can be fixed at all, it will probably really require an unprecedented degree of global cooperation.

Kunstler’s crystal ball may thus be regarded as being admirably clear as judged by his track record. Plus his thinking is complemented with a wealth of detail. Following are a few snips from Kunstler’s 2009 forecast (well worth reading in full, IMO).

. . .Without reviewing all the vertiginous particulars of the year now ending, suffice it to say that the US economy fell on its ass and that the “global economy” did a face-plant as well. The American banking sector imploded spectacularly to the degree that investment banking actually went extinct — as if a meteor landed on the corner of Madison Avenue and 51st Street. The response by our government was to shovel “loans” onto the loading dock of every organization that pretended to be something like a bank, while “bailing out” an ever-longer line of corporate claimants with a pitiable song-and-dance. The oil markets went on a roller coaster ride. The housing bubble collapse grew to avalanche velocity (taking out whole colonies of realtors, mortgage brokers, and construction contractors in its path), the commercial real estate sector developed hemorrhagic fever, retail drove off a cliff on Christmas Eve, the stock market fell in the toilet, jobs and incomes went up in a vapor, and tens of millions of ordinary citizens addicted to revolving credit found themselves in a life-and-death struggle for the means of existence.

Apart from “cleaning up Dodge,” so to speak, and from issues of collective character-and conscience-in-office, I worry that the avalanche of troubles already ongoing will overwhelm Mr. Obama and his people .It’s also well worth worrying whether they will pursue policies similar in kind to the ones pursued by Bush, namely throwing money at everything and anything, and it sure looks like they are planning to do just that. I am especially concerned about an “infrastructure stimulus” project aimed at highway improvement at the expense of public transit. This would be the epitome of a campaign to sustain the unsustainable. We need to begin planning right away for a transition away from automobiles, not in order be good socialists but because Happy Motoring is at the core of our unsustainability trap. The car system is going to fail in manifold ways whether we like it or not, and it will fail due to circumstances already underway. For one thing, it will cease to be democratic as the remnants of the middle class find it impossible to get car loans, or pay for fuel, or insurance, and that will set in motion a very impressive politics-of-grievance setting apart those who are still able to enjoy motoring and those who have been foreclosed from it. Contrary to what you might make of the current situation in the oil markets, we are in for a heap of trouble with both the price and supply of petroleum (more on this below). And there is no chance in hell that any techno rescue remedy to keep all the cars running by other means will materialize. . .

[Regarding inflation] This is the “other shoe” that a lot of people are waiting to drop. Right now we are caught up in a compressive debt deflation as mortgages stop “performing” and loans of all kinds are welshed on. Since money is loaned into existence, and a great many loans are not being repaid, then a lot of money is going out of existence. That’s what I mean when I say that capital is leaving the system. At the same time, the Federal Reserve has made good on its promise to drop money from helicopters if necessary to prevent an implosion of the banking system (as all that older money goes out of existence), and so it’s now a question as to when the amount of new money will exceed the disappeared old money. (Of course when I say money, I mean “money,” because we are dealing here in a shadow realm of assumed value.) In any case, there is bound to be a lag period between the time that the Fed’s money is dropped from the choppers and the time it actually filters through the banks and other recipients to the so-called “real economy” of people who buy and sell real things. The credible estimates I hear run between six and 18 months.

I’ll only venture to guess that we could see the start of serious inflation sometime in 2009. To some extent, all currencies are now free-falling together, some at slightly faster rates than others, but the situation of the US dollar is so grotesquely dire, and our structural imbalances so monumental, that it is hard to imagine that our currency will not win the international race to the bottom. Gold resumed its movement upward against the dollar a week before Christmas, and that may be an early sign. The government — and anyone badly in debt — benefits much more from inflation than deflation, so every effort will be made to avert the latter. The trouble lies in the government’s dumb incapacity to control dangerous things that it sets in motion, so that an inflationary campaign to avoid compressive deflation can so easily lead to a fiasco of super or hyper inflation — the kind that kills governments and turns societies into murderous monsters. I’ll forecast the that the US dollar is worth 40 percent of its current value by next Christmas. . .

As a second example of judging where the US economy is headed, we have the following snips extracted from an article by Peter S. Goodman in the New York Times. The article notes with some alarm that the US government is printing, permitting, and spreading around gargantuan amounts of freshly generated cash and credit as an emergency measure, since the hundreds of billions of dollars in bank bailouts didn’t have much effect in stopping and reversing the current deflationary spiral.

The Treasury Dept, in cooperation with the Federal Reserve, and many other top US government officials, is generating trillions in new money and credit, including lowering the prime interest rate to zero (the interest rate that the biggest banks have to pay on their federal loans). The theory, in accord with classic Keynesian theory, is that sooner or later, when everyone including the banks are waist-deep in cash, they will be in a mood to start spending it more freely again. Flooding the economy with lots of cash will no doubt get folks spending again at some point.

The downside is that whenever the psychology finally does turn around, it is likely to turn around rather suddenly and unpredictably. Whenever this happens, average cash-strapped consumers who are already strapped by credit card debt are likely to focus their spending on those consumer necessities that are already in short supply. Things like heating oil, gasoline, and food. Such vital necessity prices are likely to get bid up pretty fast. Meanwhile those investors who have extra cash, and with a sense of history, are more likely to spend it on bars of gold, rather than as previously on second homes in Palm Beach or trips to Las Vegas. The New York Times piece lacks the vigor and predictive clarity of Kunstler’s predictions, but a lot of the message is the same.

. . .The value of outstanding American Treasury bills now reaches $10.6 trillion, a number sure to increase as dollars are spent building bridges, saving auto jobs and preventing the collapse of government-backed mortgage giants. Worry centers on the possibility that foreigners could come to doubt the American wherewithal to pay back such an extraordinary sum, prompting them to stop — or at least slow — their deposits of savings into the United States.

That could send the dollar plummeting, making imported goods more expensive for American consumers and businesses. It would force the Treasury to pay higher returns to find takers for its debt, increasing interest rates for home- and auto-buyers, for businesses and credit-card holders.

“We got into this mess to a considerable extent by overborrowing,” said Martin N. Baily, a chairman of the Council of Economic Advisers under President Clinton and now a fellow at the Brookings Institution. “Now, we’re saying, ‘Well, O.K., let’s just borrow a bunch more, and that will help us get out of this mess.’ It’s like a drunk who says, ‘Give me a bottle of Scotch, and then I’ll be O.K. and I won’t have to drink anymore.’ Eventually, we have to get off this binge of borrowing.”

Some argue that the moment for sobriety is long overdue, and postponing it further only increases the ultimate costs. “Our government doesn’t have enough spare cash to bail out a lemonade stand,” declared Peter Schiff president of Euro Pacific Capital, a Connecticut-based trading house. “Our standard of living must decline to reflect years of reckless consumption and the disintegration of our industrial base. Only by swallowing this tough medicine now will our sick economy ever recover.”

But most economists cast such thinking as recklessly extreme, akin to putting an obese person on a painful diet in the name of long-term health just as they are fighting off a potentially lethal infection. In the dominant view, now is no time for austerity — not with paychecks disappearing from the economy and gyrating markets wiping out retirement savings. Not with the financial system in virtual lockdown, and much of the world in a similar state of retrenchment, shrinking demand for American goods and services. . .

. . .The most frequently voiced worry about the bailouts is that the Fed, by sending so much money sloshing through the system, risks generating a bad case of rising prices later on. That puts the onus on the Fed to reverse course and crimp economic activity by lifting interest rates and selling assets back to banks once growth resumes.

But finding the appropriate point to act tends to be more art than science. The Fed might move too early and send the economy back into a tailspin. It might wait too long and let too much money generate inflation.

“It’s a tricky business,” says Allan H. Meltzer, an economist at Carnegie Mellon University, and a former economic adviser to President Reagan. “There’s no math model that tells us when to do it or how.”. . .

This entry was posted in Rag Bloggers and tagged 2009, Economic Recovery, Economy, Inflation. Bookmark the permalink.