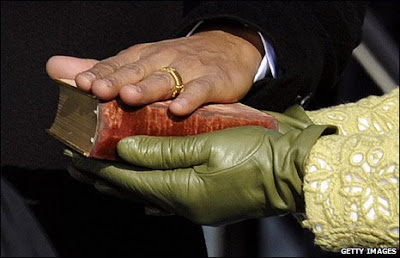 President Barack Obama swears in on the Lincoln Bible. Photo from Getty Images.
The Bible bill?

Rep. Broun’s simple congressional resolution aimed at honoring the Good Book has produced a push-back of biblical proportion in the blogosphere, with critics dismissing it as either unconstitutional or a waste of time.

Broun’s simple congressional resolution aimed at honoring the Good Book has produced a push-back of biblical proportion in the blogosphere, with critics dismissing it as either unconstitutional or a waste of time. Jews in Congress and atheist activists are dismissing the resolution, while none of the many Democrats in Congress who are Christian have bothered to sign on as co-sponsors.

According to GovTrak.us, the resolution is among the most-blogged-about pieces of legislation, with most posts less than complimentary in nature.

“That’s an endorsement of religion by the federal government, and we shouldn’t be doing that,” said Rep. Jerrold Nadler (D-N.Y.), even though he has introduced his own legislation dealing with religion.

“Republican lawmakers with apparently too much time on their hands and no solutions to offer the country are pushing a resolution that will not address the nation’s problems or advance prosperity or even untangle their previous governing mistakes,” blogged the Progressive Puppy.

Broun rejects the critiques leveled at this effort.

“This doesn’t have anything to do with Christianity,” he said in an interview with POLITICO. Rather, he says, it seeks to recognize that the Bible played an integral role in the building of the United States, including providing the basis for our freedom of religion that allows Muslims, Hindus and even atheists to vocalize their own beliefs.

And even as Nadler criticized Broun, he has done his own share of mixing religion and legislation.

Last year, he introduced a bill that would overturn a federal appeals court ruling — an “idiot” decision, he says — that a condominium board in Chicago had the right to ban Jews from installing mezuzahs, which consist of a piece of parchment inscribed with a specific religious text put inside a case and hung on a door frame.

Condo boards shouldn’t be able to interfere in an individual’s right to practice his or her religion, Nadler said.

But he himself declined to install a mezuzah on his congressional office door when asked by a rabbi, even though he does so at home.

“That’s my religious symbol, and the office does not belong to me; it belongs to the people of the congressional district, and no one should feel uncomfortable walking into the office if it’s not their religion,” Nadler said, describing his feelings on religion and Congress.

“Same thing with the Bible. … It’s not everybody’s religion. And the federal government should not be imposing religious viewpoints.”

Atheists, who might feel themselves a particular target with the declaration of a biblical year, aren’t even worried about Broun’s effort.

“Right now, we’re seeing atheism on such a rise,” said David Silverman, vice president and national spokesman of American Atheists, a group dedicated to fighting for the civil rights of atheists.

“We are seeing Christianity on such a dramatic decline that we’re not particularly worried about it. We’re thinking that this kind of old-style George W. Bush Republicanism is about to go away,” Silverman said, referring to the latest Pew Forum survey of American religious life, which showed nonreligious Americans as the fastest-growing group.

And it may be the best-selling book of all time, as Broun’s resolution points out, but the Bible isn’t such a popular legislative topic.

A search of Thomas, the online congressional database, for “Bible” yields just one other bill: a resolution to have the “Lincoln-Obama Bible” on permanent display in the Capitol Visitor Center.

The resolution specifically asks the president “to issue a proclamation calling upon citizens of all faiths to rediscover and apply the priceless, timeless message of the Holy Scripture which has profoundly influenced and shaped the United States and its great democratic form of government.”

As for the economy, health care, global warming and all the other issues on Congress’ plate?

“While we must focus on fiscal policies that provide relief to families during these tough economic times, an endeavor I have been working tirelessly towards in this Congress, we must also not forget to protect and celebrate our fundamental freedoms that the Bible has influenced,” Broun said.

Broun has gathered 15 co-sponsors, all Republicans, but says he’s looking for more and hopes Democrats will sign on, as well.

“This is not a partisan issue,” he said. “I want it to be bipartisan.”

Whether he’s successful or not — the same measure didn’t go anywhere last year — at least Broun and his fellow supporters can take heart in one fact: They already had a “year of the Bible.”

Thanks to Kathy Tomlinson / The Rag Blog

This entry was posted in RagBlog and tagged Atheism, Christianity, Congress, Religion. Bookmark the permalink.