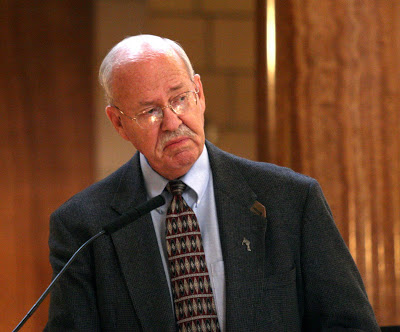 The new bill, introduced by Senator Cap Dierks (a male who would never have to deal with the new restrictions imposed by the law), would impose new requirements on any woman seeking an abortion. It would require the woman to be screened for any risks the procedure could cause, including “physical, psychological, emotional, demographic or situational” risks.

The legislators have intentionally made the law as vague as possible in an effort to scare doctors away from performing legal abortions. What the hell is the difference between a psychological and emotional risk? And what the hell is a demographic or situational risk? Does anyone know? And if a doctor doesn’t know that, how can they be sure of complying with this silly law?

The law doesn’t provide for any criminal penalties, but it would allow a patient to sue any doctor who doesn’t comply fully with the law (and a jury of closet fundamentalists could wreck a doctor’s career for performing a legal procedure). Kyle Carlson, a Planned Parenthood attorney, said, “It’s very difficult to know for certain if you’re complying with this bill. There’s an undetermined amount of documentation you have to go through to know all the different… risk factors.”

These legislators tried to make it sound like they were worried about women’s health. They aren’t. This is nothing more than a backdoor attempt to take away a woman’s rights over her own body. Women are already screened for any medical problems the procedure might cause, and frankly, denying an abortion for a spurious reason (such as a demographic or situational risk) could easily be just as risky for a women not prepared to deal with a baby (or another baby).

There are already far too many instances of child abuse and child murders by women under stress or with psychotic problems. Forcing women to have unwanted babies will just make the problem worse. This must be a woman’s own decision, as she is the only person who truly knows the situation she is in.

Hopefully, this new law will be quickly challenged in court. I believe it can be challenged on grounds of vagueness and discrimination. The law is so vague as to be almost impossible to obey. Also, it will substantially increase the cost of the legal procedure — making it even more difficult for poor women, if not impossible.

This is just a bad law, and the courts need to toss it out as quickly as possible.