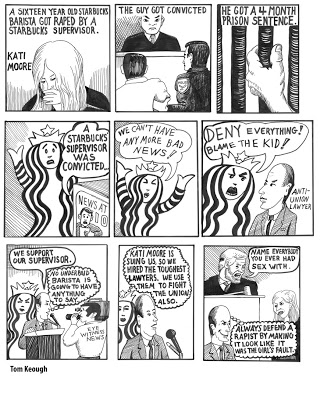 I do cartoons for the Starbucks workers who are trying to unionize and get better working conditions. This rape case shows the total lack of care for an employee and automatic defense of anything a manager does. I think more people need to hear about the struggles of average people and the way our corporate masters use all kinds of extremely expensive methods to get their way.

When I first heard that the majority at a NYC Starbucks announced that they wanted a union contract I was amazed. When I was growing up, almost everyone I knew had either worked at McDonalds at some time or had family working there. My father had tried organizing McDonalds workers in Connecticut when he worked there. The biggest problem seemed to be that no union wanted fast food workers. I’ll never forget seeing the mothers of two of my friends, almost in tears, talking about how unfair it was that the men at Pratt and Whitney, or Colts could have unions but not them. McDonalds work is hot, greasy, hard, fast exhausting work.

So I try to help the Starbucks Workers Union, which is an IWW union in the US. and Canada. There is a union organizing campaign well under way in Chile and efforts have started in Europe. In New Zealand all the fast food chain restaurants are owned by one man and the employees are all union.

The Starbuck’s workers face severa unique problems. The company has a nationwide policy of no full time employment for non-management workers. This way they avoid having to pay benefits. Their U.S. employees also have no set schedules. A lawyer for Starbucks once said that this is to prevent the part-time staff from getting another job. If you work there you won’t know the next wee’s schedule until two or three days before the week starts.

In the shops where the baristas have announced their desire to unionize, Starbucks has refused to recognize the union. BUT in those shops, improvements have suddenly occurred. The first shop to go union soon became the first Starbucks to give all employees a December holiday cash bonus. In other locations safety and other improvements were made. In the U.S. the union has taken the company to court and won every time so far. The company spends large amounts of money on their lawyers in these cases.