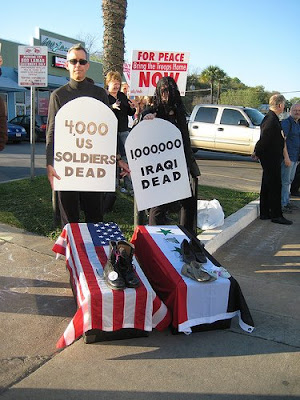 For over a month, CodePink Austin had the 4,000 U.S. dead in Iraq on its mind. A standing call was out for a vigil to mark the number and to remind the public of the human cost of this war – both the U.S. and Iraqi dead.

On a day in which Bush was greeting the Easter bunny on the White House lawn, Monday, April 24 at 5 p.m., CodePink was joined by many others in a somber vigil at a busy street corner in Austin.

Two coffins were flag draped – the one with the U.S. flag had combat boots on top of it, the other with an Iraqi flag bore the civilian shoes of a man, woman and child. Two tombstones were held behind the coffins with the toll of dead – 4,000 soldiers and 1,000,000 Iraqis. The larger estimate includes Iraqis dead from violence and disruption, including non-potable water and hospitals without electricity. Most of those in attendance wore black.

Members of Movement for a Democratic Society (MDS/Austin) and the musicians group, Instruments for Peace joined the stalwart CodePink contingent on Lamar and Sixth Street, near Austin landmarks Whole Foods and the Waterloo Ice House. As the crowd grew to 75, it spread to all four street corners. The familiar MDS signs read: “For Peace, Bring the Troops Home NOW.” Other signs read simply: “4,000 Too Many.”

The event drew attention from the media and from the drivers and passengers at the downtown intersection.It was a brief moment away from the Democratic primary scuffle that the media loves to peddle, away from the Easter bunny, away from the scandals of mayors and governors. It was a time to solemnly mark the death toll and to remember that it keeps steadily rising.

This entry was posted in Rag Bloggers and tagged Austin, Iraq, Peace Movement. Bookmark the permalink.