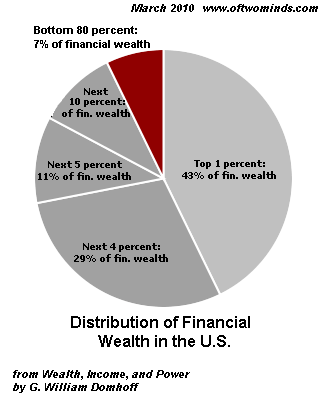 Just the other day, Rick Warren (a powerful right-wing fundamentalist preacher) made the statement, “I do not believe in income redistribution, I believe in wealth creation.” He went on to say the only way to get people out of poverty is to create jobs for them.

The idea he is spreading is that wealth redistribution is something that only goes on in a socialist economy, and it means that money is taken away from hard-working people and given to lazy people who don’t want to work.

This is the definition that rich people (and their lackeys, congressional Republicans) want the American public to accept, because if Americans accept that definition, then the rich will not have to share any of their wealth in the form of taxes or decent wages and benefits for their workers.

The problem with that definition is that it is simply a lie. It ignores the fact that wealth redistribution goes on in every society and country in the world every day. In fact, no modern economy can work without wealth being continually redistributed — and that is especially true of a capitalist economy (or as the right-wing now prefers to call it, a “free enterprise” economy).

The truth is that a capitalist economy (actually any kind of economy) requires wealth redistribution. Without the redistribution of wealth, a modern economy would cease to function. Understanding this, we can see that the wrong question is being posed by the right wing in this country.

There are basically two choices in the United States (since the third choice, communism, is not an option most Americans would even consider). These choices are to have either an unregulated (or pure) capitalist system, or to have a regulated capitalist system. The difference is simply one of fairness.

In an unregulated capitalist system, there are no rules and few (if any) taxes. There are no protections for either consumers or workers. In this system, the wealth will eventually wind up mostly in the hands of a few. This few will be incredibly rich, while the rest of the people in the country will be left to fight for survival.

Since about 1980, the Republican Party has been trying to move this country toward an unregulated capitalism. They have removed many regulations and lowered taxes for the rich. The result is shown in the chart above.

But this is not good enough for the Republicans (or their rich masters). They want to deregulate even more, and they want to cut taxes for the rich even more. Is this really the kind of economy you want to live in — where the rich have most of the wealth and everyone else must scramble for the scraps left over? If not, then a well-regulated capitalism is the only option.

The Republicans will tell you that a regulated capitalism is nothing more than socialism. Don’t let that scare you. In regulated capitalism, free enterprise is maintained. But businesses cannot treat consumers unfairly or rip them off, because there are legal protections (regulations). Workers are also protected by safety rules, minimum wage laws, anti-discrimination laws, the right to form unions, and other protections (regulations).

In a regulated capitalism, the rich (and the corporations) are also expected to pay their fair share of taxes. These taxes are used to build infrastructure, run government, defend the country, provide police and fire protection, help the needy and disadvantaged, fund education and training programs, and protect the environment (among other things).

In this system, all of the country’s citizens share in the nation’s wealth. There will still be rich and poor, but in general there is a much fairer distribution of the nation’s wealth — meaning everyone will be better off (and not just the rich).

So the next time someone tells you they are opposed to “wealth redistribution,” understand that they are either an idiot or a liar. Wealth redistribution happens every day. The real question is whether we want it to be fair, or to go only to the rich.