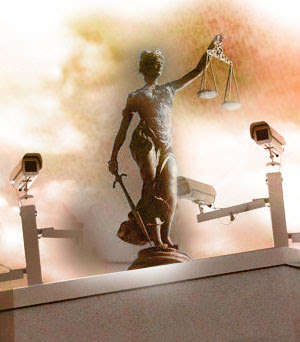 The White House lost an appeal to keep secret visitor logs containing the identities of evangelical Christian leaders who visited the White House and Vice President Dick Cheney’s home, according to an opinion issued Friday by a federal appeals court.

The U.S. Court of Appeals for the D.C. Circuit rejected the Bush administration’s claims that Secret Service visitor logs are the property of President George W. Bush and are not subject to Freedom of Information Act (FOIA) requests. The White House assumed control of the visitor logs when watchdog groups and the media sought access to the files.

The panel of three appeals court judges essentially upheld a December decision by a U.S. District Court judge who said the visitor logs were public documents subject to the FOIA. They sent the case back to District Court Judge Royce Lamberth for consideration

“At that point, the court may agree with the agency, allowing it to withhold the requested records, in which case the government would have no cause to appeal,” says the appeals court’s opinion.

The government watchdog group Citizens for Responsibility and Ethics in Washington (CREW) sued the Department of Homeland Security in 2006 for access to the records after the Secret Service — on orders from Cheney — refused to process CREW’s FOIA request. The Secret Service was formerly operated by the Treasury Department. It became part of the Homeland Security Department in March 2003.

The Bush administration had argued in its appeal that a Supreme Court ruling issued in 2004 “warning that courts should hesitate before requiring the President or Vice President to “bear the burden” of “asserting specific claims of privilege and making . . . particular objections.”

“In this case, we disagree,” states the 14-page opinion written by Clinton appointee David Tatel. “We find unpersuasive the government’s argument that this case implicates the same separation-of-powers concerns present in” a lawsuit filed against the vice president for access to documents related to the identities of corporate executives and lobbyists who advised Cheney on energy policy.

CREW is seeking “documents not from the President or Vice President, but rather from the Secret Service, a FOIA agency well accustomed to dealing with such requests,” the appeals court opinion states. “According to the Secret Service’s FOIA officer, “the individuals who performed the searches . . . conduct FOIA searches as part of their regular responsibilities.”

In its 2006 FOIA filing, CREW identified nine evangelical Christian leaders, such as James Dobson of Focus on the Family, Family Research Council president Tony Perkins, Gary Bauer and Moral Majority co-founder Jerry Falwell, who visited the White House and Cheney’s residence since 2001, who are alleged to have had a major impact on some aspects of the Bush administration’s domestic and foreign policy decisions.

“We are pleased that the D.C. Circuit is requiring the government to provide these Secret Service records that the White House has been trying to hide from the public,” said Anne Weismann, chief counsel for CREW. “The American people are entitled to know who has been influencing the White House.”

Last December, the White House sent out Christmas cards signed by President Bush and his wife Laura that contained a Biblical passage from the Old Testament:

“You alone are the LORD. You made the heavens, even the highest heavens, and all their starry host, the earth and all that is on it, the seas and all that is in them. You give life to everything, and the multitudes of heaven worship you.”

The inclusion of the Biblical passage caught the attention of longtime broadcaster Barbara Walters, who was a recipient of the presidential Christmas card.

Walters said she doesn’t recall receiving “religious” holiday cards from past presidents and she wondered how non-Christians would receive such an overtly religious greeting.

“Usually in the past when I have received a Christmas card, it’s been ‘Happy Holidays’ and so on,” said Walters. “Don’t you think it’s a little interesting that the president of all the people is sending out a religious Christmas card? Does this also go to agnostics, and atheists, and Muslims?”

The Biblical passage inside the Christmas card did not amount to a constitutional violation because it was paid for by the Republican National Committee, but Weinstein said it’s intolerable, nonetheless, because military officials believe they have the approval of the White House to allow fundamentalist Christian organizations and their leaders to proselytize in the military.

The appeals court said it lacked jurisdiction to resolve the Bush administration’s appeal because the U.S. District Court’s December 2007 ruling did not require the White House to produce the visitor logs, rather the court simply required that the Secret Service process CREW’s FOIA filing.

Moreover, the appeals court rejected the White House’s argument that requiring the government to process the request and invoke exemptions would place a constitutionally impermissible burden on the president or vice president. The court determined that CREW’s request is “narrowly drawn” and that requiring the administration to rely on the FOIA’s exemptions to protect claims of executive privilege “is a routine occurrence, not a uniquely intrusive burden.”

As a result of the court’s ruling, the Secret Service must process CREW’s FOIA request seeking copies of the visitor logs.

But the Bush administration is expected to assert other legal arguments, the White House indicated Friday, in an attempt to block access to the visitor logs and perhaps delay release of the materials until President Bush leaves office.

The appeals court judges added that, “it is entirely possible that the government will never have to turn over a single document.