A Chance to Be Heard Above the Propaganda 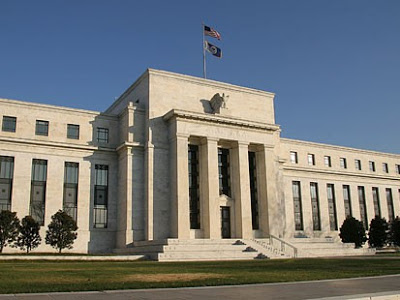 Federal Reserve building
A Master-Slave Society: Democrats in Denver Should Skip One of Their Parties and Read the American Monetary Act
By Richard C. Cook / August 28, 2008

How are things going at the Democratic Party National Convention in Denver this week?

Are they talking about the fact that the Western world is run by an international financial elite headquartered in London, the financial capitals of mainland Europe (such as Frankfurt, Hamburg, Amsterdam, Paris, and Milan), and, of course, New York City?

Are they mentioning at their cocktail parties that the financial elite exert control over the world’s population through the cartels that make up the world’s producing economies and through the civilian and military bureaucracies who work for the governments that kow-tow to them?

Of course they know that the most important cartels are those which control energy resources. And that of these, the commodity of central importance is oil. But is any of this helping them draw conclusions regarding the doubling of oil prices during the last year or about the largest oil company profits in history?

Also, they should be drawing the right conclusions from the fact that every private and pubic enterprise operates on the basis of a money economy, though it would be more accurate to call it a credit economy. This means that whoever controls the issuance of money and credit controls the world. And the world’s monetary systems function on the basis of money and credit being introduced into circulation through loans from the banking system, loans for which interest is charged. So what should that tell them?

In fact, they should be pointing out to each other and their TV viewers that the charging of interest for the use of money is a chain around the neck of everyone on earth. Further, that these cumulative interest charges are built into the price of every product that is manufactured or consumed. And that growth of debt means price increases too.

They should be honest in making it clear that the world is a master-slave society, that the slaves are those who borrow and pay interest, that the masters are those who collect the interest, and that this unjust system has existed in one form or another for thousands of years.

The candidates and delegates are talking about the aspirations of the American people and how everyone should have an opportunity to achieve their dreams. But if the United States were a free nation, they would also be talking about a financial system that destroys people’s dreams.

Unfortunately, the highest rung the candidates and delegates have been able to reach on the ladder of modern-day slavery is the need for more jobs—but they fail to note that jobs are not only the means by which people live, but also the instruments for them to pay the heavy burden of interest the masters of finance require.

What they won’t say is that the world economy is based on usury, something religions used to consider a crime (and which Islam still does). Usury is the charging of interest for the use of money. As the religions backed off from their prohibitions of interest, usury became just excess interest. But that’s not what the word really means.

So what have over two centuries of usury done to the United States?

The best answer ever given to that question was contained in a paper entitled “Revisiting U.S. Public and Private Debt” published in January 2005 by Dr. Bob Blain, Emeritus Professor of Sociology at Southern Illinois University. The paper updated an earlier study by Dr. Blain published for the United Nations Educational, Scientific, and Cultural Organization (UNESCO) in the International Social Science Journal, November, 1987, Paris, pages 577-591.

In his paper, Dr. Blain examined the growth of total public and private debt in the U.S. Total debt includes “the debts of governments (federal, state, and local), corporations, farmers, home mortgages, and consumer, commercial, and financial debts.”

In his analysis, Dr. Blain began with data from the Bureau of Economic Analyses of the United States Department of Commerce which covered the years 1916-1976. After that year the Bureau stopped publishing the data.

The figures showed that from 1916-1976, total U.S. debt grew from $82 billion to $3,800 billion ($3.8 trillion). But most of that growth was during the last 21 years, from 1955-1976, when it began to grow exponentially. Dr. Blain wrote, “The consistency of the pattern suggests that some imperative is at work, something that requires debt to increase.”

Dr. Blain found the answer by researching American history. He wrote: “Then I read G.R. Taylor’s 1950 book, Hamilton and the National Debt, which described the debate over Alexander Hamilton’s plan to fund the new economy with borrowed money.” He continued:

“The most revealing account was a speech by the first congressman from Georgia, James Jackson, on February 9, 1790, in which he predicted that adoption of Hamilton’s funding plan would lead to the explosive growth of debt. Jackson said, ‘Though our present debt be but a few millions, in the course of a single century it may be multiplied to an extent we dare not think of.’” (Annals of Congress, Vol. I, February 1790, pp. 1141-2)

From the very beginning, the U.S. had a monetary system based on borrowing and debt. First came the thousands of state chartered banks that began operating late in the Revolutionary War period and continued in one form or another until today. Then there were the two early central banks: the First Bank of the United States (1791-1811) and the Second Bank of the United States (1816-1836). Today’s national banking system began during the Civil War with the National Banking Acts of 1863-64. Then there is the system we are living under today, the Federal Reserve, chartered by Congress in 1913. Even during the times when the government has sold its debt directly to the public, as with war bonds, savings bonds, and Treasury notes and bills, that too has been money borrowed at interest.

Although there have been times in history when money entered into circulation other than through debt, such as with coinage and the Civil War greenbacks, those were exceptions and today are of little importance.

Dr. Blain estimated that from the time Alexander Hamilton placed the U.S. under a debt-based monetary system until today, the debt has compounded at 5.8 percent annually. The big problem with this system, he said, was “that no money was created to pay interest.” He continued:

“Loans created only the principal. Interest had to be paid out of principal. So payment of interest reduced the money supply and slowed economic activity. Recovery could come only when new loans were taken out at least equal to interest paid.”

Dr. Blain concluded, “As long as the money supply of a nation is created as debt costing interest, debt must grow by compound interest.” From a longer-range view, it’s a system that is constantly collapsing and that must constantly be bailed out.

Dr. Blain next sought to update his figures past the 1976 data from the Bureau of Economic Analyses. Turning to the Federal Reserve’s series on “Total Credit Market Debt Outstanding,” he found remarkably similar indicators.

It might be argued that these figures do not take into account inflation. This is because lending at interest is the cause of inflation. The dollars still have to be repaid with interest. The problem occurs when economic growth, measured by GDP, does not keep up.

But with continued compound growth of debt and a slow- or no-growth state of the economy as we head into a recession, we are starting to see what Dr. Blain called an “acceleration to meltdown.” He wrote:

“We are buying more and more in the same amount of time. Witness the efforts of people to get rid of their excess through yard sales, storage units, and big trash pickup days, and the massive size of what are euphemistically called landfills. While two billion people in the world lack basics such as clean water, food, and shelter, Americans throw away their microwave ovens, televisions, computers, refrigerators, furniture, and cars. Meanwhile, acceleration is applauded as increasing productivity. It’s like arguing that cancer is good because it grows.”

These are the things the Democrats in Denver should be talking about, instead of going to so many parties. They should be making note that the U.S., to quote economists close to the Federal Reserve, is “functionally bankrupt.”

In fact, the debt this nation owes to the banks, to foreign creditors, and to each other can never be paid off. Further, one big reason for all of our fruitless military endeavors overseas may simply be to escape unpleasant economic realities at home. But this is pointless. Nothing creates more debt than war, as the bankers have always known.

The only solution is to adopt a monetary system that is not based on debt. Dr. Blain makes a couple of specific recommendations: 1) “Stop using percentage rates to calculate charges for the use of money”; and 2) “Congress must supply the economy with a money base that is debt-free and interest-free.”

The second point is a call for a new monetary system, not one based solely on lending by the banks or on government borrowing. One organization that has developed a blueprint for such a system is the American Monetary Institute (AMI), headquartered in Chicago. The director of the AMI is Stephen Zarlenga, author of a massive, groundbreaking work: The Lost Science of Money (AMI, 2002). Zarlenga’s assistant is Jamie Walton, a monetary reformer from New Zealand.

AMI will be holding its fourth annual conference in Chicago on September 25-28. Expected as keynote speaker is Congressman Dennis Kucinich, whose wife Elizabeth once worked as an intern at AMI. Dr. Bob Blain will be a featured speaker.

On the AMI website at www.monetary.org is a remarkable document, the American Monetary Act. The product of several years of work by Zarlenga and his network, which now includes a number of local chapters around the country, the American Monetary Act would replace today’s debt-based monetary system with one where the government spends or loans money directly into circulation.

Under the Act, the Federal Reserve would be retained as a national financial clearinghouse but would no longer be a bank of issue. The system would be overseen by a Monetary Control Board within the U.S. Treasury Department. The Act also includes a provision for a citizens’ dividend, similar in some respects to the Alaska Permanent Fund, which would inject desperately needed purchasing power into the economy without additional government debt or taxation.

It’s the American Monetary Act the candidates and delegates in Denver should skip one of their parties to read, because it’s the only way any of their hopes for America can ever be realized. Says AMI’s Jamie Walton:

“This is a crucial time. Things are happening. We have got some key media people talking and writing about our kind of reforms. The inertia is starting to yield. Things are starting to roll. The worsening conditions in 2009 will give us a once-in-a-lifetime chance to be heard above the propaganda.”

Richard C. Cook is a former U.S. federal government analyst, whose career included service with the U.S. Civil Service Commission, the Food and Drug Administration, the Carter White House, NASA, and the U.S. Treasury Department. He is a contributor to the American Monetary Act. His articles on economics, politics, and space policy have appeared in numerous websites and print magazines. His book on monetary reform, entitled We Hold These Truths: The Hope of Monetary Reform, will soon be published by Tendril Press. He is the author of Challenger Revealed: An Insider’s Account of How the Reagan Administration Caused the Greatest Tragedy of the Space Age, called by one reviewer, “the most important spaceflight book of the last twenty years.” His website is www.richardccook.com. Comments or requests to be added to his mailing list may be sent to WhiteLightPress@gmail.com.

This entry was posted in RagBlog and tagged Debt, Economy, Federal Reserve. Bookmark the permalink.