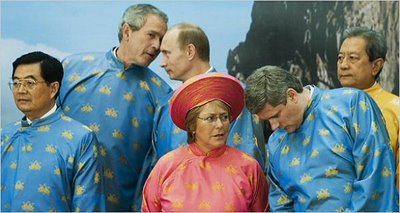 US President George Bush, forced to recant and apologize for his illegal invasion of Iraq in Vietnam on Sunday, here wears the “cloak of shame” historically worn in Vietnam by prisoners awaiting execution by the French.

Surrounded by angry Vietnamese in Hanoi on Sunday, US President George W. Bush was forced to recant his reasons for and initiation of the US war in Iraq. The protesting Vietnamese, many of whom had lost loved ones in the US war against Vietnam in the 1960s and 70s, said they were angry with Bush’s statement several days earlier that the “lesson of the Vietnam war is that we will win in Iraq if we don’t quit,” according to several people in the crowd.

Shouting slogans, including “American imperialism will die in Iraq” and “Would twenty years instead of ten have done it?”, the angry crowd quickly produced replicas of the “cloak of shame” historically worn by Vietnamese resistance fighters awaiting execution by the French during Vietnam’s war of liberation against French colonialism, and forced Bush and heads of state accompanying him to don them as a condition of release.

On the cloaks, an upright and an inverted “V” can be seen superimposed on the lion that symbolized the French empire, and the lion is supine.

“Like the French lion, the American eagle sometimes wanders too far from home in search of prey, and pays too great a cost for such adventure,” said an elderly man in the crowd.

Bush had briefly resisted wearing the garment, but when a spokesperson for the workers revealed that the protesters were all workers at a local Sony contract plant responsible for assembling the new Sony PlayStation III and threatened to withhold shipments of the popular toy until after Christmas, dropping US holiday-season retail sales markedly, Bush capitulated, and agreed to blackmail his companion heads of state into donning the robes as well.

At upper left, Bush propositions Russian leader Vladimir Putin, while new Canadian PM Stephen Harper attempts to expose himself to President Michelle Bachelet of Chile, whose only response, according to a TV cameraman’s microphone digital tape of the encounter, was this: “Stephen, I’m not frightened by that tiny ‘chile pequin,’ but I’m looking directly into your right ear, and seeing only a hollow tunnel and the trees to your immediate left. It’s the same with Bush — why is that?”

Bush and the others were released unharmed shortly thereafter, although new conservative Canadian PM Harper was taken away briefly “for a talk about how to conduct himself while in Asia,” according to a police spokeswoman.