A Cuban Revolutionary and a Cuban Exile Reunite 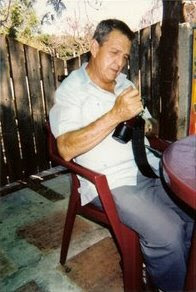 Toward the end of our week in Havana, Coqui took us on a tour of the mansions of Miramar where wealthy Cubans and North Americans once resided in the opulent days before Castro’s Revolution. Now the stark Russian Embassy tower dominated the main thoroughfare. We stopped for lunch at a small outdoor café.

Coqui brought up the case of “Pedrito,” his half-brother who left the island with his parents in the early 60s shortly after Fidel assumed power. Their father was a prominent doctor in Guantanamo and part of the exodus of middle-class professionals who left their homeland for the United States.

“I must tell you,” Coqui related, “that I always knew that I had a brother over there. I knew he lived at Chicago but he had moved to another city and I moved from Guantanamo to Havana, so we had lost our trails because in those moments it could be very difficult even sending a letter. About twenty years ago someone told me that my dad, Pedro, and stepmother were living at San Francisco.”

Many of Coqui’s touring customers were Californians. Some had offered to look for his missing brother but without success. Challenged by the dramatic nature of the task, I offered to look myself. I felt commissioned by the older brother whose life-long quest had too frequently ended with disappointment. Had he waited until this final encounter of our visit to share this precious information about a 40-year fraternal separation?

It was the spring of 2000. My 21-year-old daughter Rosy and I set out from the San Francisco Airport shortly after midnight. The ease with which we slipped into Fidel’s forbidden paradise amazed us. We switched planes in Mexico City and arrived in Havana in the afternoon. We came loaded with enthusiasm, preparation and gifts – an obscure Nissan car part, a “CARE package” for a Cuban boyfriend, a variety of over-the-counter pharmaceuticals.

Carlos Iglesias, a journalist friend, picked us up at the Havana airport and brought us to our rooftop apartment in the Vedado section of the capital city.

We packed our week with explorations of colonial architecture, strolls along the coastal Malecon, stopping for impromptu displays of music and singing. Already an accomplished drummer, Rosy took a private percussion class. We attended a folkloric dance performance at UNEAC, the National Union of Cuban Writers and Artists located in an old mansion just a block from our residence. After returning to the apartment, we could still hear the music wafting across the tropical air as we looked out across the cityscape, past the downtown hotels to the Caribbean.

We were introduced to Coqui Salazar when looking for a way to get to the beach on the eastern outskirts of the city. He lived just two floors below us with his wife and two children. He owned a car, not a common occurrence in Havana, spoke English quite well and chauffeured tourists around the city for a living. Nicknamed Coqui as an infant for his fuzzy coconut-looking head, his full name was Pedro Enrique Salazar. Now 65, Coqui had a full mane of wavy black hair. As a young man, he fought with Castro in the mountains outside his native Guantanamo.

On a second trip to Playa Santa Maria, the sandy shore just east of Havana, Coqui brought his 10-year-old daughter Salome along. Rosy frolicked in the clear turquoise surf, exclaiming she’d never seen water this color before. Later she and Salome delighted in burying me in the sand as Coqui grinned.

One night, Coqui drove us to his favorite “paladar,” one of the many government-approved 12-seat-limit private restaurants that families have established in their garages or extra rooms. We were escorted past a living room to a tented annex. Rosy and I were the only guests. They lavished us with a variety of savory red and white lobster, more than we could consume at one sitting.

With each new experience, Coqui and I developed a trust and affection for one another that no doubt led him to share the information about his missing brother.

The day after our farewell lunch, I went to Carlos’ office in the Havana Libre Hotel to use his computer. His offices were in the Havana Libre Hotel (the Havana Hilton in pre-revolutionary times.) This time I sent a message to Jon Frappier, a detective friend in California, asking if he would search for a Pedro Salazar, or Pedro Eusebio Salazar, or Peter E. Salazar, living in northern California and born in the late 1950s.

Rosy and I returned to our apartment and packed our bags. Carlos picked us up for a farewell dinner with his family in the Lawton section of Havana and then the trip to the airport.

Several days after our return to San Francisco, Jon came to my house. I cleared the paper clutter on the yellow Formica kitchen table so he could spread out lists generated by his online investigation. Among them was a Pedro E. Salazar, born in 1957, living on 21st Street in San Francisco with a phone number. We both agreed it was good bet.

Jon departed and shortly after, I made the phone call. An older woman answered in Spanish. The mention of “Coqui” brought instant recognition. It was Elvira, Pedro’s 82-year-old mother and Coqui’s stepmother. She told me that Pedro no longer lived in her apartment. He had married and moved across the Bay to Alameda.

Pedro later recalled, “My mom called me that afternoon and said this guy called, just came back from Cuba where he met Coqui and had his phone number. My knees were shaking as I told my wife. I was beside myself.”

If I had the slightest reluctance in making the phone call, it was a concern that the two brothers, for reasons of political differences, were not interested in hearing from one another. My hesitation was momentary, easily overcome by a passion for the pursuit and the commission I had embraced.

Pedro Eusebio Salazar called me later that afternoon. It turned out he had been looking for his older brother for years. Now in his early 40s, Pedro worked as a chef in the University Club on San Francisco’s Nob Hill and lived across the Bay in Alameda. He suggested we meet at his mother’s apartment on Saturday.

Pedro recollected, “I have this memory of my brother standing in the door of my grandmother’s house in Guantanamo, as I sat on the couch. Coqui was dressed in his guerrilla fatigues, silhouetted by the sun, wearing his strap of bullets across his chest. He had been a member of the student movement in Havana working to overthrow the Batista regime.”

It was a bright morning, the day before Easter. I left my home on Bernal Heights, boarded the Mission 14 bus at the bottom of the hill, just nine blocks from my destination. Elvira lived in an apartment house on 21st Street between Mission and Valencia Streets. I had walked by the place many times and attended receptions in the storefront art gallery on the ground floor.

Elvira greeted me at the door of her apartment and ushered me into the living room where a table was set for lunch. The walls of the room were filled with family photographs set in Cuba and the U.S. Pedro, a dark handsome man with a bright smile, emerged from the kitchen where he was preparing our meal. He presented me with a bottle of wine.

Elvira went into her bedroom and came out with a photo of Coqui in Guantanamo in January, 1959 smiling as he stood in front of a jeep with a bandolier across his chest. I showed them my recent photo of Coqui taken during our Miramar lunch.

I gave them Coqui’s phone number at his Vedado apartment and said goodbye. It was the day before Easter. The morning news reported that Attorney-General Janet Reno had just raided the Miami home where Elian Gonzalez lived and rescued him for ultimate delivery to his father in Cuba. I boarded the bus home feeling I had been on a Cuban rescue mission myself.

Pedro called his older brother in Havana that afternoon, so filled with emotion, he couldn’t say very much. Elvira easily fell into reminiscing about her stepson’s youthful exploits. “Coqui, remember when you used to chase after that negrita in Guantanamo?”

Seven months later Pedro was finally able to take time off from work and fly to Cuba to see Coqui. Jon and I met Pedro at the University Club for a “Buen Viaje” toast.

He appeared dizzy with delight at what was about to happen the next day. To calm himself, he asked questions to suggest this was just another plane ride to a tropical resort. “Tell me, is there a place to go jogging there in Havana? I’ll probably need to get out and stretch after the long flight.”

Elvira moved in with Pedro’s wife and daughter for the week so they could all be close to the phone and receive news of the trip. I waited a few days before I called. “He says he’s come home again,” his wife told me. The brothers developed a daily ritual of standing on the balcony of the apartment toasting their reunion with their morning cups of coffee.

“I thought Coqui had stayed in the military,” Pedro discussed his trip to Cuba. “I thought I’d like to meet him once before I die. I remember circling Havana and seeing the lights of the city. Then there was the long wait at customs and big crowds in the airport lobby. I walked out front and then Coqui approached me with his two children. They began calling me ‘Tio’ right away. We hugged.

Coqui wrote to me after the reunion. “Thanks God, I meet you and Rosy, and you know the rest of this story. Meeting him at the airport was really one of the happiest moments I ever had. I kept on saying to myself: I just can’t believe it. You can imagine that the last time I saw Pedro, he was four years old, and at that moment I had in front of me a handsome tall man smiling at me and two of my kids kept on asking: Papa. That’s our uncle? We all gave him a big and close hug and believe me, there was more than one tear that moment. Bye for now and a big hug to you, Coqui.”

This entry was posted in RagBlog and tagged American Society, Cuba, Cuban Exiles. Bookmark the permalink.