A Deal of Stunning Simplicity 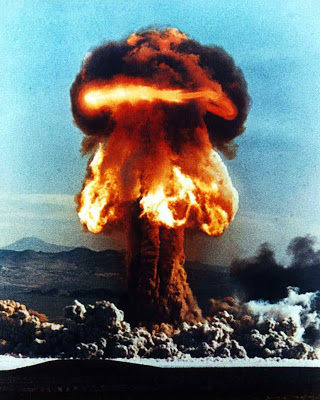 A Powerful Peace
by Jonathan Schell

If the nuclear powers wish to be safe from nuclear weapons, they must surrender their own.

With each year that passes, nuclear weapons provide their possessors with less safety while provoking more danger. Possession of nuclear arms provokes proliferation. Both nourish the global nuclear infrastructure, which in turn enlarges the possibility of acquisition by terrorist groups.

The step that is needed to break this cycle can be as little doubted as the source of the problem. The double standard of nuclear haves and have-nots must be replaced by a single standard, which can only be the goal of a world free of all nuclear weapons.

What is it that prevents sensible steps toward nuclear abolition from being taken? The answer cannot be in doubt, either. It is the resolve of the world’s nuclear powers to hold on to their nuclear arsenals. Countries that already have nuclear arms cite proliferation as their reason for keeping them, and those lacking nuclear arms seek them in large measure because they feel menaced by those with them.

A double-standard regime is a study in futility — a divided house that cannot stand. Its advocates preach what they have no intention of practicing. It is up to the nuclear powers to take the first step.

Their nuclear arsenals would be the largest pile of bargaining chips ever brought to any negotiating table. More powerful as instruments of peace than they ever can be for war, they would likely be more than adequate for winning agreements from the non-nuclear powers that would choke off proliferation forever.

The art of the negotiation would be to pay for strict, inspectable, enforceable nonproliferation and nuclear-materials-control agreements in the coin of existing nuclear bombs. What would be the price to the nuclear powers, for example, of a surrender by the nuclear-weapons-free states of their rights to the troublesome nuclear fuel cycle, which stands at the heart of the proliferation dilemma? Perhaps reductions by Russia and the United States from two thousand to a few hundred weapons each plus ratification of the Comprehensive Test Ban Treaty?

A world from which nuclear weapons had been banned would, of course, not be without its dangers, including nuclear ones. But we must ask how they would compare with those now approaching.

During the Cold War, the principal objection in the United States to a nuclear-weapon-free world was that you could not get there. That objection melted away with the Soviet Union, and today the principal objection is that even if you could get there, you would not want to be there. The arguments usually begin with the observation that nuclear weapons can never be disinvented, and that a world free of nuclear weapons is therefore at worst a mirage, at best a highly dangerous place to be. It is supposedly a mirage because, even if the hardware is removed, the know-how remains. It is said to be highly dangerous because the miscreant re-armer, now in possession of a nuclear monopoly, would be able to dictate terms to a helpless, terrorized world or, alternately, precipitate a helter-skelter, many-sided nuclear arms race.

This conclusion seems reasonable until you notice that history has taught an opposite lesson. Repeatedly, even the greatest nuclear powers have actually lost wars against tiny, backward nonnuclear adversaries without being able to extract the slightest utility from their colossal arsenals. Think of the Soviet Union in Afghanistan, or the U.S. in Vietnam, or Britian in Suez.

If, in the 60 years of the nuclear age, no great power has won a war by making nuclear threats against even tiny, weak adversaries, then how could a nuclear monopoly by a small country enable it to coerce and bully the whole world? The danger cannot be wholly discounted, but it is surely greatly exaggerated.

If the nuclear powers wish to be safe from nuclear weapons, they must surrender their own. They should collectively offer the world’s non-nuclear powers a deal of stunning simplicity, inarguable fairness, and patent common sense: we will get out of the nuclear weapon business if you stay out of it. Then we will all work together to assure that everyone abides by the commitment.

The united will of the human species to save itself from destruction would be a force to be reckoned with.

Jonathan Schell wrote this article as part of A Just Foreign Policy, the Summer 2008 issue of YES! Magazine. Jonathan is the Harold Willens Peace Fellow at the Nation Institute and a senior visiting lecturer at Yale. He has written many books. This article is adapted from his latest, The Seventh Decade: The New Shape of Nuclear Danger.

This entry was posted in RagBlog and tagged Nuclear Weapons, Peace, Warfare. Bookmark the permalink.