A Deer in the Headlights – Our Saturday Snapshot

From our own Paul Crassnerd, remarking about the appearance of George W. in his 11 January speech announcing the troop surge, et al:

… in response to his question about whether Bush seemed weirder than usual and maybe on bad drugs in his recent speech about the escalation surge:

I watched the performance, and I had the strong impression of a man reading a text from a Teleprompter and, who, having never seen it before being pushed to the podium, was attempting to understand it while reading it for the first time, and was quietly horrified, to the extent he understood anything at all about its implications. It was like a child being handed a Mapquest printout and told to open it and read it for Daddy, once the family is on the road. He starts reading it as the car backs out of the driveway and does so, knowing Daddy has his meal ticket. But as he’s reading, he’s thinking, ” ‘Then right turn off of road into Hell, arrive in Hell…..two-tenths of a mile.’ Is that a GOOD place, Daddy? We’re going straight to Hell?”

I dunno about the drugs, but his facial language is that of a man who is beginning to realize he has been very badly used, yet knows it all began when he imagined himself using those who use him now, so he is in a state of profound confusion and self-doubt. 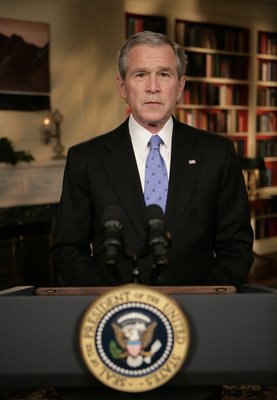