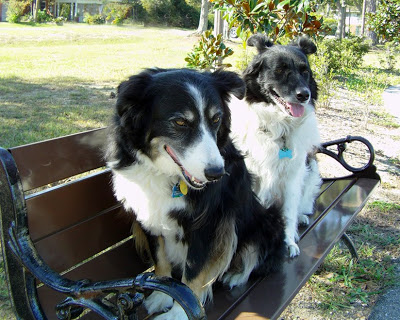 Walking my dogs under a crisp, cool, bright blue sky a few days ago in a nearby wooded park, I had an unusual, Felliniesque daydream. It all started when the peace and tranquility of the walk was broken by someone talking loudly on his cell phone, for all to hear, which is all too common today. A young fellow was totally absorbed in a verbal replay of his loss, recent physical pain and a love affair gone badly. He urgently shouted the details into his cellphone.

We picked up our pace to get away from the intrusion, but it seemed that he had decided to take the same trail behind us. He was detailing how he had cracked his ribs in some sort of a fall and how that had not hurt nearly as much as breaking up with the woman he still loved. He finally branched off on another trail leading away from us, the cell phone drama slowly fading out.

A relaxed free-form daydream began as we walked the familiar path. It turned into a Woody Guthrie moment for me. In a surprising flash, I had the title for a new country song: “That fall broke my ribs, but she broke my heart!” I hummed part of a stock three chord country western melody and tried out a couple of lines. It slowly became the sound track for the open-ended Fellini movie getting underway in my head.

It’s getting tough out in this old world/
my back’s against the wall/
The bank just took my house away/
now them credit cards ain’t no good at all/
When I fell off that stock room ladder/
and landed hard on the concrete floor,/
They laid me off that afternoon…/
and I don’t work at Walmart any more/
Then my wife took off and left me/
everything is falling apart/
That fall broke my ribs…/
but she broke my heart.

Hell, I’ve heard worse, and Woody might even have liked it. I bet the guy on the cell phone probably would have liked it too. I pictured this young man, working class, maybe in his late-twenties, probably a high school graduate, with maybe even a year or so of community college, as a metaphor for greedy banks, self-serving spineless politicians and millions of average folks just like him.

The daydream was also being fed with scenes from “The Card Game” a Frontline-New York Times co-production on PBS I had watched the night before. It laid bare the whole sorry, wild west story of the evolution of the American credit card and the half-hearted attempt to finally rein it in after almost a half century of unregulated abuse.

Frontline showed how banks have gotten away with predatory credit card practices and how a proposed Credit Card Control Act of 2009 was written with gaping loop holes that banks can use to continue exploitation of credit card holders… and still generously fund political campaigns.

I bet if I had actually talked to the fellow in the park and learned more about him other than what I was forced to overhear, he would have been a perfect example of what credit card issuers call the “unbanked market.” People living from paycheck to paycheck who use credit cards as though they were money… money that people refuse to realize they don’t have.

The whole credit card industry is designed to trap and exploit those people who don’t read the fine print in their contracts and who run up huge balances, making only minimum payments from one card to another. They rack up ever-changing penalty fees with huge loan interest rates in a scheme better than Machiavelli could have ever imagined. According to the Federal Reserve Bank, 40% of American families spent more than they earned in 2008.

Certainly no bank has forced anyone to use a credit card. But a “free” credit card seems so innocent, so easy, and “we can always just pay off the balance” is a reassuring rationalization. Credit cards quickly became as American as imitation apple pie with two-thirds of the population owning one or more in 2008. Too many folks were living high on the hog with bank credit card loans that weren’t legally considered “bank loans,” thereby allowing them to remain unregulated with nary a peep from Capitol Hill. Most all existing governmental financial regulation put in place after the Great Depression of the 1930’s had already been peeled away by the 1990’s.

Even though there were no Flappers or speakeasies, the giddiness of our recent boom times was just like the 1920’s, and just as imprudent. Americans with only modest incomes had learned to spend like they were making six figure salaries. Wallets are even designed to hold a dozen or so credit cards that slip in and out of an accordion fold of pockets for the mag-striped mañana money.

At the same time, home values were increasing at a record rate with no end in sight… but who was looking? Things seemed so good that second mortgage home loans were used to pay off huge credit card balances. Then in a blink, before the Republicans could get out of office in time, the inflated silver-dollar-studded Potemkin village blew over like a long line of doomed dominoes.

In no time folks were shouting their own Woody Guthrie lyrics over cell phones across the country. Homes now were valued at half of what they were mortgaged for. Americans again were jobless, out on the streets and forced to face harsh realities. Eighty-eight million accounts and credit lines, representing $751 billion in credit, have been closed since September of 2008.

My daydream in the park shifted to a classic Fellini scene with two huge cauldrons of smelly political broth bubbling and stewing up on Capitol Hill. They were both made from the same old soup stock. Senators in stained, flowing robes warned that the health care insurance gumbo may ultimately be indigestible. On an adjoining burner the low fat, credit card control consommé seemed way too thin but the Senators weren’t in the least concerned. A parade of morbidly obese, angry people brandishing illegible placards passed by the cauldrons and Senators, demanding that they be left alone to just govern themselves. “No big cauldrons. No big cauldrons,” they chanted.

The daydream is then jarred by a ticker tape crawl across my field of vision with endless data in large scrolling letters, “In September 2009 Americans currently owed $917 billion on revolving credit lines and $69 billion of it was past due, according to Federal Reserve statistics.” In the daydream I then realized that was just a couple of months ago, and I was jarred back to reality briefly. Soon the dream slowly returned as a classic Fellini black and white wide shot of a totally empty beach with waves slowly rolling in and I expected to see “Fine” or “The End” in Italian dissolve in over the meaningless empty beach.

Instead, the Border Collies were tugging insistently on the leash, literally yanking me out of my free-running reverie. The guy that had been shouting into his cell phone was now walking toward us, looking down at the edges of the path. He nodded to me and asked, “You haven’t seen a ring of keys have you?” I said I really hadn’t been paying much attention but that I would keep an eye out for them. For a moment I wondered it there was yet maybe another song in that somewhere? How about, “I was looking for my keys while they towed away my truck.” Woody, America could use you about now.