A Fish Stinks From Its Head 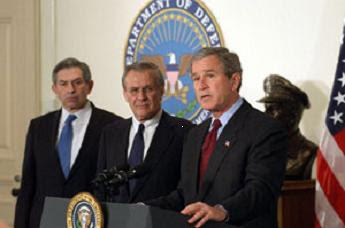 The three chief architects and salesmen of the war
Investigate This
by Scott Ritter / June 9, 2008

“I think the questions were asked. I think we pushed. I think we prodded. I think we challenged the president. I think not only those of us in the White House press corps did that, but others in the rest of the landscape of the media did that. … The right questions were asked. I think there’s a lot of critics-and I guess we can count Scott McClellan as one-who think that, if we did not debate the president, debate the policy in our role as journalists, if we did not stand up and say, ‘This is bogus,’ and ‘You’re a liar,’ and ‘Why are you doing this?’ that we didn’t do our job. And I respectfully disagree. It’s not our role.”

That was NBC correspondent David Gregory, appearing on MSNBC’s “Hardball With Chris Matthews.” He was responding to former White House press secretary Scott McClellan’s new book, “What Happened: Inside the Bush White House and Washington’s Culture of Deception.” McClellan has challenged the role of the U.S. media in investigating and reporting U.S. policy in times of conflict, especially when it comes to covering the government itself.

As a critic of U.S. foreign policy in the Middle East, especially when unsubstantiated allegations of weapons of mass destruction are used to sell a war, I am no stranger to the concept of questioning authority, especially in times of war. I am from the Teddy Roosevelt school of American citizenship, adhering to the principle that “to announce that there must be no criticism of the president, or that we are to stand by the president right or wrong, is not only unpatriotic and servile, but it is morally treasonable to the American public.”

Some may point out that Roosevelt made that statement in criticism of Woodrow Wilson’s foot dragging when it came to getting America into World War I, and that it is odd for one opposed to American involvement in Iraq to quote a former president who so enthusiastically embraced military intervention. But principle can cut both ways on any given issue. The principle inherent in the concept of the moral responsibility of the American people to question their leadership at all times, but especially when matters of war are at stake, is as valid for the pro as it is the con.

The validity of this principle is not judged on the level of militancy of the presidential action in question, but rather its viability as judged by the values and ideals of the American people. While the diversity of the United States dictates that there will be a divergence of consensus when it comes to individual values and ideals, the collective ought to agree that the foundation upon which all American values and ideals should be judged is the U.S. Constitution, setting forth as it does a framework of law which unites us all. To hold the Constitution up as a basis upon which to criticize the actions of any given president is perhaps the most patriotic act an American can engage in. As Theodore Roosevelt himself noted, “No man is above the law and no man is below it; nor do we ask any man’s permission when we ask him to obey it.”

Now David Gregory, and others who populate that curious slice of Americana known as “the media,” may hold that they, as journalists, operate on a different level than the average American citizen. As Mr. Gregory notes, it is not their “role” to question or debate policy set forth by the president. This is curious, coming from a leading member of a news team that prides itself on the “investigative” quality of its reporting. If we take Gregory at face value, it seems his only job (or “role”) is to simply parrot the policy formulations put forward by administration officials, that the integrity of journalism precludes the reporter from taking sides, and that any aggressive questioning concerning the veracity, or morality, or legality of any given policy would, in its own right, constitute opposition to said policy, and as such would be “taking sides.”

This, of course, is journalism in its most puritanical form, the ideal that the reporter simply reports, and keeps his or her personal opinion segregated from the “facts” as they are being presented. While it would be a farcical stretch for David Gregory, or any other mainstream reporter or correspondent, to realistically claim ownership of such a noble mantle, it appears that is exactly what Gregory did when he set forth the parameters of what his “role” was, and is, in reporting on stories such as the issue of Iraqi weapons of mass destruction and the Bush administration’s case for war. For this to be valid, however, the issue of journalistic integrity would need to apply not only to the individual reporter or correspondent, but also to the entire system to which the given reporter or correspondent belonged. In the case of Gregory, therefore, we must not only bring into the mix his own individual performance, but also that of NBC News and its parent organization, General Electric.

As a weapons inspector, I was very much driven by what the facts said, not what the rhetoric implied. I maintain this standard to this day in assessing and evaluating American policy in the Middle East. It was the core approach which governed my own personal questioning of the Bush administration’s case for confronting Iraq in the lead-up to the war in 2002 and 2003. I am saddened at the vindication of my position in the aftermath of the invasion and occupation of Iraq, not because of what I did, but rather what the transcripts of every media interview I conducted at the time demonstrates: The media were not interested in reporting the facts, but rather furthering a fiction. Time after time, I backed my opposition to the Bush administration’s “case” for war on Iraq with hard facts, citing evidence that could be readily checked by these erstwhile journalists had they been so inclined. Instead, my integrity and character were impugned by these simple recorders of “fact”, further enabling the fiction pushed by the administration into the mainstream, unchallenged and unquestioned, to be digested by the American public as truth.

Scott McClellan is correct to point out the complicity of the media in facilitating the rush to war. David Gregory is disingenuous in his denial that this was indeed the case. Jeff Cohen, a former producer at MSNBC, has written about the pressures placed on him and Phil Donahue leading to the cancellation of the latter’s top-rated television show just before the invasion of Iraq in March 2003. Katie Couric, the former co-host of NBC’s “Today Show” (and current news anchor for CBS News), has tacitly acknowledged “pressure” from above when it came to framing interviews in a manner that was detrimental to the Bush administration’s case for war. Jessica Yellin, who before the war in Iraq worked for MSNBC, put it best: “I think the press corps dropped the ball at the beginning,” she told CNN’s Anderson Cooper. “When the lead-up to the war began, the press corps was under enormous pressure from corporate executives, frankly, to make sure that this was a war that was presented in a way that was consistent with the patriotic fever in the nation and the president’s high approval ratings.”

Now, one would think that a journalist with the self-proclaimed integrity of Gregory would jump at the opportunity to take the bull by the horns, so to speak, and focus on this story line, if for no other reason than to prove it wrong and thereby clear his name (guilty by association, at the very least) and the name of the organization he represents. The matter is simple, on the surface: NBC network executives either did, or didn’t, pressure their producers and reporters when it came to covering and framing stories. Surely an investigative reporter of Gregory’s talent can get to the bottom of this one?

While Gregory certainly does not need help from someone of such humble journalistic credentials as myself, perhaps my experience as a former weapons inspector in tracking down the lies and inconsistencies of the Iraqi government could be of some assistance. The first thing I would do is to frame the scope of the problem. The issue of Iraq as a target worthy of war really didn’t hit the mainstream until the summer of 2002, so I would start there. I would be interested in defining the potential sources of “pressure” that could be placed on NBC as an organization when it came to reporting on Iraq.

Read all of it here. / TruthDig

This entry was posted in RagBlog and tagged Conspiracy, Corporate Media, Iraq. Bookmark the permalink.