A Great Idea: Give the Baghdad Embassy to Iraqis 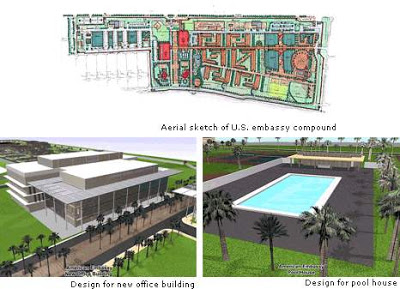 A bold step for US good will in Iraq: Convert the huge US Embassy into a university.
By Adil E. Shamoo / November 4, 2008

Baltimore – Here’s a bold proposal for the next US president: Issue an order to convert the controversial US Embassy in Baghdad into a university for the Iraqi people. This powerful message from our new leader would convey to the Iraqi people in particular a new direction for US policy.

Reports suggest that US combat troops will be on their way out by 2011. But the larger question of what gets left behind remains unanswered. The negotiations between Iraq and the United States on the long-term presence of US combat troops haven’t touched on the issue of the gigantic Green Zone and the US Embassy inside it. What we leave behind will have a lasting effect on Iraq, the Iraqi people, and the rest of the Muslim world.

Currently, the sprawling embassy reminds Iraqis of their occupation by an alien nation. It reminds them of the power and wealth of the United States while they live in squalid conditions, in part, as a result of this occupation.

Even after US troops leave Iraq, the embassy, in its current form, could remain a source of indignity to the Iraqi people. It could easily become the focus for all those who hate America for any reason and remain a target of violence.

Transforming it into a university, however, would be a striking symbol of American good will toward Iraq.

Why would the embassy make a fine university? It’s outsized dimensions make it ideal for a university campus in a downtown urban area.

It’s located in the heart of Baghdad on the banks of the Tigris River among Saddam Hussein’s former palaces. The embassy complex sits on 104 acres with 27 buildings and facilities, costing more than $700 million. It can house about 5,000 staff. The Romanesque structure and fortress-like compound is the largest US embassy in the world. And it is actually more like a small town than a diplomatic outpost. It’s self-contained with water, electricity, power, a food court, a swimming pool, a gym, and other forms of recreation – amenities well suited to school the next generation of Iraqis.

The university could draw hundreds of faculty volunteers from the United States and Europe, including many of the thousands of expatriate Iraqi professors now residing in those countries, as well as Iraqi professors. (The US volunteers would teach for short stints and wouldn’t be paid except for travel, lodging, and meals. The Iraqi professors would earn a regular salary.)

This transformation would signal a dramatic change. More important, this new university would annually train thousands of Iraqis in all disciplines essential to rebuilding the Iraqi infrastructure.

The university could be modeled after the outstanding American universities in Beirut and in Cairo, as well as the one under construction in Iraq’s Kurdish region. It could be called the American University in Iraq.

These universities are primarily grant-funded and the recipients of donations from individuals. They’re accredited in similar fashion to American universities. This accreditation would give the graduates access to further education anywhere in the world. This advantage would make the university very attractive to Iraqi students. The payment for the building cost could be negotiated between the US and Iraq, and the Iraqi government could shoulder some of the operating costs.

The US could then build a far smaller embassy that would be more appropriate for a country Iraq’s size. And the Iraqi government, as in any other country, would take responsibility for protecting it.

Recently, Secretary of Defense Robert Gates, Admiral Michael Mullin (chairman of the Joint Chiefs of Staff), and General David Petraeus have stated that economic reconstruction for Iraq and Afghanistan is crucial. Transforming a symbol of military occupation into a symbol of good will is part of that reconstruction. It’s the right thing to do – and it’s consistent with American values.

Converting the US Embassy in Baghdad into a university would mark a gigantic step toward reconciliation with Iraq. It would convey not only our long-range peaceful intentions towards Iraq, but also that our power resides in the talents of the American people and their values. Having our legacy in Iraq be symbolized by a university that helps Iraqis prepare for the future would be far better than letting it be defined by an American-occupied fortress.

Adil E. Shamoo, a senior analyst for Foreign Policy In Focus, is an Iraqi-American and a professor at the University of Maryland School of Medicine. He writes on ethics and public policy.

This entry was posted in RagBlog and tagged Iraq, Iraq Withdrawal. Bookmark the permalink.