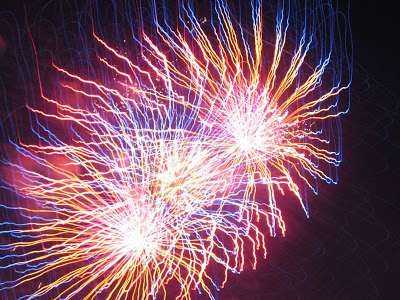 Your Fourth of July is blood for oil.

My Fourth of July is the pure sunbeam of peace.

Yours is the imperial presidency and “so what?” to public opinion.

Yours is profiling and discrimination.

Mine is “all men are endowed by their Creator with certain inalienable rights.”

Yours is “My country right or wrong.”

Mine is avoiding “Offences against the Law of Nations”

Yours is the veto of child health care and rejection of Kyoto,

Mine is an America that cares about the wellbeing of our children.

Yours is a monarchical presidency above the law.

Mine is, with Tom Paine, “in free countries the law ought to be king; and there ought to be no other.”

Yours is aggressive invasions of countries that did not attack us first.

Mine is “and hold them, as we hold the rest of mankind, Enemies in War, in Peace Friends.”

Yours is water-boarding and electrocution.

Mine is the prohibition on cruel and unusual punishment.

Yours is the stench of a million moldering corpses, military rule over 27 million, and the creation of oceans of misery.

Mine is “life, liberty and the pursuit of happiness.”

Mine is a stewardship of America the beautiful for succeeding generations.

Yours is the privatization of war and the deployment of whole divisions of “contractors . . .“

Mine is an America where privates do not risk their lives for a tenth of what a mercenary is paid by the Pentagon.

Yours is the erection of protest zones as zoos for citizens.

Mine is, “or the right of the people peaceably to assemble, and to petition the Government for a redress of grievances.”

Yours is the swagger of the flight jacket and the bombs raining down.

Mine is the schooling of the next global generation.

Mine is America, the pure sunbeam of peace.

—–
With apologies to Kahlil Gibran.

This entry was posted in RagBlog and tagged Patriotism. Bookmark the permalink.