A Poet’s Legacy : No Rest for the Weary? 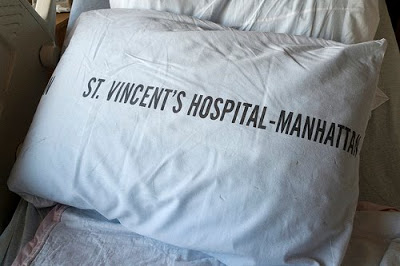 Image from Steve and Sara’s Photostream / Flickr.
Edna St. Vincent Millay and
The profitability of charity

“Thou canst not move across the grass
But my quick eyes will see Thee pass
Nor speak, however silently,
But my hushed voice will answer Thee
I know the path that tells Thy way
Through the cool eve of every day;
God, I can push the grass apart
And lay my finger on Thy heart!”

In 1892 Charlie Bussell, older brother to Cora, soon-to-be mother of Edna was a stevedore on the El Monte. A rather laid back New England lad, while at dock in New Orleans he decided to take a snooze on a bale of cotton. Imagine his surprise when he awoke beneath deck in the hold.

Days later he was discovered, weak and emaciated, and was brought to New York City and put under the care of the Sisters of Charities at St. Vincent’s Hospital. His odd story became a bit of local news and his recovery at the lower Manhattan hospital a huge event in the recorded history of a small Maine mother-led family.

Edna St. Vincent Millay was born at that time and would have been named Vincent if she’d been a boy. After high school she came in second in a national poetry contest, partially by dropping her first name and publishing as Vincent Millay. That recognition got her a scholarship at Vassar and despite a troubled rebellious hyper-poetic existence she created a body of work in a bold daring neo-classical style that inspires to this day.

Perhaps the kinship Ms. Millay felt with the hospital was the result of their common commitment to compassion. Certainly St. Vincent’s was a hospital that cared.

Sadly, the hospital that Edna St. Vincent Millay took part of her name from is today no longer with us. Up until Monday, St. Vincent’s Hospital on Seventh Avenue in New York City had served the Village since 1849.

One of the reasons the facility had to close was that in serving the local poor predominantly, they “couldn’t make a profit.” What a surprise. I wonder how St. Francis managed to make a profit. (Perhaps he wasn’t paying minimum wage.) Medicare cuts and the uninsured also defunded the operation.

Maybe good old Catholic charity was actually part of the Obama socialist agenda. Lord knows we can’t have any of that.

The other well publicized reason for the hospital’s bankruptcy was the profligate board of directors who allegedly ran the place into the ground passing around percs and paying off expensive New Hampshire lawyer pals. Another big surprise in this day and age I suppose. To some people a hospital is just a pile of money with a sideline in serving humanity.

St. Vincent’s was supposed to be building a new facility between 12th and 13th Streets. After frittering away millions on Vice Presidents, property acquisition, lawyers, and world class architects, now it seems there is no money left to construct anything.

The trouble is happy circles cast in concrete don’t weather well and in St. Vincent’s case the structure looks like it would be next to impossible to renovate. I think New Yorkers would have been better served with a stark Catholic facility that showed it’s heart inside. And survived.

Now folks from the Village will have to ambulance crosstown to Bellevue or NYU Medical centers. Good luck finding anyone who cares there.

1 Response to A Poet’s Legacy : No Rest for the Weary?