A. Pogue on Torture and the Law 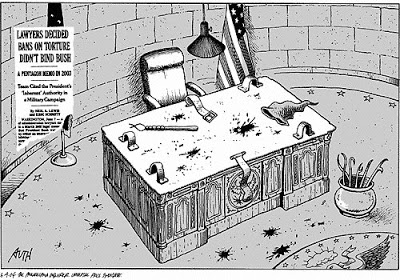 Reflections on torture and criminal procedure.
By Alan Pogue / April 27, 2008 / The Rag Blog

Look at today’s NYTimes report on our fabulous government’s justifications for torture. What they said was, basically, “When we think we might have a terrorist then anything we do is not torture because our intentions are pure and our objective is so darned important.”

Substitute any category you like for “terrorist” and you have the whole issue in a nutcase, or shell. If you think the person may know something then wire their most sensitive body part to the nearest electrical outlet. You cannot be accused of torture since you are an agent of the government which has God on its side. Others, liberals and other fellow traveling wimpy types, may quibble about the Constitution, Bill of Rights, the ridiculous Geneva Convention, probable cause, evidence, but they are all a bunch of One Worlders, commie sympathizers, drug dealers, humanists, tree huggers, Obama loving perverts who would have failed to put all the Japs in prison during WW11.

I am with Steve Russell [see previous post] in thinking that adherence to procedure is good for all of us all of the time. The Supreme Court has, on occasion, voided the conviction of people who were manifestly guilty because of the gross misconduct of the authorities. They don’t do this often enough.

Or, if you prefer, as the Red Queen said,”Verdict first, trial later”.

This entry was posted in Rag Bloggers and tagged Criminal Justice, Torture. Bookmark the permalink.