A. Pogue : The Sad Tale of a Good Samaritan 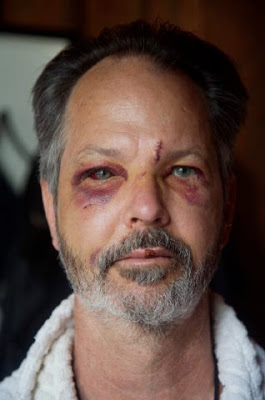 [Ragblogger Alan Pogue was staff photographer for The Rag, Austin’s legendary underground newspaper, in the late sixties and seventies and has served in the same capacity for The Texas Observer. He began his career while serving in Vietnam in 1967. He later documented Texas farm workers and has photographed in Texas prisons, in Cuba, in Iraq and Pakistan, in Latin America and the Caribbean. His book Witness for Justice was published by the University of Texas Press.

Alan’s work has often placed him in physical danger but, as it turns out, none as dangerous as the corner of Chicon and Rosewood in east Austin, Texas.]

A few nights ago I stopped to help a woman who was being beaten badly by two other women. It was 11 p.m. on Chicon and Rosewood in east Austin. I got the two women off the one on the ground but the pimp for the two women (I hypothesize) snuck up from behind and sapped me. I had to spend a few hours at St. David’s and then Brackenridge hospitals so they could scan my head and put a few stitches in my face. I will recover fully but I will require a bit more surgery on my right eye socket, an “orbital floor fracture”.

Looking on the bright side, the pimp didn’t shoot or stab me. My wallet was taken but somebody found it and called me so I got my ID and checks back. This character was smart enough not to try and cash them. The EMS and emergency people said this type of assault is on the rise. They told me about a man who stopped to help someone with a flat tire only to be beaten very badly. Bad times for good Samaritans, so watch out.

I’ll be back on the job in the middle of next week if all the surgery goes according to plan. I am ok with soup and ice cream. Someone gave me a fine bottle of Scotch but I will have to wait to drink it.

It could be that the beaten woman was on the other womens’ turf and the pimp sent them over to run the third woman off. The beaten woman was very thankful to me. We both answered questions put to us by the police. The pimp was upset that I stopped the beating and wanted to show that he was still in charge. After I was assaulted I drove a short distance to my home and splashed water on my face to check myself out. When I returned to the scene the EMS and police were there. I will work with the detective on the case and try to talk to the woman I kept from further injury. There is the possibility that she too was in on a decoy action. I will know she is not if she was willing to identify the women and/or the pimp.

Darn it, I didn’t have a camera on me because it was a short trip to pick up a book to read, “Can Humanity Change?” by Khrishnamurti, kind of ironic. While taking it easy, as my face returns to its normal shape, my mind looks to the wider social context.

Drug dealing and prostitution are a big feature of the stretch of Chicon between Rosewood and MLK in Austin. There are also many churches in the area. Yet the churches do not minister to those most in need. The epicenter of the drug trade, for the impoverished, is 12th and Chicon. This has been the case for decades, sort of an informal red light district. Indigenous eastsiders have been complaining about this crime scene for many years. The police cruise the area frequently but there seems to be no coordinated social services plan to address the problem at its root. Surprise!. No kind and creative approach has been used. Only a minimalist military mind set has been used by the Austin police to maintain an uneasy status quo for this drug district.

The vacant lots are being filled up with new home construction so the territory for illegal activity is shrinking. Much of it has moved down the alley between 12th and 13th off of Chicon. Some truly dangerous characters hang out in that alley (I spotted a fellow with a 12 gauge pump shotgun under his trench coat), so I have not taken to documenting the culture. The open solicitation for drugs and prostitution rises and falls in an unpredictable tide but the activity is constant. Red is the color of the dominant gang so one sees red pants, red caps, red sweat shirts. This level of organization means that there are other people involved who aren’t there.

I see younger people hanging out at the few public coin-operated phones to take drug orders and pass them on to older people. As Jesse Jackson said, “Fourteen year-olds on street corners are not importing drugs. Bankers are importing drugs.”

Many of the people I see at 12th and Chicon are mentally and /or physically impaired. Old people in wheel chairs often sleep on the street in their wheelchairs. More than once I have been offered sex by psychotic homeless women. In the past none of these people has ever done more than offer me drugs or sex. Once I declined they did not persist. Most of the solicitation is done with subtle eye contact so I have learned not to wave back or make eye contact with the solicitors.

In breaking up a fight among three women I stepped into their culture in a big way. The problem all around is that gentrification is forcing two cultures to overlap. I didn’t see “three prostitutes” fighting over territory, I saw one woman being beaten by two other people. They and the pimp made their activity very public in a new overall environment. I wish for the kind and creative approach but as we have seen in Waco and Eldorado, “Shock and Awe” seem to be the only tactics the authorities care to use. When the territory shrinks a bit more”something will have to be done” about what has been ignored for years. The East Side has been the recipient of planned neglect until such a time that it was worthy of being taken over by the West Side and the real-estate interests, both east and west.

I will try and look into the situation for the young woman I saved from a worse beating than she got. Her story should cast light on many forms of neglect in Texas which is always vying for last place in social services.

This entry was posted in Rag Bloggers and tagged American Society, Austin. Bookmark the permalink.

4 Responses to A. Pogue : The Sad Tale of a Good Samaritan