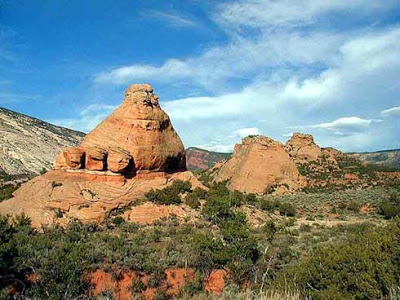 Tim DeChristopher is an economics student at the University of Utah in Salt Lake City. He had just finished his last final exam before winter break. One of the exam questions was: If the oil and gas companies are the only ones that bid on public lands, are the true costs of oil and gas exploitation reflected in the prices paid?

DeChristopher was inspired. He finished the exam, threw on his red parka and went off to the Bureau of Land Management land auction that the Southern Utah Wilderness Alliance called “the Bush administration’s last great gift to the oil and gas industry.” Instead of joining the protest outside, he registered as a bidder, then bought 22,000 acres of public land. That is, he successfully bid on the public properties, located near the Arches and Canyonlands National Parks and Dinosaur National Monument, and other pristine areas. The price tag: more than $1.7 million.

He told me: “Once I started buying up every parcel, they understood pretty clearly what was going on … they stopped the auction, and some federal agents came in and took me out. I guess there was a lot of chaos, and they didn’t really know how to proceed at that point.”

Patrick Shea, a former BLM director, is representing DeChristopher. Shea told the Deseret News: “What Tim did was in the best tradition of civil disobedience, he did this without causing any physical or material harm. His purpose was to draw attention to the illegitimacy and immorality of the process.”

There is a long tradition of disrupting land development in Utah. In his memoir, “Desert Solitaire,” Edward Abbey, the writer and activist, wrote: “Wilderness. The word itself is music. … We scarcely know what we mean by the term, though the sound of it draws all whose nerves and emotions have not yet been irreparably stunned, deadened, numbed by the caterwauling of commerce, the sweating scramble for profit and domination.”

Abbey’s novel “The Monkey Wrench Gang” inspired a generation of environmental activists to take “direct action,” disrupting “development.” As The Salt Lake Tribune reported on DeChristopher: “He didn’t pour sugar into a bulldozer’s gas tank. He didn’t spike a tree or set a billboard on fire. But wielding only a bidder’s paddle, a University of Utah student just as surely monkey-wrenched a federal oil- and gas-lease sale Friday, ensuring that thousands of acres near two southern Utah national parks won’t be opened to drilling anytime soon.”

More than just scenic beauty will be harmed by these BLM sales. Drilling impacts air and water quality. According to High Country News, “The BLM had not analyzed impacts on ozone levels from some 2,300 wells drilled in the area since 2004 … nor had it predicted air impacts from the estimated 6,300 new wells approved in the plan.” ProPublica reports that the Colorado River “powers homes for 3 million people, nourishes 15 percent of the nation’s crops and provides drinking water to one in 12 Americans. Now a rush to develop domestic oil, gas and uranium deposits along the river and its tributaries threatens its future.”

After questioning by federal authorities, DeChristopher was released.

The U.S. attorney is currently weighing charges. DeChristopher reflects: “This has really been emotional and hopeful for me to see the kind of support over the last couple of days … for all the problems that people can talk about in this country and for all the apathy and the eight years of oppression and the decades of eroding civil liberties, America is still very much the kind of place that when you stand up for what is right, you never stand alone.”

His disruption of the auction has temporarily blocked the Bush-enabled land grab by the oil and gas industries. If DeChristopher can come up with $45,000 by Dec. 29, he can make the first payment on the land, possibly avoiding any claim of fraud. If the BLM opts to re-auction the land, it can’t happen until after the Obama administration takes over.

The sales, if they happen, will likely be different, thanks to the direct action of an activist, raising his voice, and his bidding paddle, in opposition.