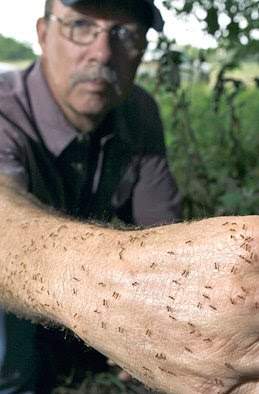 In what sounds like a really low-budget horror film, voracious swarming ants that apparently arrived in Texas aboard a cargo ship are invading homes and yards across the Houston area, shorting out electrical boxes and messing up computers.

The hairy, reddish-brown creatures are known as “crazy rasberry ants” — crazy, because they wander erratically instead of marching in regimented lines, and “rasberry” after Tom Rasberry, an exterminator who did battle against them early on.

“They’re itty-bitty things about the size of fleas, and they’re just running everywhere,” said Patsy Morphew of Pearland, who is constantly sweeping them off her patio and scooping them out of her pool by the cupful. “There’s just thousands and thousands of them. If you’ve seen a car racing, that’s how they are. They’re going fast, fast, fast. They’re crazy.”

The ants — formally known as “paratrenicha species near pubens” — have spread to five Houston-area counties since they were first spotted in Texas in 2002.

The newly recognized species is believed to have arrived in a cargo shipment through the port of Houston. Scientists are not sure exactly where the ants came from, but their cousins, commonly called crazy ants, are found in the Southeast and the Caribbean.

“At this point, it would be nearly impossible to eradicate the ant because it is so widely dispersed,” said Roger Gold, a Texas A&M University entomologist.

But the ants also like to suck the sweet juices from plants, feed on such beneficial insects as ladybugs, and eat the hatchlings of a small, endangered type of grouse known as the Attwater prairie chicken.

They also bite humans, though not with a stinger like fire ants.

Worse, they, like some other species of ants, are attracted to electrical equipment, for reasons that are not well understood by scientists.

They have ruined pumps at sewage pumping stations, fouled computers and at least one homeowner’s gas meter, and caused fire alarms to malfunction. They have been spotted at NASA’s Johnson Space Center and close to Hobby Airport, though they haven’t caused any major problems there yet.

Exterminators say calls from frustrated homeowners and businesses are increasing because the ants — which are starting to emerge by the billions with the onset of the warm, humid season — appear to be resistant to over-the-counter ant killers.

“The population built up so high that typical ant controls simply did no good,” said Jason Meyers, an A&M doctoral student who is writing his dissertation on the one-eighth-inch-long ant.

It’s not enough just to kill the queen. Experts say each colony has multiple queens that have to be taken out.

At the same time, the ants aren’t taking the bait usually left out in traps, according to exterminators, who want the Environmental Protection Agency to loosen restrictions on the use of more powerful pesticides.

And when you do kill these ants, the survivors turn it to their advantage: They pile up the dead, sometimes using them as a bridge to cross safely over surfaces treated with pesticide.

“It looked like someone had come along and poured coffee granules all around the perimeter of the rooms,” said Lisa Calhoun, who paid exterminators $1,200 to treat an infestation of her parents’ home in the Houston suburb of Pearland.

The Texas Department of Agriculture is working with A&M researchers and the EPA on how to stop the ants.

“This one seems to be like lava flowing and filling an entire area, getting bigger and bigger,” said Ron Harrison, director of training for the big pest-control company Orkin Inc.

This entry was posted in RagBlog and tagged Ecology, Nature, Texas. Bookmark the permalink.