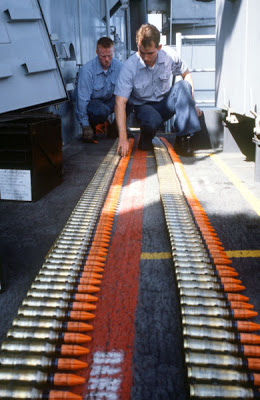 US and UK forces continue to use depleted uranium bullets, shells, and defensive armor plating in Iraq

In the June 30 issue of Tacoma’s The News Tribune, readers from Washington got to read the attack on Governor Gregoire in “Gregoire’s inaction cost jobs, say Tri-Cities leaders”. In this piece that describes the rationale behind the Governor’s refusal to court the supreme federal God, Uranium, we get a glimpse of just how easily a state official can be lambasted for refusing to get into bed with the nuclear industry.

Another story exists within the story, however, which demonstrates how education around the dangers of what is deceptively labeled “Depleted Uranium” has saved both the day – and the very lives – of countless current and future generations of Washingtonians. Apparently, good news to those who appreciate a clean and healthy environment, some anti-nuclear activists got through to Governor Chris Gregoire of Washington, as it was reported, “The hang-up for Gregoire was the proposed plant’s waste stream of depleted uranium, a dangerous chemical with low levels of radioactivity.”

What exactly happened that influenced the life-preserving move for Washington? Apparently, the Governor had been concerned about a backlash by environmentalists that impacted her decision not to push to play host state to a proposed Uranium enrichment plant.

It is reported that the lack of energetic courtship on the part of Governor Gregoire influenced the decision made by French nuclear giant, Areva, to choose Idaho over Washington for its newest $2 Billion Uranium enrichment plant. In a May 7 Axis of Logic article, this writer had predicted this decision at that time, reporting, “The federal government is entering into what is quite literally dangerous territory with its plans to fully support yet another uranium enrichment plant certain to harm the good people of Idaho.”

Idaho’s somber news is certainly better news for Washingtonians – and residents of Ohio, Texas, and New Mexico, states that were also passed over in the decision. But for Washington, this is special reason for anti-nuclear activists to celebrate, as the state already has its hands full of massive hazardous waste at its 120 square mile Hanford Site, with its underground plume of Tritium, Chromium, Strontium-90 and Uranium, 18 square kilometers – nearly 7 square miles in size. 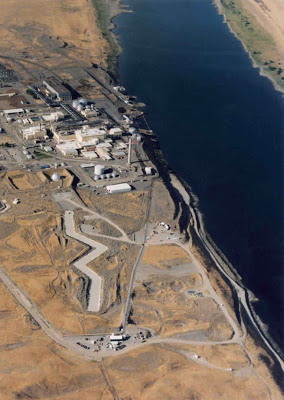 Hanford Nuclear Facility, Washington
With contamination of twenty (20) percent of its Columbia River shoreline, Hanford is, hands down, the most contaminated nuclear site in the country, with a more than $50 Billion price tag for clean up projected to continue through the end of 2019.

A hazardous legacy with 50 years of plutonium production to be passed down to future generations of Washingtonians, one study showed those living downwind of the Hanford facility experienced high incidences of cancers of all types. With the prospect of being stuck with another nuclear wasteland, one can understand why Washington activists took none too kindly to the construction of a Uranium enrichment plant certain to add to their state’s current radiological holocaust.

Yet while Washingtonians are off the hook from having to accommodate Areva’s Uranium poison factory, one can’t help but feel sorry for the poor residents of Idaho, whose state has been awarded the contract. Whatever did Idahoans do that was sufficiently bad to merit radioactive particulates blowing in their winds, poisoning their air, water and soil? Haven’t the good people of Idaho suffered enough cancer already from radioactive atomic bomb fallout exploded in Nevada?

I guess we could simply say, that’s Idaho’s business, right? In actuality, it is our business, too. Radiation emitted from any nuclear power plant, Uranium enrichment plant, or from munitions used in either combat or in “testing” at proving grounds and military bases does not stop magically at the state line. Invisible radionuclides – atoms of ionizing radiation – travel in the atmosphere for great distances through the winds.

Whether speaking about the nuclear gasses of Chernobyl that contaminate Europe, Russia, and eventually the Arctic Ocean, the US atomic bomb blasts that spread radiation from Nevada clear up to New York and Maine, or the radioactive Uranium oxide spread through Europe to the UK within a week of the “Shock and Awe” bombing of Baghdad, radionuclides are carried thousands of miles through the winds and can also leach underground into groundwater, affecting drinking water.

What about our food supply, which is contaminated wherever radionuclides land on the soils in which crops are grown? In Idaho, the airborne dispersal hits “home” for many of us who enjoy Idaho baked potatoes but are less than thrilled at the prospect of glow-in-the-dark spuds. It is important that potato lovers ‘round the country realize their favorite starch is grown in the same state which already houses another DOE public health disaster – the Idaho National Laboratory with its tens of millions of cubic feet of radioactively contaminated soil and the Snake River Aquifer.

The Idaho National Laboratory is one of 9,900 nuclear production facility contaminated sites “under assessment” by the DOE. Roughly translated, this means experts are scratching their heads, asking one another what in blazes they are going to do with this mighty nuked, bombed-out, country.

In a 7 year, $2.9 Billion clean-up project affecting the drinking water of 300,000 eastern Idaho residents, Plutonium – to the tune of one metric ton – is but one of the eighteen (18) contaminants of concern at the Idaho Laboratory.

With the Laboratory’s stated mission to “support our government’s role in leading the revitalization of the nation’s nuclear power industry and re-establishing U.S. world leadership in nuclear science and technology,” expansion of nuclear power and weapons technology continues to be the driving force of not just the Idaho Laboratory, but the DOE itself, without regard of cost to human health or environment.

An example of the impact of Uranium used for weapons by the Idaho National Laboratory involves risk calculations which indicate individuals living adjacent to the hazardous landfill even 1,000 years from now will have a greatly increased chance of contracting cancer from plutonium exposure due to inhalation of contaminated air and ingested foods grown nearby. Uranium materials left from nuclear processing at the site will continue to emit radiation, contaminating the earth and groundwater for far longer. 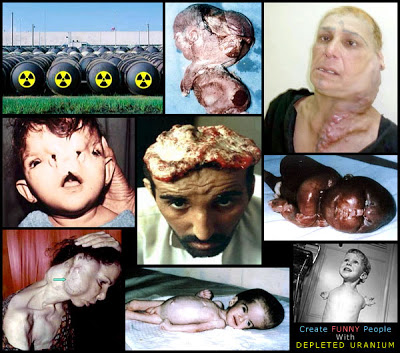 Some Effects of Depleted Uranium Poisoning
All of these serious and lingering nuclear disasters aside, Idaho’s Governor “Butch” Otter is still mighty proud his state’s been chosen as the winning site for even further radiological contamination. Witness the beaming pride of a Governor who had cast his net and pulled in the grand prize – a future hazardous National Superfund Site – in this May 14, 2008 quote made by Governor Otter after AREVA announced its decision: “Along with that kind of infrastructure and expertise, government regulations, market forces and most of all the watchful eyes of 1.4 million Idahoans all will ensure that the AREVA plant will be safe, clean and an enormous economic benefit to our state. AREVA’s decision is a testament to the hard work and progressive mindset of Idaho’s people, and the growing diversity and dynamism of our economy. There is a long way to go before AREVA’s promise becomes reality, but we already have proved that nothing is beyond our capability.”

It is certainly curious to see that a Governor knows nothing at all about how Uranium enrichment plants work, evidenced by the fact he calls them “safe” and “clean.” Were there perhaps no Idaho activists to instruct their Governor any better than that? Moreover, in true Orwellian politico-speak, words and their meanings are often deceptively reversed. For the day the word “progressive mindset” is equated with polluting the environment with radioactive gasses is the very day environmental activists must start calling ourselves “conservatives.” We are, after all, on a mission to conserve – as in save – the planet and our very lives, are we not?

In stark contrast, the fact that Washington’s Governor Gregoire realized that Depleted Uranium would endanger her constituency – and the environment – is most likely due to the work of on–target environmentalists who would not allow her to forget Hanford… not in a Manhattan Project minute!

No doubt these anti-nuclear activists had done their homework on the voluminous research that exists which links chemically toxic and radioactive Uranium with health effects such as cancer, diabetes, neuro-muscular degenerative disease, birth defects, cardiac problems, thyroid disease, and auto-immune system diseases. Before we, therefore, drink another Uranium-contaminated glass of water, eat tonight’s Idaho baked potato, or inhale our very next breath of air? It would be more than wise to take a few minutes of our time to discover which radioactive sites are located in our area.

We must work hard to shut down nuclear power plants and facilities used to produce nuclear materials and weapons and clean up the ones already shut down. For a genuine “nuclear renaissance” is now upon us – whereby the Nuclear Regulatory Commission expects to receive (and, in all probability, will approve) applications for the construction of 34 new nuclear reactors.

All new nuclear reactors – for the sake of our kids and their kids… must be fought tooth and nail. Failure to do so will, quite literally, make radionuclides like Strontium-90, only one of over 100 harmful chemicals emitted from nuclear reactors that enter the body, become a permanent part of teeth and bones.

Washington is a prime example of how anti-radiation activists fighting nuclear contamination in their state can have a critical impact on decisions made in the current nuclear revivalist onslaught in America. We must both educate others about the hazards of life-destroying radioactivity released into our environment and also confront our legislators and other government officials, opposing nuclear contamination in all its lethal forms.

The dirty “business” of Uranium looms ominously in America’s future, spelling disaster for our nation’s environmental and public health. Yet, even still, there is hope that this trend will be slowed and eventually stopped – as is evidenced by environmentalists who made an undeniable impact on the decision of Governor Gregoire from Washington – one which will undoubtedly save countless lives.

One is tempted to wonder what an intensive opposition waged by a large and dedicated coalition of anti-nuclear activists might have accomplished in Idaho… had they only been able to “get through” to the Governor. Unfortunately – and most tragically – for both Idahoans alive today and for many generations to come, that question will never be answered.

An explanation of the Uranium production process appears on the Nuclear Information Referral (NIRS) website.

In addition, an entire website filled with scientific research devoted to the topic of the harm of radioactivity to humans is available for viewing at the Radiation and Public Health Project website. Another good resource on the health costs of low-level ionizing radiation is available here.

Cathy Garger is a regular guest contributor to Axis of Logic. She is a freelance writer, public speaker, activist, and a certified personal coach who specializes in Uranium weapons. Living in the shadow of the national District of Crime, Cathy is constantly nauseated by the stench emanating from the nation’s capital during the Washington, DC, federal work week. Cathy may be contacted at savorsuccesslady3@yahoo.com.

This entry was posted in RagBlog and tagged Environment, Social Action, U.S. Government. Bookmark the permalink.