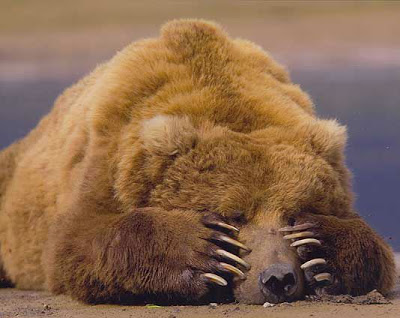 Keeping the bear at bay:
Jubilee Vouchers and a complete stimulus plan

If we don’t get a serious world-historical plan in place before the real Bear Market hits we’ll soon be thinking of ‘mere unemployment’ as the good old days.

In a world where one class manufactures credit and the other class clings to hope, how bad can a debt economy be? Of course, we could have that long-awaited revolution where the hopeful class clobbers the lending class and puts an end to the disparities that make borrowing necessary. But what would happen the week after that?

On the other hand we could recover the wisdom of the legendary Jubilee by placing the lending class on notice that every seven years we’re going to have a write-down party, beginning with the summer of 2009.

I offer this as a “mustard seed” (with kudos to Larry Kudlow for the Gospel term that he applies to the salvation of capitalism). Jubilee Vouchers could be sown into “green shoots” and harvested as part of the next stimulus plan. If such debt-relief were offered directly to all the people, all at once, you would surely short the future of any politician who tried to get in the way.

The only moral problem with this idea is how to respect and reward all the good people who didn’t get caught up in debt mania. We should acknowledge their moral superiority and sacrifice.

Therefore, the Federal Reserve Bank shall distribute to each taxpayer a book of Jubilee Vouchers totaling $10,000 which shall be accepted by any creditor in return for debt relief. Any unused Jubilee Vouchers held by people of moral superiority and good sense may be presented to the IRS for tax credits that will be good for as many years as the balance may last.

We’ll let the big brains at the Federal Reserve Bank work out the technicalities of what happens next. Maybe they can open up a $2.25 trillion jubilee line of credit to be paid down with interest from the lenders they support. They could call it The People’s Bank.

Or the Fed could refuse to redeem Jubilee Vouchers from lenders who have proven to be predatory, forcing them into immediate bankruptcy. Where the Fed is concerned the world has full faith that when it comes to credit, if there’s a will, there’s a way. (Cap and trade on the national debt anyone?)

Perhaps there is a moral concept of modern economics that will be transgressed by the revival of Jubilee wisdom, but since we’re borrowing our financial language from the Gospel, why not invite those without financial sin to cast the first stones?

For example, there are people who get paid by huge broadcasting conglomerates who sometimes puff themselves up as saints — as if the whole credit scheme never leaks into the advertising budgets that fund their creditable livelihoods. We could invite them to stone us, but they’d stone us anyway.

The point is that credit mania became a thoroughgoing social mood that ate and fed all of us with the same collective spoon. Nobody stopped it why? Because we were all hooked into the accelerated experience of the leveraged life.

Since we haven’t got the appetite to prosecute debt pushers or their officious collaborators, and since it is probably true what Greenspan says — that we will never outlaw greed — at least we might offer some meaningful ritual comforts to all the addicts who get left with nothing but the spasm of withdrawal.

In addition to Jubilee Vouchers, two other fronts need funding — which we can visualize via that odd couple at CNBC, Cramer and Kudlow.

Jim Cramer says we need a real New Deal jobs program. Kudlow says we need business tax cuts. Publisher Mortimer Zuckerman has joined issue with Cramer in calling for a real job-stimulus program. And any number of old supply-siders are lining up along the Kudlow-Laffer axis to fight for Capital first.

But enough of the bickering already. Do we need labor or capital? Cramer or Kudlow? Why not both?

Fact is, there are very few of us behaving like part of the solution these days, and Congress could probably get all this done in early August if we make it a condition of their summer break. Get Zuckerman to print the bill, roll it down the aisle in a wheelbarrow, and nothing of the usual diligence or transparency of American democracy would be sacrificed

But if we don’t get a serious world-historical plan in place before the real Bear Market hits we’ll soon be thinking of “mere unemployment” as the good old days.

[Greg Moses is a frequent contributor to these pages. He can be reached at gmosesx@gmail.com.]

This entry was posted in Rag Bloggers and tagged Economic Recovery, Economic Stimulus. Bookmark the permalink.