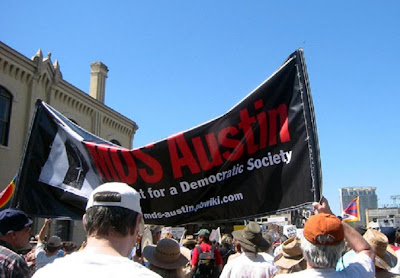 AUSTIN — On a balmy Saturday afternoon in Austin, Texas – the little sweet spot in the hilly heart of the Lone Star State – more than 1,000 musicians and peace activists gathered at the Texas State Capitol building, then snaked through the streets of downtown Austin and descended on City Hall for a three hour peace jam and concert, all in protest of the war in Irag on this, the fifth anniversary of the invasion.

Musicians, some on foot and others performing from floats, makeshift trains and art cars, played tubas and trumpets and bagpipes and drums. Groups of strolling guitarists strummed and sang, “We ain’t gonna study war no more.” Waves of demonstrators stretched for blocks – young people and old, students and Iraq vets and old hippies, with dogs and children, carried banners, waved signs and danced in the streets. One young man carried a placard proclaiming “The Beginning is Near!”

The Million Musicians March, from noon-4 p.m on Saturday, March 15, 2008, was organized by Instruments for Peace and endorsed by 15 other peace and justice groups from the area, including the Movement for a Democratic Society (MDS), CodePink and The Crawford Peace House, known for its anti-war vigils near President Bush’s ranch. The march was part of the monthly national Iraq Moratorium activities in opposition to George Bush’s Middle East occupation.

Led by the Jericho Marching Brass Band, who were joined by other musicians in traditional second-line fashion, they chanted and boogied down Austin’s famed Sixth Street strip, past blocks of bars and music venues where tourists and musicians packed the sidewalks. The crowds, in town for South by Southwest, Austin’s annual mega music fest, waved and flashed peace signs. And many joined the parade.

[South by Southwest is a massive yearly talent showcase and festival that this year has brought over 1,700 bands from all over the world and thousands of music aficionados to the streets and venues of Austin. Live music is shouting out from every conceivable club and hall in this music-crazed town, and from virtually any outdoor space large enough to accommodate a makeshift stage. This week’s SXSW has been highlighted by a showcase performance from the resurgent R.E.M. and a keynote speech by Velvet Underground founder Lou Reed.]

Instruments for Peace is an Austin-based network of musicians who work with grass-roots activist organizations “in support of peace, justice and sustainability worldwide.” And, they say, “to have an effect on public dialogue.” To help create a “spin machine for truth.”

This year’s Million Musicians March is the latest sign of an increasingly energized peace and justice movement in Austin, long known as a center for progressive politics and alternative culture.

And a Little Historical Perspective…

We are definitely back in charge. Reminds me of the Pull Out Dick daze parade when we wanted Nixon to get the troops out of Viet Nam. The chant was started by Bob Sternberg, a talented writer who is no longer with us.

My brother and I had large red marks-a-lot peace signs on the back of our t-shirts. It was hot. I think my back still has that peace sign on it. As I recall, we were maced when we arrived at the Capitol from the Drag. Jeff Friedman was our leader that day. He was later elected mayor of Austin. He is no longer with us. But we are out of Viet Nam. We Won!

I love this article. I hope you will add a blurb to the Rag Blog that includes “an attractive, strutting baton twirler led the peace parade.” The parade was on channel 8, in case you haven’t seen it!!!

1 Response to A Thousand Spirited Marchers Fill Streets of Austin