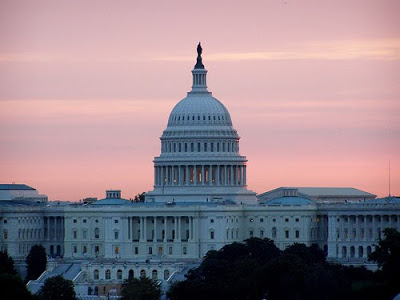 Image from Climatico.
Devil’s brew:
Curse of the climate bill

Legend says curses come in threes. Let’s pray that doesn’t happen with the unholy trinity of the Corporate Climate Bill

It demands drilling for oil, digging for coal, and big money for new nukes. How such a devil’s brew could help save the Earth conjures a corporate cynicism beyond the scope of the human mind and soul.

It all now bears a special curse. It was meant for Earth Day. Then it slipped to the April 26 Chernobyl anniversary. But co-sponsor Lindsay Graham (R-SC) pitched a fit over immigration and pulled his support.

As did Earth herself. Just prior, more than two dozen hill country miners were killed in a veritable Three Mile Island of black carbon. This entirely avoidable accident was built on years of sloppy denial by King Coal and the tacit assent of pliant regulators. With mountains of offal being pitched into rivers and streams, and underground hell holes filled with gas and soot, coal has been slaughtering people and eco-systems here for more than a century. Now, as at TMI, the death has become visible.

Meanwhile, the undersea gusher destroying the Gulf of Mexico may soon pour up the east coast. Like Chernobyl, it defies comprehension.

As the Soviets denied it, Chernobyl gushed radiation that killed some 985,000 people. Based on more than 5,000 studies, a definitive assessment has been authored by three Russian scientists, issued by the New York Academy of Sciences, that should serve as the ultimate warning against atomic energy.

But the third leg of the Climate Bill trifecta has — thankfully — yet to kick in. Like coal and oil, America’s 104 licensed nuclear plants are a catastrophe in progress. They all leak lethal radiation on a regular basis. Their wastes are unmanageable. They emit greenhouses gases in their vital fuel cycle. They pump untold quantities of heat into the air and water. They are sitting ducks for terror and error.

Our aging fleet of rickety reactors continually flirts with disaster. Many are on or near active earthquake faults. Turkey Point, in south Florida, was directly hit by Hurricane Andrew. Ohio’s Davis-Besse came within a fraction of an inch of a breach of its inner containment. A new inspection has shown more than 2 dozen potentially critical new flaws there.

New York’s Indian Point and New Jersey’s Oyster Creek, along with their radioactive siblings, are super-heating the rivers, lakes, bays and oceans on which they sit. Embrittlement, decaying hardware and an overall aging process have this country riding the radioactive brink every moment.

On September 11, 2001, terrorists flew directly over the Indian Point reactors on their way to the World Trade Center.

America’s reactors constitute less than a quarter of those operating worldwide. Despite their inability to get private financing or liability insurance, the Obama Climate Bill is larded with billions in handouts for new reactor construction. Yet the first reactor design proposed (for Georgia) has been strongly criticized by the Nuclear Regulatory Commission, and a key financing scheme has been voided by the courts.

Only one Climate Bill can solve our energy crisis — a Solartopian program for converting the entire economy to renewables, conservation, and efficiency. It would fly in the face of the corporate destroyers who are behind the current Climate Bill. But these are technologies that actually work, that pay, that create jobs and prosperity, and that will preserve rather than destroy our sacred Earth.

The atomic shoe could be dropping as you read this. It is a catastrophe we cannot afford — ecologically, financially, economically, spiritually.

These old reactors must shut before they irradiate the apocalyptic footsteps of their fossil fueled brethren.

The Curse of the Climate Bill is upon us. Let’s transform it to something truly green before it kills again.