Abstention: The Vote of the Unrepresented

Why don’t we have the choice “None of the above” on our ballots? It is a legitimate question and one that an honest electoral reform would address. The big piece of election reform can never be enacted as long as lobbyists remain such a powerful force in the US. When corporate and private finance is removed from all elections and replaced by closely-regulated public finance, we will achieve a modicum of meaningful election reform. 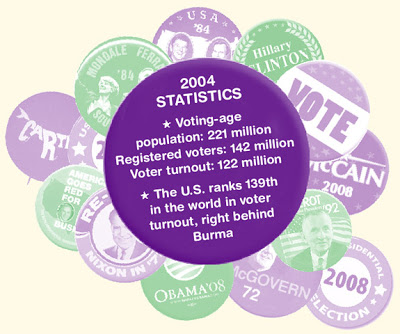 Legions of people opt out of voting in the U.S. But they are not civic slackers. They’re on to something. Whether disinterested or disgusted, they are casting a vote of no confidence in the electoral system. And it is entirely justified.

The real point of elections is to get enough people voting to legitimize the authority of politicians. Then, they can drag us into wars, bail out bankers in the middle of an economic meltdown, and “earmark” tax dollars to their biggest donors. It happens at every level of government, from City Hall to the White House.

Just as riot is the language of the unheard, abstention has become the vote of the unrepresented. In a debate on voter apathy, blogger Bud Wood put it this way: “It just doesn’t make much difference who or what gets into office. The results are more of the same.”

Whose democracy? There are 100 million nonvoters in the U.S., and they are overwhelmingly people who are economically disenfranchised. They are poor, young, disabled, unemployed and foreign-born, especially Asian and Latino.

Only 48 percent of folks in the bottom income bracket go to the polls. Compare this to 77 percent among those with annual incomes above $50,000. Those earning over $100,000 per year make up 15 percent of eligible voters, but 19 percent of actual ballot-casters. And this percentage rises on up the wealth ladder.

But even active voters are turned off. A study called the “Vanishing Voter” showed disenchantment among voters and abstentionists alike. More than 75 percent felt that “candidates will say almost anything to get elected.” Over one third agreed that “most politicians are liars or crooks.” The only statement that doubled in support among nonvoters was that “Republicans and Democrats are alike.”

It’s true. Big bucks dictate the agendas of both parties. In 2008, Obama and McCain will set new records for spending —over a half billion dollars. Goldman Sachs and JP Morgan, champions of banking and investment deregulation, are top donors to Obama and Biden, a darling of credit card sharks. Exxon and Chevron back McCain and Palin, a proselytizer for drilling in the Alaska Wildlife Refuge.

Even new Democrats and Republicans find it difficult to enter government. In 2006, 407 House seats were up for reelection, with 383 held by incumbents. Of these incumbents, 94 percent prevailed, because they got all the money and media. A good many ran unopposed! This helps explain why turnout drops well below 40 percent during midterm elections.

Meanwhile, workingclass voters are kicked to the curb. Take Latinos for example. Voter forums showed that their concerns include basics such as “buying gas or buying food,” insufficient medical care, soaring war costs, and immigration. So what do both parties offer? Nothing.

On healthcare, McCain and Obama leave untouched the sacred profits of the medical/pharmaceutical industry. On immigration, they offer more crackdowns.

It’s rigged! Actually, many abstainers would vote if they could. Other countries give people a day off to go to the polls, but not the U.S.

In 2004, 45 percent didn’t vote because they were too busy or exhausted, disabled or ill. Another 12 percent were stopped by registration problems, inconvenient polling locations and transportation issues. Translation? This means millions of workingclass voters face insurmountable obstacles, from electoral incompetence to outright dirty tricks on the part of politicians.

In Florida, the notorious ballot software is still flawed, and polls close by 7 p.m. A county in Virginia recently misled students to believe they could lose dependent tax status — and the benefits that bestows — if they registered to vote at their school address. In Wisconsin, the attorney general wants to cross-check every voter who registered since January 2006. This means long voting lines and disenfranchisement for those who can’t resolve discrepancies, including typos.

The list goes on. And systemic, undisguised racism explains why the overwhelming majority of those denied the vote each election are workingpeople of color.

Another 4-5 million are disenfranchised by states that deny the vote to ex-felons, 36 percent of them African American. Noncitizens have no representation, even though they are affected by everything the government does and may have lived here for years.

Minor parties? With such a gap between politicians and people, third parties should flourish. Instead they are blockaded by the money and might of the Democrats and Republicans. Election laws, written by the major parties, make it extremely difficult for minor parties even to appear on the ballot.

Outrageous rules, media censorship, private financing of campaigns, and sheer thuggery have marginalized political parties that compete with labor’s fake friend, the Democratic Party. This includes even parties like the Greens, who simply want to reform capitalism.

It’s not people who vote socialist or Green who throw away their votes. The system does it! U.S. elections are “winner take all.” If a socialist gets 20 percent of the vote, a Green gets 15 percent, and a Democrat gets 51 percent — all votes go to the Democrat.

Things weren’t always so sewn up. At the start of the 20th century, socialists ran on explicitly pro-labor, anti-capitalist platforms. And they won seats — more than 1,200 offices nationwide.

To eliminate the threat this posed, the Democrats and Republicans launched a political witch-hunt. Socialist party offices were raided, pro-labor representatives were denied their seats, radicals were tossed in jail, and restrictive ballot laws were passed.

Raise hell, whoever wins! After this country revolted against the English king, only a few white men with money and property could vote. The fight to gain the franchise by workers without land and Blacks and women was long and brave. It presumed that voting equals democracy and is the path to making society better.

If only it were true. Instead, wealth has concentrated into the hands of fewer people, alongside political power.

The economic elite write the laws to meet their needs. Karl Marx called it bourgeois democracy: by and for the capitalists. Its opposite is democratic socialism: the economic and political rule of the majority, the working class.

Today, politicians may look and sound more like ordinary working people; history is being made with the first Black Democratic presidential nominee and female Republican vice-presidential candidate.

But the empire under the make-over hasn’t changed.

Both parties put on quite a spectacle during elections to persuade voters of how different they are. Election 2008 is no exception. And true, there are minor differences. But whoever wins, things keep getting worse for working and poor people — whether they vote or abstain.

The answer is ringing in a whole new social system, and the way to get there isn’t at the ballot box. The route is through mass radical action that will settle for nothing less.

But your vote isn’t worthless. Send a message — use it to protest your false choices and demand real ones!

Then follow the advice of union organizer Mother Jones. More than a century ago, she declared, “I have never had a vote, and I have raised hell all over this country. You don’t need a vote to raise hell! You need convictions and a voice!”

Linda Averill, a bus driver and union activist, has twice run for Seattle City Council on the Freedom Socialist Party ticket. Email her at LindaEAverill@peoplepc.com.

This entry was posted in RagBlog and tagged Electoral politics, November Election. Bookmark the permalink.

1 Response to Abstention: The Vote of the Unrepresented