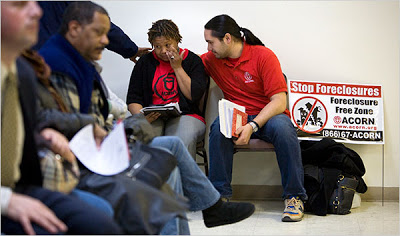 Jonathan Westin, an Acorn organizer, comforted Denise Parker, whose house was being foreclosed on, after she spoke at an Acorn training session in Brooklyn. Photo: James Estrin/The New York Times.
A Bid to Link Arms Against Eviction
By Fernanda Santos / February 17, 2009

As resistance to foreclosure evictions grows among homeowners, community leaders and some law enforcement officials, a broad civil disobedience campaign is starting in New York and other cities to support families who refuse orders to vacate their homes.

The community organizing group Acorn unveiled the campaign with a spirited rally on Friday at a Brooklyn church and will roll it out in at least 22 other cities in the coming weeks. Through phone trees, Web pages and text-messaging networks, the effort will connect families facing eviction with volunteers who will stand at their side as officers arrive, even if it means risking arrest.

“You want to haul us out to jail? Fine. Let the world see how government has been ineffective,” Bertha Lewis, Acorn’s chief organizer, said in an interview. “Politicians have helped banks, but they haven’t helped families in the way that it’s needed, and these families are now saying, enough is enough.”

At the onset of the foreclosure crisis, the problem was regarded by some as one of a homeowner’s own making, the result of irresponsible decisions made by families who chose to live beyond their means. But as foreclosures spread across the country, devastating even solidly middle-class communities, the blame has slowly shifted to the financial companies that made questionable loans and have received billions of dollars in federal aid to stave off collapse.

In recent months, a budding resistance movement has grown among Americans who believe they have been left to face their predicament on their own — and the Acorn campaign is an organized expression of that frustration, Ms. Lewis said. Instead of quietly packing up and turning their homes over to banks, homeowners are now fighting back.

On Feb. 9, a man scrawled a message on the roof of his house in a suburb of Los Angeles: “I Want 2 Be Heard.” Then he barricaded himself inside when deputies showed up to evict him, surrendering after a few hours. In October, a woman in San Diego chained herself to her front porch after the bank that held her mortgage refused to renegotiate the terms. She remains in her home, but has received a second eviction notice.

And last year in Boston, neighbors and activists locked arms outside eight buildings that had been foreclosed upon to prevent the authorities from forcing residents onto the streets.

Sheriffs in some places have also taken a stand. In Wayne County in Michigan, Sheriff Warren C. Evans, suspended all evictions starting Feb. 2 until the federal government implements a plan to help homeowners facing foreclosures.

In Cook County in Illinois, which includes Chicago, Sheriff Thomas J. Dart directed a lawyer to review all eviction orders to protect people who kept on paying rent after the buildings where they lived had been seized by banks. In Butler County in Ohio, Sheriff Richard K. Jones ordered his deputies not to evict people who had no place else to go.

“This is a cold place in the winter and I will not give people a death sentence for not paying their debts,” Sheriff Jones said in an interview. “These are human beings, responsible middle-class people who fell on hard times, and I just can’t toss them out onto the streets.”

Acorn’s strategy is modeled on a movement the group led in the 1980s, when squatters occupied and set out to renovate thousands of abandoned city-owned buildings in New York, Philadelphia and Detroit, among other cities. The motivation was to solve what Ms. Lewis has called “the working family’s housing crisis.”

In cities like Orlando, Fla., which has one of the nation’s highest foreclosure rates — and Boston, Houston, Baltimore, Oakland, Calif., and Tucson, Ariz. — Acorn organizers have been creating networks to alert a homeowner’s neighbors when an eviction has been scheduled or deputies are on the way. Some volunteers will summon friends and relatives to converge at the home, while others will be in charge of notifying the news media. Organizers are also recruiting lawyers willing to defend for no fee those who are arrested.

The campaign, called Home Defenders, enlisted about 500 participants during meetings held Friday and Saturday in New York and five other cities. Ms. Lewis and other organizers said that they believed the number will reach into the tens of thousands within weeks.

“This is a desperate, last-ditch effort by folks who are working two or three jobs, single mothers, elderly people who don’t know what else to do to save their homes,” said Ginny Goldman, Acorn’s lead organizer in Texas, where the campaign began in Houston on Saturday.

The rally in Brooklyn, at Brown Memorial Baptist Church in Fort Greene, drew about 150 people. There were homeowners, Acorn members, community advocates and candidates for the City Council. One councilman, Mathieu Eugene, was carrying a slab of papers as thick as a large dictionary, each sheet representing, he said, a family facing foreclosure in his district, which includes parts of Crown Heights, Flatbush and Kensington.

The church’s pastor, the Rev. Clinton M. Miller, opened the gathering with this prayer: “If anybody here is facing foreclosure, God, we ask that a miracle be made and a home be saved.”

Then, between homeowners’ sharing their plight, the crowd chanted, “Enough is enough.”

One homeowner, Myrna Millington, 73, who lives in Laurelton, Queens, said that she had to take a second mortgage on her home of 38 years to pay for repairs that turned out to be more extensive than originally planned. What Ms. Millington did not know was that she had signed for a subprime loan, which carried interest rates so high she could not keep up with the payments. Her house was foreclosed on in September.

“I may lose my home, but I’m only leaving in handcuffs,” Ms. Millington said.

Another homeowner, Denise Parker, a mother of three who works as a housekeeper at two Midtown Manhattan hotels, bought a home in Springfield Gardens, Queens, in 2005 with an adjustable interest rate that, after two years, went up every six months. Her payments started at $3,500 and now are $5,050 a month, she said. She fell behind last year and her house is scheduled to be auctioned off on Friday.

“I refuse to leave the home that I’ve worked so hard to keep,” Ms. Parker, 42, told the audience. “I will not let the bank take my home and I will not leave.”

Eviction resistance actions are scheduled for Thursday in cities including New York, Oakland and Houston. Organizers will try to recruit enough volunteers to form a human wall on the sidewalk to avoid being arrested for trespassing. But occupying a house or having people attach themselves to a home could also be a tactic.

The campaign has earned praise and raised concern. Sheriff Dart, in Illinois, said it was a “slippery slope when you have individuals deciding whether they can lawfully remain in their homes.”

Sheriff Jones, in Ohio, equated the planned resistance to “chaining yourself to a tree that’s about to be cut down” and said that though he may not agree with it, he sympathizes.

In Washington, Acorn has found a staunch supporter in Representative Marcy Kaptur of Ohio, who, during a discussion last month about the $700 billion bailout package for financial companies, took to the floor of the House and instructed people to “stay in your homes — if the American people, anybody out there, is being foreclosed, don’t leave.”

In an interview, Ms. Kaptur said, “I’m thrilled that the American people are rising up and exercising the power that Wall Street has taken away from them.”

This entry was posted in RagBlog and tagged Banking, Bankruptcy, Foreclosures, Housing Crisis. Bookmark the permalink.