Acting Against the Agents of War Crimes 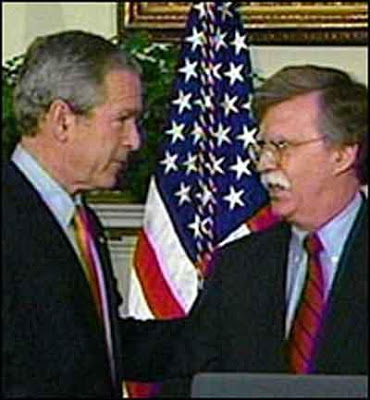 War Criminals Must Fear Punishment: That’s why I went for John Bolton
By George Monbiot / June 3, 2008

As long as the greatest crime of the 21st century remains unprosecuted, we all have a duty to keep the truth alive

I realise now that I didn’t have a hope. I had almost reached the stage when two of the biggest gorillas I have ever seen swept me up and carried me out of the tent. It was humiliating, but it could have been worse. The guard on the other side of the stage, half hidden in the curtains, had spent the lecture touching something under his left armpit. Perhaps he had bubos.

I had no intention of arresting John Bolton, the former under-secretary of state at the US state department, when I arrived at the Hay festival. But during a panel discussion about the Iraq war, I remarked that the greatest crime of the 21st century had become so normalised that one of its authors was due to visit the festival to promote his book. I proposed that someone should attempt a citizens’ arrest, in the hope of instilling a fear of punishment among those who plan illegal wars. After the session I realised that I couldn’t call on other people to do something I wasn’t prepared to do myself.

I knew that I was more likely to be arrested and charged than Mr Bolton. I had no intention of harming him, or of acting in any way that could be interpreted as aggressive, but had I sought only to steer him gently towards the police I might have faced a range of exotic charges, from false imprisonment to aggravated assault. I was prepared to take this risk. It is not enough to demand that other people act, knowing that they will not. If the police, the courts and the state fail to prosecute what the Nuremberg tribunal described as “the supreme international crime”, I believe we have a duty to seek to advance the process.

The Nuremberg principles, which arose from the prosecution of Nazi war criminals, define as an international crime the “planning, preparation, initiation or waging of a war of aggression or a war in violation of international treaties, agreements or assurances”. Bolton appears to have “participated in a common plan” to prepare for the war (also defined by the principles as a crime) by inserting the false claim that Iraq was seeking to procure uranium from Niger into a state department factsheet. He also organised the sacking of José Bustani, the head of the Organisation for the Prohibition of Chemical Weapons, accusing him of bad management. Bustani had tried to broker a peaceful resolution of the dispute over Iraq’s alleged weapons of mass destruction.

Some of the most pungent criticisms of my feeble attempt to bring this man to justice have come from other writers for the Guardian. Michael White took a position of extraordinary generosity towards the instigators of the war. There are “arguments on both sides”, he contended on the Guardian politics blog. Bustani might have received compensation after his sacking by Bolton, “but Bolton says that does not mean much”. In fact, Bustani was not only compensated at his tribunal, he was completely exonerated of Bolton’s accusations and his employers were obliged to pay special damages.

White suggested that Iraq might indeed have been seeking uranium from Niger, on the grounds of a conversation he once had with an MI6 officer. Alongside the British government’s 45-minute claim, this must be the best-documented of all the false justifications for the war with Iraq. In 2002, the United States government sent three senior officials to Niger to investigate the claim. All reported that it was without foundation. The International Atomic Energy Agency discovered that it was based on crude forgeries. This assessment was confirmed by the state department’s official Greg Thielmann, who reported directly to John Bolton. No evidence beyond the forged documents has been provided by either the US or the UK governments to support their allegation.

White also gives credence to Bolton’s claims that the war in 2003 was justified by two UN resolutions – 678 and 687 – which were approved in 1990 and 1991, and that it was permitted by article 51 of the UN charter. The attempt to revive resolutions 678 and 687 was the last, desperate throw of the dice by the Blair government when all else had failed. When it became clear that it could not obtain a new UN resolution authorising force against Iraq, the government dusted down the old ones, which had been drafted in response to Saddam Hussein’s invasion of Kuwait.

This revival formed the basis of Lord Goldsmith’s published advice on March 17 2003. It was described as “risible” and “scrap[ing] the bottom of the legal barrel” by Lord Alexander, a senior law lord. After the first Gulf war, Colin Powell, General Sir Peter de la Billiere and John Major all stated that the UN’s resolutions permitted them only to expel the Iraqi army from Kuwait, and not to overthrow the Iraqi government. Lord Goldsmith himself, in the summer of 2002, advised Tony Blair that resolutions 678 and 687 could not be used to justify a new war with Iraq.

Article 51 of the UN charter is comprehensible to anyone but the lawyers employed by the Bush administration. States have a right to self-defence “if an armed attack occurs against” them, and then only until the UN security council can intervene. On what occasion did Iraq attack the United States? Is there any claim made by the Blair and Bush governments that Michael White is not prepared to believe?

Conor Foley, writing on Comment is free, suggested that my action “completely trivialises the serious case” against the Iraq war and claimed that I was seeking to “imprison … people because of their political opinions”, as if Bolton were simply a commentator on the war, and not an agent. Does he really believe that the former under-secretary did not “participate in a common plan” to initiate the war with Iraq? What other conceivable purpose might the state department’s misleading factsheet have served? And what more serious action can someone who is neither a law lord nor a legislator take? Bolton himself maintains that my attempt to bring him to justice reflects a “move towards lawlessness and fascism”. This is an interesting commentary on an attempt to uphold a law which arose from the prosecution of fascists.

But there is one charge I do accept: that my chances of success were very slight. Apart from the 300-pound gorillas, the main obstacle I faced was that although the crime of aggression, as defined by the Nuremberg principles, has been incorporated into the legislation of many countries, it has not been assimilated into the laws of England and Wales. This does not lessen the crime but it means that it cannot yet be tried here. This merely highlights another injustice: while the British state is prepared to punish petty misdemeanours with vindictive ferocity, it will not legislate against the greatest crime of all, lest it expose itself to prosecution.

But demonstration has two meanings. Non-violent direct action is both a protest and an exposition. It seeks to demonstrate truths which have been overlooked or forgotten. I sought to remind people that the greatest crime of the 21st century remains unprosecuted, and remains a great crime. If you have read this far, I have succeeded.

This entry was posted in RagBlog and tagged Dissent, War Crimes. Bookmark the permalink.