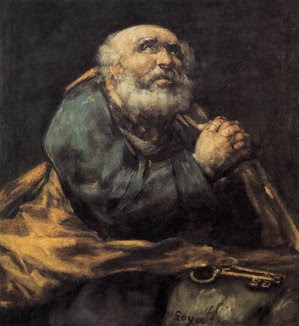 The arresting image of Treasury Secretary Paulson genuflecting before House Speaker Nancy Pelosi sent gasps and titters through the corridors of power in Washington. Strong leaders do now bow before rivals, especially a woman. This was a droll gesture–Paulson’s way of pleading with the Democratic leader not to blow up the bipartisan deal they had negotiated for the massive bailout of the financial system. “I didn’t know you were Catholic,” Pelosi responded in kind. It was not Democrats, she pointed out, but Paulson’s own Republicans who threatened to sink the grand rescue plan.

The incident reminded me what is missing in this financial storm–any hint of contrition. The spectacle I want to see is powerful and self-important leaders getting down on bended knee and asking the country’s forgiveness.

Henry Paulson could offer apologies for Wall Street and also for the Bush administration’s lackadaisical response to the spreading financial contagion. He is not alone.

The Republican party owes us an apology but so does the Democratic party, because both are directly implicated in creating the conditions that caused the disaster. So is the august Federal Reserve. It dismissed the early bonfires and actively encouraged the money fever that has led to ruin. So are deep ranks of learned economists. So are the corporate think tanks that blessed and promoted the financial gimmicks that made the country vulnerable to what is now unfolding.

That’s before we tick off the names of celebrated billionaires.

I would like to hear someone in authority say they are sorry. Instead, the political dance in both Washington and Wall Street is focused on holding hands in crisis and diverting blame elsewhere. Maybe it was those careless homeowners who didn’t read the fine print in their mortgages. Or sleepy regulators and the creepy lobbyists. Maybe it was the Chinese, who lent us too much money for own good. Maybe it was God punishing his most-favored nation for our sins.

Strong men are not supposed to say they are sorry. It would make them look weak. The public would be rattled to learn that their leaders are fallible. This might deepen the panic. If anyone in power confesses error, then people may no longer defer to their wisdom. The usual sycophants in media and academia are anxiously talking up the “wise men” in charge, urging citizens just to keep the faith.

I have news for “strong men” and their followers. What they do not realize is the country has already gotten way past that point. Trust has been destroyed by these events. People everywhere are both shaken and angered by what they see, then become more angry as they watch politicians and financial titans scramble to evade personal blame or institutional culpability. People may not understand the fine print, but they can tell when they are not being told the whole story.

This may sound premature, but the road to national recovery will require more than bailouts and other economic measures. We need a season or two of truth-telling in high places. The country has been taken for a rough ride and it’s not over. But it can help people to come to terms and help politicians make wiser decisions if the political dialogue takes a radical shift toward honesty. The problem, of course, is nobody wants to go first, especially during a presidential election.

In the current political stew, John McCain and his retrograde managers are trying to create the notion that he is the “white hat” protecting Americans from this horrendous bailout. That’s nonsense and I doubt people will swallow it. On the other hand, Democratic leaders in Congress are standing arm-in-arm with Paulson and other masters of the universe pushing the Wall Street bailout. They pretend to an innocent aura they do not deserve. The brain-dead lame duck president doesn’t count either. Nobody listening; nobody will believe anything he has to say.

This leaves Barack Obama as the one political leader with clean hands and the ability to speak clearly and honestly about how this all happened, how we can repair it. Maybe he can express a blanket apology to the American people on behalf of government and Wall Street, then demonstrate that as president he intends to extract an honest reckoning from all of them.

Here is my fantasy for today: some public-spirited group will create a “reconciliation commission” to encourage an airing out of public confessions and apologies. It would function roughly like the healing processes in countries like South Africa, where people could come forward to admit old crimes. The hearings would not absolve anyone of punishable crimes. But they could help the country and its political institutions come clean. Put the truth before us so everyone can think more clearly about what therapeutic reforms are needed.

Confession is good for sinners, we are told. Forgiveness helps to cleanse and heal old wounds if the confessions are honestly given. To get back our bearings as a nation, we will need lots of both, I predict (and I’m not even Catholic).

[The Nation’s National affairs correspondent William Greider has been a political journalist for more than thirty-five years. A former Rolling Stone and Washington Post editor, he is the author of the national bestsellers One World, Ready or Not, Secrets of the Temple, Who Will Tell The People, The Soul of Capitalism (Simon & Schuster) and–due out in February from Rodale–Come Home, America.]