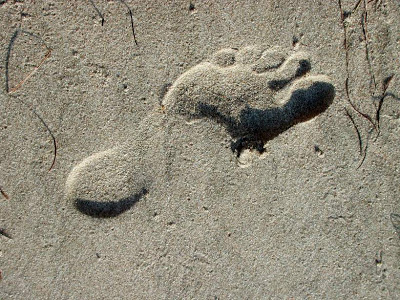 Ecological footprint. Image from Sprayblog.
Escalation in Afghanistan:
What’s the carbon/health footprint of another senseless war?

The Afghan War may now doom our ability both to cope with the global climate crisis and to fairly deliver health care in this country.

If Barack Obama announces an escalation, Copenhagen and the Climate Bill will become meaningless. And the prospects for a single-payer health care system or even a token public option will disappear.

At 11 p.m. Tuesday, December 1 — after Obama’s speech — we in central Ohio will gather at the Federal Building to either celebrate Obama’s courageous decision against escalation, or to inaugurate what will certainly be hard years of bitter civil struggle against yet another senseless war. Texans for Peace, Freepress.org, Solartopia.org, and other peace, green and social justice organizations ask others around the world to consider joining us in your own home towns.

If there is no escalation, we can celebrate a small step forward in Copenhagen, where Obama has said he will join with Chinese leadership in a 17% reduction in carbon emissions. Joining with the Chinese in setting ANY target is good global politics.

But this is nowhere near enough. Nor is it anywhere near what’s possible.

The rapid advance of renewable and efficient technologies is forcing nuclear power and fossil fuels out of the marketplace. In one of humankind’s great technological revolutions, a future that is carbon/nuclear free has become tangible and doable.

Such a Solartopian conversion is the surest route to economic security and a full employment economy… and to peace.

But if Obama escalates, in a nation with at least one foot already deep in bankruptcy, the resources for that conversion will disappear. In a toxic, polarized wartime atmosphere, the Climate Bill could well degenerate into a cynical faux green smokescreen for a relapse to the failed experiment with atomic reactors.

The war would also come with a carbon burst. How will the massive emissions created by 100,000-plus soldiers in wartime be counted in the 17% reduction rubric? Will the HumVees be converted to hybrids? What is the carbon impact of Predator bombs that destroy Afghan families and villages?

Likewise the war will create yet another wave of human casualties to strain a health care system already at the breaking point. The $1 million a year estimate for every solider sent to Afghanistan does not begin to cover the additional fortunes spent to try — so often unsuccessfully — to make these good people whole again when they return.

The $2 or $3 trillion an escalated war is likely to cost could more than fund a single-payer system to cover every American citizen. Escalation turns that money into bombs and bullets that kill rather than heal.

It is the business of war, however it’s packaged, to destroy land and people.

We saw what the Vietnam War did to the dream of a Great Society. The poisons spread by an escalated Afghan war would take decades to heal. It would signal a nation firmly in the death grip of corporations and the military.

The certainties are few but staggering:

As with every foreign conqueror since Alexander the Great, the American presence in the Graveyard of Great Powers will fail.

Sending more troops is an escalation, whether packaged with an “exit strategy” or not; intentions to leave nearly always fail to materialize and entrenched troops rarely leave.

U.S. escalation there will make us more, not less, vulnerable to terrorism.

The money to pay for this war could otherwise fund the transition to a carbon/nuke free economy, and to a truly workable national health care system.

But the United States does not have the human, political or financial resources to wage this war while also solving the climate and health crisis.

We cannot lose track of our goals — peace, a planet to live on, social justice, freedom and the promise of what’s beyond. We will not surrender that vision to hard times.

So we’ll gather Tuesday night. Let’s hope we have something to celebrate. We already know what we have to fight for.

Go to Texans for Peace for the latest information about Texas actions protesting the Afghanistan escalation.