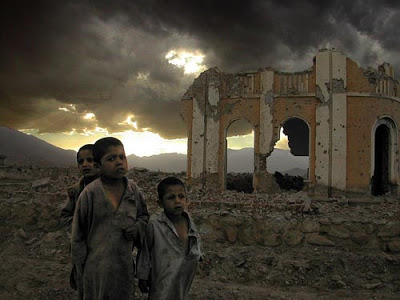 War scene at the time of then Presidential candidate Barack Obama’s July 28, 2008, visit to Afghanistan.

President Barack Obama is refusing to be rushed into his first decision to send troops into combat, an early sign he may be more independent-minded than U.S. military leaders expected.
[…]
Rather than sign off quickly on all or part of a long-standing Pentagon request for three Army combat brigades and Marine units, totaling over 10,000 troops, Obama and his aides are questioning the timetable, the mission and even the composition of the new forces, officials familiar with the deliberations said.

‘If the mission is containment of the hive of villainy in the borderlands to its caves, that’s fine in the short term but, as Colin Powell would say, we need an exit strategy. That strategy needs more focus on nuclear Pakistan than Stone Age Afghanistan.’

What a novel concept!

I’m not opposed to sending troops and barring a complete pullout — which would be really dumb at this moment in time — we need to send SOME troops.

The question is the mission and de debil is in dose details.

If the mission is “a democractic and peaceful Afghanistan” or some such crap, we are well and truly fucked.

If the mission is containment of the hive of villainy in the borderlands to its caves, that’s fine in the short term but, as Colin Powell would say, we need an exit strategy. That strategy needs more focus on nuclear Pakistan than Stone Age Afghanistan. The internal politics of Pakistan really drive what is going to happen.

We are overdue in resolving the Kissinger “tilt” in favor of Pakistan in the Pakistan-India disagreements dating from the Nixon years. The only way I can explain no major hoo-hah in the US when we took the side of a military dictatorship against a democracy because that democracy was not on board with our Cold War moves was that Nixon was into so much bad stuff elsewhere nobody noticed. Well, now let’s see where that “tilt” got us.

Is India a problem? Well, they want to compete for our tech jobs. But it’s Pakistan that is willing to sell nukes to North Korea.

Haven’t we been clever? Thanks again, Dr. K!

President Barack Obama is refusing to be rushed into his first decision to send troops into combat, an early sign he may be more independent-minded than U.S. military leaders expected.

The new president’s methodical decision-making offers an early insight into how the new commander in chief will approach the war in Afghanistan and has surprised some Pentagon officials, who had predicted repeatedly in the past two weeks that Obama would decide within days on additional forces, only to find the White House taking more time.

Rather than sign off quickly on all or part of a long-standing Pentagon request for three Army combat brigades and Marine units, totaling over 10,000 troops, Obama and his aides are questioning the timetable, the mission and even the composition of the new forces, officials familiar with the deliberations said.

The latest sign of crossed signals occurred Friday, when White House spokesman Robert Gibbs told reporters Obama “hasn’t made a decision on augmenting our force structure in Afghanistan,” three days after Pentagon officials said he would likely do so that week. Defense Secretary Robert Gates called Obama’s deliberate approach on his first troop decision “entirely appropriate.”
Gibbs said Monday he expects Obama to decide “shortly” on sending more troops to Afghanistan but declined to be pinned down on exactly when.

Obama’s deliberate pace represents yet another break with the usual style of his predecessor. Former President George W. Bush usually signed off quickly on requests for additional troops from his commanders, and, especially early in his presidency, he rarely engaged in lengthy discussions about what the troops would be used for. Those decisions were generally worked out ahead of time between field commanders and Defense Secretary Donald Rumsfeld, who favored holding down troop levels in both Iraq and Afghanistan.

The major exception to this approach was when Bush got directly involved in pressing his reluctant commanders for the “surge” — the decision to send nearly 30,000 additional troops to Iraq in late 2006 and early 2007.

At least in the early weeks of his presidency, Obama in some ways resembles the Bush of late 2006 as he considers his own mini-surge to reverse the worsening situation in Afghanistan and appears to be immersing himself in the details of the policy shift.

“I’m personally hopeful that President Obama will do something that President Bush didn’t do particularly well,” said John Nagl, president of the Center for a New American Security and a retired Army officer. “I think he’s thinking through the implications of committing troops, not just the first order but the second and third order effects.”

The request for additional forces from Gen. David McKiernan, the senior commander in Afghanistan, came before the administration has completed a review of Afghanistan strategy that is likely to make far-reaching changes in how U.S. and NATO forces are being deployed.

As a result, officials said, though the troop decision was once seen as an almost routine matter, Obama’s discussions with Gates and Adm. Mike Mullen, the chairman of the Joint Chiefs of Staff, has evolved into a broader discussion about goals and methods in Afghanistan, even before the conclusion of the review.

The delay in deciding reflects at least in part Obama’s determination not to be rushed by the Pentagon brass into a decision before he fully understands the implications, several officials said.

The slow pace also is an indication of the influence being exerted by Gates, who has warned repeatedly in recent weeks about rushing into a greater U.S. commitment in Afghanistan without carefully weighing the risks. The Pentagon has asked McKiernan for a study that would examine the risks of sending additional troops to a part of the world that has a long history of resisting the presence of foreign forces.

McKiernan has sought at least some of the additional forces in time for them to be on the ground ahead of expected spring fighting. But the White House appears more concerned with getting troops in place ahead of the Afghan presidential elections, now scheduled for August, an official said.

The White House’s longer timetable is likely an indication of its intention to shift the military strategy over the coming year.
Instead of using U.S. forces primarily to kill and capture insurgents, the strategy review is likely to recommend placing more emphasis on protecting the Afghan population, several officials said. In that case, getting McKiernan the troops by spring is not the primary concern, an official said.

Obama also faces a decision on whether to shift forces equipped with Stryker vehicles, an armored troop carrier, from Iraq to Afghanistan. Commanders in Iraq particularly value the Stryker units, which can move quickly and with greater protection from roadside bombs than conventional convoys using Humvees.

But with the security situation worsening in Afghanistan, commanders there are also seeking vehicles with greater protection that can also move forces around the vast country more quickly.

The Stryker decision illustrates the real tradeoffs that Obama is facing early in his presidency as he juggles his campaign vow to shift resources to Afghanistan with the need to protect the security gains achieved in Iraq.

The White House is also exploring whether at least one of the three requested brigades should be designated to train the Afghan Army, rather than used primarily in combat operations, the official added. Shifting the unit’s mission would require additional training that could delay the date when the unit could arrive in Afghanistan, an official said.

The U.S. Army is currently supplying only around 1,000 advisers to the Afghan National Army, around 2,000 short of the necessary number, according to Anthony Cordesman, military analyst with the Center for Strategic and International Studies, a Washington think tank. The administration is hopeful that NATO allies will contribute more personnel to assist in training Afghan security forces, especially the police.

There are currently 33,000 U.S. troops in Afghanistan, including 15,000 under NATO command and another 18,000 under exclusive U.S. command involved in fighting insurgents and training Afghan forces. Another roughly 30,000 troops are in the country from NATO allies.

Obama appears likely to approve one or two additional brigades, totaling between 3,500 and 9,000 soldiers and put off a decision on the third brigade until later. But he has been given multiple options, officials said, including sending no additional forces now or approving all three of the requested brigades and Marine units, the last of which would not arrive in Afghanistan until next year. The Pentagon is also shifting additional helicopters and other assets to Afghanistan as part of the ramping-up of capabilities there.

Even if all three brigades are sent now, that would still only total less than half of the 30,000 additional troops that U.S. commanders once said they needed in the country. Gates said last week that he would be reluctant to recommend sending more forces beyond those now under consideration.