Afghanistan: Not Winning Hearts and Minds 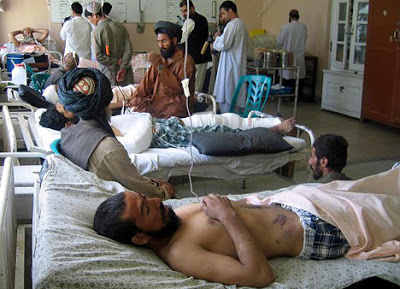 Wounded Afghans recover after air strike bombings.
Losing the People: The Cost and Consequences of Civilian Suffering in Afghanistan
By Erica Gaston / February 26, 2009

For the last year, I have been living in Afghanistan interviewing civilians harmed in the conflict for the Campaign for Innocent Victims in Conflict (CIVIC). We spoke with 143 survivors of airstrikes, suicide bombings, IEDs, convoy shootings, and other incidents of war. What they told me, as well as what more than 80 military, governmental and humanitarian actors I spoke with said, became the basis for a new report we released last week:

Losing the People: The Cost and Consequences of Civilian Suffering in Afghanistan

The United Nations Assistance Mission in Afghanistan recently released figures estimating an almost 40% increase in the number of civilian deaths in 2008. CIVIC’s report builds on statistics like this by being the first report to look closely at civilian harm, efforts to provide help from the warring parties, how civilians feel and how these critical efforts can be improved.

While a troop surge for Afghanistan is being strategized, recent poll numbers indicate that the Afghan public’s support for the United States, and for more international troops in Afghanistan, is at an all time low. Having spoken to those families who directly bear the costs of the ongoing conflict, it’s no wonder why. Families repeatedly told me their grief at losing a loved one, at suffering a disability, at losing their homes, or being uprooted from their communities by conflict – and their anger that they saw no recognition or concern from those international troops whom they blamed for these losses. I spoke with one man who watched 47 of his neighbors and extended family killed in a US airstrike in July 2008. He was angered at the lack of basic respect demonstrated by the US military, who denied the loss of life. “In our culture if something happens to someone – they are killed, their property is destroyed – you come and apologize.”

From Kandahar to Herat, from refugee camp tents to bullet-pocked living rooms, affected families told me over and over how the incident shattered their lives, their communities, and not just in the immediate aftermath but for years to come. They needed help to get back on their feet, they wanted an apology, and they wanted it from those they held responsible – the international community.

Sadly, those that actually received compensation or other help were the minority. Far more often, civilians said they were only given promises of assistance, or that the assistance they received was too little, too late.

Providing compensation and basic respect and recognition to families who have lost a loved one, been injured, or lost a home, is only one piece of the challenge in Afghanistan of course. But in the eyes of the Afghan public it is at the core of their concerns. Billions are spent to win and rebuild Afghanistan particularly by the United States. But it only takes seeing one family ignored to turn the population against the United States and international forces. A 15-year old boy who lost his sister in the same July 2008 airstrike told me: “I feel bad and angry when I see international soldiers. I thought that they were coming to help and bring peace but they aren’t paying attention to civilians.”

To get it right in Afghanistan, we need to do a better job of listening to what Afghans say they need and want. Let’s start with being more responsive to one of their simplest requests: limit civilian harm, show basic respect and dignity where harm does occur, and help out those families who will pay the real, human costs of the newly proposed troop surge.

This entry was posted in RagBlog and tagged Afghanistan, Civilian Fatalities, U.S. Military, War on Terror. Bookmark the permalink.

2 Responses to Afghanistan: Not Winning Hearts and Minds