Afghanistan : The Slaughter of Innocents Is an American Policy 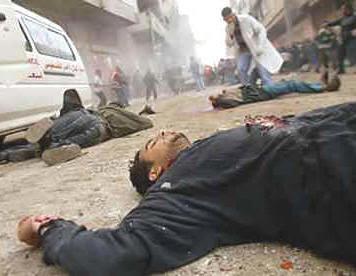 The “necessary war” in Afghanistan, which both presidential candidates support — the one, you know, that’s really about terrorists and Osama and all — raises as many troubling questions about who we are as the other war we’re fighting and losing.

Consider the details of this war. The aggregate civilian death toll, at the hands of the U.S. and NATO — between 6,800 and more than 8,000, according to economics professor Marc Herold of the University of New Hampshire — is a start. But Herold’s about-to-be-released report on the bombing campaign in Afghanistan, “The Matrix of Death,” is a disturbing analysis not only of the collateral damage churned up by our terrorist-hunt in this broken nation, but of the attitude and rationality that are driving it. The report is subtitled: “The (Under)Valuation of an Afghan Life.”

This is a report on the flawed premise from which ultimate failure flows — the flawed premise that keeps hell active and guarantees an endless supply of enemies. And the more of these “enemies,” and their children, that we kill, the less safe we are, and we know this, so we lie about the numbers of dead. Most of all we lie about what we are, in fact, doing, which is fighting an irrational war, most accurately called the war to promote terror. We will not win it unless we revert to the morality of Ancient Rome: “create a wasteland and call it peace.” But that’s not winning, either.

What it is, indeed, is racism, especially the use of what is called close air support: In order to protect the lives of American and NATO (mostly white) troops, we do much of our fighting from the air, with 500- and 2,000-pound bombs, lacerating a (non-white) Afghan population we don’t even have to face.

Herold quotes John MacLachlen Gray in the U.K. Globe and Mail: “. . . the slaughter of innocent people, as a statistical eventuality is not an accident but a priority — in which Afghan civilian casualties are substituted for American military casualties.” Herold adds: “What I am saying is that when the ‘other’ is non-white, the scale of violence used by the U.S. government to achieve its stated objectives at minimum cost knows no limits.”

This is a description of U.S. policy stripped of the pretense in which it is usually cloaked. Not only are the numbers of dead downplayed significantly in official military statements and the sympathetic (mainstream) media, but those civilian dead who are acknowledged are instantly rendered “regrettable, but not our fault” by the circular, all-purpose justification that they were not deliberately targeted.

When you bomb a village, the dead are random and anonymous — and therefore, thanks to some legalistic moral loophole, no one’s fault. And this is one of the military advantages of air war, as far as I can tell. However horrific the results it produces on the ground — “I saw pieces of bodies scattered around . . . I couldn’t even make out which part was which . . . it was just flesh everywhere” — the perpetrators maintain an easy moral purity that forestalls self-doubt and revulsion.

And, as Herold writes: “The recent increasing reliance upon unmanned drones to dispense death and destruction in the border regions is in a sense the penultimate disconnect between killing them and saving ours.”

To put this all another way, the simple math of conventional national security — the zero-sum game of kill or be killed, our lives matter and theirs don’t — is terrifyingly counterproductive in the 21st century. It always has been, of course, but we used to be protected from its consequences by distance and ignorance. Humanity is connected now like never before, and possesses the technology of self-annihilation. Such technology cannot be contained, and thus true security has nothing to do with national borders. We cannot afford to devalue any portion of the human race.

For that reason, the most disturbing part of Herold’s report may have been his discussion of the “condolence” money paid, occasionally, to the survivors of Afghan civilians killed by our actions. These payouts have ranged from as low as $400 per dead civilian to several thousand dollars.

Herold puts this into perspective: “Approximately $80,000 was spent on the rehabilitation of every sea otter affected by the Exxon Valdez oil spill, that is, ten times the condolence amount offered by the U.S. military to the family of an Afghan killed.”

This does not make me feel safe. I can’t even fathom the values that are operating here, even though they are stamped: “U.S.A.” We are already reaping what the Bush legacy has sown, but there’s a lot more that awaits us, and we have no right to be surprised when it comes.

Robert Koehler, an award-winning, Chicago-based journalist, is an editor at Tribune Media Services and nationally syndicated writer. You can respond to this column at bkoehler@tribune.com.

This entry was posted in RagBlog and tagged Afghanistan, War, War on Terror. Bookmark the permalink.