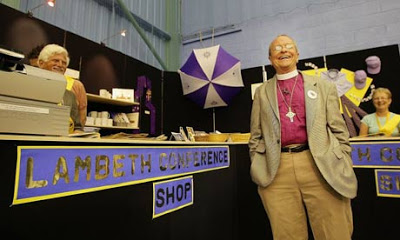 Rev. Gene Robinson touring stalls at Lambeth. He is not invited to the conference itself. Photo by Peter Macdiarmid / Getty Images.
‘Should resign for good of the church…’
By Riazat Butt / July 22, 2008

Rev. Gene Robinson, the gay bishop of New Hampshire should resign in order to save the Anglican Communion, a senior African archbishop said today.

The call came from the Rt Rev Dr Daniel Deng, the archbishop of Sudan, and followed a strongly worded statement that accused the US Episcopal church of exposing Anglicans to ridicule and damaging their credibility in a multi-religious environment.

African bishops who signed the statement rejecting homosexual practice said they could not accept it as part of their church. They reiterated their opposition to developments in the US and Canada, where gay clergy are ordained and where same-sex relationships are blessed.

“This has not only caused deep divisions within the communion but it has seriously harmed the church’s witness in Africa, opening the church to ridicule and damaging its credibility in a multi-religious environment.”

The statement was endorsed by more than 150 bishops attending Lambeth, who represent 17 of the 38 provinces in the Anglican Communion.

Deng said: “He [Robinson] should resign for the sake of the church. The people who consecrated him should confess to the conference because they created an outcry in the whole Anglican world. God is not making a mistake creating Adam and Eve – he would have created two Adams if he wanted. If he was a real Christian he would resign.”

There was already a breakdown in the Anglican Communion, with around 230 bishops boycotting the conference because of Robinson’s election, he said.

“Can he not resign to allow the 300 bishops to come back to the house? The norms of the communion have been violated. We’re asking them as Christians to keep the Anglican world intact.”

Robinson’s election divided the communion and his exclusion was intended to appease traditionalists. However, the decision of Rowan Williams, the Archbishop of Canterbury, to keep Robinson away angered the Episcopal church, which until 48 hours ago was lobbying to have him brought back into the fold.

US bishops expressed their anger and hurt over his exclusion at a closed meeting. However, the leadership declined to take up the issue and an increasing number of bishops are said to be distancing themselves from the New Hampshire cleric in order to avoid conflict with conference organisers.

Officially, today was the second day of the most important gathering in the Anglican calendar. But the crucial summit is descending into farce, with bishops publicising their disputes and grievances. Robinson complained at being shut out, not only from Lambeth but also from a key US House of Bishops meeting.

On his blog, he wrote: “It really puts all of us in a lose-lose position: if I abide by their ruling, I am excluded; if I fight it or simply show up, then I’m the troublemaker and rebel. This is not a ditch I feel called to die in. I will just mourn the sadness of it, and move on.”