After Copenhagen : Lighting a Candle for Climate Change 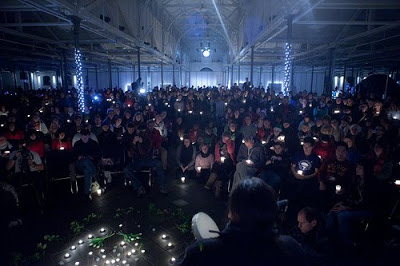 Hundreds of climate activists gathered in Copenhagen December 17, in a candlelight vigil. Photo from tcktcktck.org.
After Copenhagen:
Vigils shine a light on emerging movement

I am writing from the midst of a great winter storm. It is at moments like this that it is hard to convince our kishkes, our innards, that global “warming” is dangerous. That’s one of the reasons I insist on talking about “global scorching” — more honest to the geological reality and more evocative of the emotional reality.

Copenhagen is over: At the official leadership level, it was a dismal failure. At the grassroots level, it brought another stage of growth.

Which narrative controls the future — top-down failure or grassroots growth — depends on us.

What went wrong in Copenhagen? The officials came up with a vague agreement among five major nations, no binding decisions, a too slowly approached process toward a too-limited target for even the non-binding decisions, anger among many other nations about both being ignored in the process and short-changed in the results, and a very tentative possible success in beginning the creation of a world fund to aid poor nations make the shift into non-fossil economic development.

Four major culprits: Big Oil and Big Coal, which have blocked effective action by the U.S.; the U.S. government (President and Congress), which has kowtowed to them and failed to commit a serious level of money to meet the needs of poor nations; and the Chinese government, which rejected effective outside verification of its promised cuts in CO2 emissions.

Pressure for deeper commitment, coming from African and Latin American nations and small countries most vulnerable to global scorching through drought and flood, fell short because they had too little power to force the rich and large nations to meet the world’s needs.

On the streets in Copenhagen and around the world, however, the summit sparked much more action and much more coherent connection. A true transnational movement is emerging, as will have to happen if the human race is to prevent utter disaster.

In the U.S., attention now turns to the Senate where debate continues on the Kerry-Baker cap-and-trade climate bill and the pressures to water it down. Perhaps most crucial: Will the bill allow the Environmental Protection Administration to establish strong regulations on emitting CO2? If the Senate strips EPA of that power, as some senators are trying to do, it will be better to defeat the bill and get EPA to act.

There will have to be many more people going beyond their own households to address public policy, with much greater effort from those people. In the U.S. especially, climate activists will have to make much closer alliances with health-care, anti-war, and pro-jobs activists if climate healing is to prevail.

One example of grassroots energy that brought together people of different religions and generations: Last Saturday night (12/12), was both the second night of Hanukkah and the night 350.org, a transnational climate-activist network, had urged worldwide candle-lighting vigils to impact Copenhagen.

Around the world, there were more than 3,000 such vigils. Tens of thousands of people gathered in the bitterly cold streets of Copenhagen in night after night of nonviolent demonstrations.

In Philadelphia that evening, about 60 people from various Jewish congregations, some interfaith environmental groups, the local climate-crisis 350.org, and the Philadelphia (high school] Student Union gathered at Independence Hall to light Hanukkah menorahs and other candles as a message to Copenhagen to get serious about a fair, strong, and binding agreement to stop the worsening of the climate crisis.

1 Response to After Copenhagen : Lighting a Candle for Climate Change