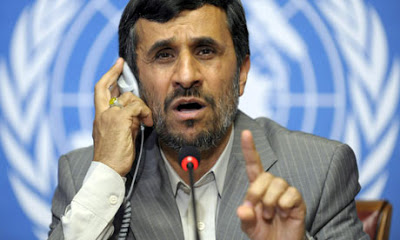 Iranian president Mahmoud Ahmadinejad during press conference at the European headquarters of the UN in Geneva, Switzerland. Photo by Laurent Gillieronv / EPA.

I hope in time to respond in detail to Nima Shirazi’s discussion of Iranian President Mahmoud Ahmadinejad’s provocative speech at Durbin II. But, for now, here is a very different take from Terraviva Europe, the European Edition of the IPS Daily Journal. As the article shows, those of us who oppose Israeli policies and rightwing Zionist ideology would do well to avoid the kind of hateful rhetoric that Ahmadinejad employs.

‘The attack by the Iranian President, who had previously called for the destruction of Israel, was inauspiciously timed — just as Israelis Monday evening began marking one of the most solemn days on their national calendar — Holocaust Memorial Day.’

JERUSALEM — Just when it seemed that the international community was gearing itself up to put pressure on the new Israel government to engage the Arab world and the Palestinian Authority seriously on peace, Iran’s president hijacked the moment. But, in again lashing out against Israel, he handed the Israeli prime minister a whip of his own with which to question the merit of dialogue with Iran which the Obama Administration has been promoting.

Only last week, in his latest round of talks with Israeli and Arab leaders, special U.S. presidential envoy Senator George Mitchell had suggested a linkage between solving the issue of Iran’s nuclear quest and the need for Israel to remain committed to a two-state solution with the Palestinians. To which Israeli Prime Minister Benjamin Netanyahu had responded with a linkage of his own – a negative linkage: that renewal of negotiations with the Palestinians be conditional on removal of the Iranian nuclear threat.

Enter Iranian President Mahmoud Ahmadinejad into the prestigious halls of the UN Conference on Racism in Geneva armed with his denunciation of the West and an accusation that Europe and the U.S. had dispossessed the Palestinians. “They resorted to making an entire nation homeless on the pretext of Jewish suffering…in compensation for the dire consequences of racism in Europe, they helped bring to power the most cruel and repressive, racist regime in Palestine.”

That attack by the Iranian President, who had previously called for the destruction of Israel, was inauspiciously timed — just as Israelis Monday evening began marking one of the most solemn days on their national calendar — Holocaust Memorial Day.

That handed Netanyahu a comfortable platform on which to launch a counter broadside. “Only a few decades after the Holocaust, new forces have arisen, declaring their intention to wipe the Jewish state off the face of the earth,” declared the Israeli leader. “Holocaust deniers cannot commit another holocaust. This is the State of Israel’s supreme obligation. This is my supreme obligation as prime minister.”

Ten days ago the Tel Aviv daily Maariv reported that Netanyahu had been briefed on the Israeli military’s planning with regard to the Iranian question, the paper reporting the prime minister “happy” with what he had heard. Then over the weekend, the London Times claimed that the Israeli Air Force was “training for an attack on Iran on very short notice.” According to Amos Harel, a leading Israeli strategic affairs analyst, “the timing of these reports is not coincidental – Israel is trying to make clear that, even though the U.S. plans to begin a diplomatic dialogue with Iran, Israel holds a realistic military option.”

Timing is all – especially poor timing. The Ahmadinejad rhetoric is enabling the hard line Israeli leader to mould a national consensus not only around policy directions towards Iran, but in his policy directions towards the Palestinians. When he came up against Senator Mitchell’s insistence that he commit publicly to the two-state principle, Netanyahu’s response was resolute: before we can admit to the creation of a Palestinian state, first let the Palestinians recognise Israel as a Jewish state. That too resonates with the Israeli public.

Mitchell, however, was not impressed. Since his meeting last Thursday with Netanyahu, U.S. State Department officials have repeatedly made plain that, in the U.S. view, talks between Israelis and Palestinians should resume as soon as possible “and, with no pre-conditions.” In his Friday meeting with the Palestinian leadership in Ramallah, Mitchell intimated strongly that he means to leave Netanyahu no room for manoeuvre: “the two-state solution is the only solution,” he said adamantly. “Comprehensive peace in the region is,” he added “in the national interest of the United States” as well as in the Palestinian and Israeli interests.

President Ahmadinejad’s bluntness could now prove the saving grace for a recalcitrant Netanyahu and a real blow for the Obama strategy-in-the- making. In fact, he seems to have put the U.S. President initiative in a double-barrelled bind: the State Department had to condemn the Ahmadinejad statements in Geneva at the very time it was reaffirming the U.S. commitment for dialogue with Iran.

More pointedly, Mitchell’s attempt to link forceful progress towards resolution of the Israeli-Palestinian conflict, as well as the overall Israeli- Arab conflict, with a firm policy that will curb Iran’s nuclear ambitions could well be seriously hamstrung. The Iranian President may even have given renewed life to the counter Israeli insistence that before the world should expect Israel to move on Palestine, it must first deal convincingly with Iran.