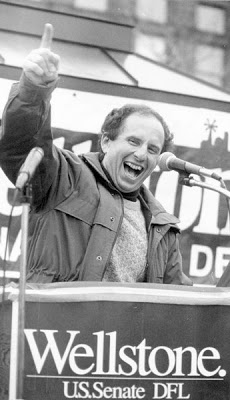 Wellstone was pulling ahead in the polls, and the victory of a man who voted against the war resolution would have been a great embarrassment to the Bush administration. This was a convenient death.

It is likely that Al Franken could be named this week as the winner of the disputed Senatorial election in Minnesota. He would be taking the seat of Paul Wellstone, one of the great progressives of our time. We remember his skill at filibustering legislation designed to pick our pockets, and hope Franken develops a similar skill.

Paul Wellstone, a two-term United States Democratic Senator from Minnesota was killed in a plane crash on Oct. 25, 2002, in Eveleth, Minn., two miles away from the Eveleth-Virginia airport. The plane had departed St. Paul. His wife Sheila and Marcia, their daughter, three staffers, and two pilots were also killed. He was aboard what is called a business turboprop — King Air A100. It was known for its safety.

He was locked in a very tight race for reelection. He was taking the then very unpopular position that invading Iraq would be a mistake, but his chances for reelection were reasonably good. Some say he was the only genuine progressive in the Senate. This writer would make that circle a little wider.

That Minnesota race was very important because the Senate was almost evenly divided and very close to falling under Republican control. Wellstone was pulling ahead in the polls, and the victory of a man who voted against the war resolution would have been a great embarrassment to the Bush administration. This was a convenient death.

The Wellstone plane was operated by two experienced pilots. It was said that visibility was poor. But it was possible to see for 2½ miles. When the plane came under the lowest cloud layer at 700 feet, the airport would have been in view. On CNN, the anchor kept talking about ice on the plane’s wings while the on-scene reporter repeatedly said it was not quite cold enough for that condition. However at the 9-11,000 feet level there would have been some icing. Another pilot landed a slightly larger aircraft there a few hours later and said he encountered light icing at 10,000 feet but that it was not a problem. A National Center for Atmospheric Research scientist discounted the icing theory. At any rate, the plane was equipped with deicing equipment, and people used to flying in Minnesota would have used it routinely. A “black box” was never found and the National Transportation Safety Board claimed there probably was none aboard the plane. However, planes of that type were required to carry them.

Plane crashes are a very good way to eliminate people. There is little evidence and few or no witnesses. They are investigated by government employees, who are subjected to all sorts of pressures. One of the two pilots was very highly rated and had a great deal of experience, and the other was well qualified. If pilot error seems unlikely, we must look for another cause. It seems they lost the ability to control the craft, and it then crashed. At the time the plane dove and lost communications, a man nearby, driving to a funeral, experienced severe cell phone problems. He heard “between a roar and loud humming voice…oscillating…screeching and humming noise.” For hours after the crash there was blue smoke coming out of the plane’s fuselage, suggesting an electrical fire.

We know that the US has microwave weapons to knock out enemy weapons systems, and some have hypothesized that they were used here. There is no solid evidence to prove this.

FBI personnel arrived at the scene with extraordinary speed — one hour after the crash. Arriving at 11 a.m., they would have to have departed St. Paul at the same time the plane took off. Did they know in advance? An airport employee insisted they came from Minneapolis/St. Paul, but the FBI later insisted the agents came from Duluth, explaining their early arrival. On the other hand, their badges would have permitted them to travel at any speed they desired. They made it difficult for fire teams and AP photographers to take photos. Gary Ulman, the airport manager, said he did not call the FBI. (As soon as the plane broke radio contact, he took off in his own plane to look for it.)

If one studies the subject some, it seems that politicians have a greater chance of dying in air crashes than others. But this could be because they use small craft. A study done after the crash suggested that Democrats are almost twice as likely as Republicans to go down in air crashes. It also appears that Democrats and liberal Republicans have worse luck with airplanes than others. Some might recall that Democratic Senators Tom Daschle and Patrick Leahy were targeted with anthrax letters. Still, lacking proof that there was skullduggery, we should probably bow to the conventional wisdom that it was an accident. The fact that this writer and others feel the necessity to raise the subject, speaks volumes about the Age of the Second Bush.

Also see Why Al Franken should NOT be riding private planes by Bob Fitrakis and Harvey Wasserman / OpEd News / Jan. 5, 2008.