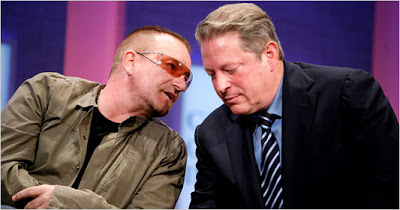 Al Gore, the former vice president and winner of the Nobel Peace Prize, is nothing if not passionate on the issue of global warming. But his usual fired-up remarks on the subject took a step into the Gandhian realm on Wednesday when he told an audience at the Clinton Global Initiative meeting in New York that the crisis was so severe and intractable that it was time for direct action.

“If you’re a young person looking at the future of this planet and looking at what is being done right now, and not done, I believe we have reached the stage where it is time for civil disobedience to prevent the construction of new coal plants that do not have carbon capture and sequestration,” he said at the third annual meeting of former President Bill Clinton’s initiative, which arranges partnerships between the very rich and the very needy.

Mr. Gore said the civil disobedience should focus on “stopping the construction of new coal plants,” which he said would add tons of carbon dioxide to the atmosphere — despite “half a billion dollars’ worth of advertising by the coal and gas industry” claiming otherwise. He added, “Clean coal does not exist.”

The audience at the Sheraton New York Hotel and Towers, which was composed of hundreds of heads of state and chief executives, as well as representatives of philanthropic groups, reacted with scattered applause. There was a lot of shifting in seats.

Mr. Gore did not elaborate on his call for action. And almost as soon as the words “civil disobedience” were out of his mouth, Mr. Clinton, moderating a panel that Mr. Gore shared with the singer Bono, the president of Liberia, the chairman of Coca-Cola and Queen Rania of Jordan, turned to the queen to ask whether Middle Eastern countries might ever become “models of clean energy usage.” The discussion continued in a less-fiery vein from there.