Alan Waldman: ‘Are You Being Served?’ Was Hit Sitcom in Britain and Around the World 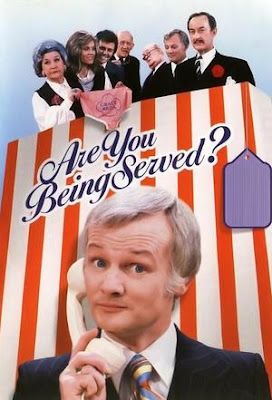 It — and sequel ‘Grace and Favour’ — aired 81 classic episodes, which repeated and repeated on many PBS stations.

Are You Being Served? is a beloved Britcom that aired 69 silly and naughty but highly amusing episodes from 1972 to 1985. It dealt with the antics and misadventures of the staff of the men’s and women’s clothing floor in fictional Grace Bros. department store in London.

It was created and totally written by executive producers David Croft (won two BAFTAS and earned 13 BAFTA noms for this, ‘All ‘Allo!, Dad’s Army, and other series and who won the British Comedy Awards’ Lifetime Achievement honor) and Jeremy Lloyd (same BAFTAs and got two Emmy noms for writing on Rowan and Martin’s Laugh-In. Lloyd started his career as a suit salesman at Simpson’s Department Store.

Later episodes drew enormous British audiences — up to 22 million (in a country of 50 million, at that time). It took the 1977 “Best Sitcom” BAFTA.

All episodes are available on DVD and Netflix, with many episodes, such as this gem, available for free on YouTube.

From 1992 through 1993, the brilliant cast returned as the same characters running a country manor/hotel for 12 episodes of Grace & Favour (called Are You Being Served? Again! in some countries).

The cast was impeccable and their comic timing was superb. Molly Sugden played Mrs. Betty Slocombe, who drank, was man-hungry, and constantly changed her bright hair color. Gap-toothed Jon Inman was Mr. Wilberforce Humphries, a very effeminate men’s department head who lived with his mother. Frank Thornton (who went on to star in Last of the Summer Wine, Britain’s longest running sitcom) created Captain Stephen Peacock, a haughty floorwalker who claims to have fought in the British North Africa campaign, but who actually worked with food and never saw combat.

Wendy Richards (long a mainstay of the enormously popular soap opera Eastenders) was cute but dim cockney saleslady Miss Shirley Brahms. Nicholas Smith (with young Mike Berry, one of the only two cast members still alive today) was incompetent, jug-eared Mr. Cuthbert Rumbold, who was autocratic to some, obsequious to his boss, and who had a long series of foxy but stupid secretaries.

Are You Being Served? had much humor based on sexual innuendo, misunderstandings, mistaken identity, and slapstick. Outrageously funny sight gags often featured crazy costumes which the characters were required to wear for store promotions or gaudy store displays frequently with malfunctioning robotic mannequins. The show constantly made fun of the rigid British class system. Are You Being Served? is best remembered for its prolific use of double entendre.

Those double entendres and the show’s reliance on sexual stereotypes attracted some mild criticism, as did frequent jokes about Mrs. Slocombe’s cat. A typical line from Mrs Slocombe: “Animals are very psychic; the least sign of danger and my pussy’s hair stands on end.” John Inman’s camp portrayal of Mr. Humphries as a seemingly gay man could easily be misinterpreted by viewers. Inman pointed out that Mr. Humphries’ true sexual orientation was never explicitly stated, and writer David Croft declared that the character was not homosexual, but “just a mother’s boy.”

The series was very popular in the United States on PBS stations and on BBC America, as well as in many Commonwealth nations around the world. My various wives and I howled through much-anticipated repeat episodes, time and again. A U.S. adaptation pilot episode called Beane’s of Boston aired on CBS, but it didn’t make it to series. An Australian version, also called Are You Being Served?, ran for 16 episodes from 1980 to 1981 and co-starred John Inman as Mr. Humphries.

In 1977, an Are You Being Served? film was released, using the same characters and cast. It was set in the fictional Spanish resort of Costa Plonka. The film was an adaptation of a very successful stage version of the show.

Grace & Favour/Are You Being Served? Again! had the same main cast as its predecessor, plus Michael Bilton (who was priceless in Waiting for God), Billy Burden, Fleur Bennett, and others.

This entry was posted in RagBlog and tagged Alan Waldman, Are You Being Served?, British Television, Criticism, Rag Bloggers, Vintage Television. Bookmark the permalink.