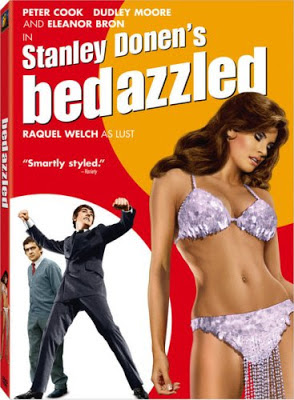 The 1967 Peter Cook and Dudley Moore film Bedazzled is a comedy classic. It’s one of the most brilliant, hilarious British movies ever.

The late Peter Cook and Dudley Moore were one of the most astonishingly talented comedy duos of all time, creating side-splitting classic sketches (available on YouTube) like “One Leg Too Few ” (in which a one-legged actor auditions to play Tarzan) and “The Frog and Peach” (about a restaurant with a very limited menu). These still broke me up the 20th time I saw them, even though I know them by heart. Cook and Moore were breathtakingly original, and their comedy was also very smart.

Their masterpiece was the 1967 black-and-white film Bedazzled (not to be confused with the dreadful 2000 remake, with the same title, starring Brendan Fraser and Elizabeth Hurley). In the early version, directed by Stanley Donen, the Devil (Cook) offers a schlemiel hamburger flipper named Stanley Moon (Moore) seven chances to win the heart of a waitress (Eleanor Bron) he loves from afar, in exchange for his soul. In this droll twist on the Faust legend, the Evil One (under the name George Spiggott) is in a contest with God to see who can gather 100 billion souls first.

Along the way we meet the Seven Deadly Sins — with Raquel Welch playing Lust and Barry Humphries (later to become Dame Edna) as Envy. At one point Spiggott tells Moon, “Lust and Gluttony have the bedrooms closest to the bathroom, but they rather have to.”

As an intellectual, then a rock star, then a wealthy industrialist, Moon seeks to seduce the waitress, but the Devil tricks him every time. Spiggott is full of mischief and is constantly doing things like tearing the last pages out of Agatha Christie mysteries.

When Bedazzled was being shot, the film didn’t have a title, so Cook suggested calling it “Raquel Welch” so the theatre marquee would say “Peter Cook and Dudley Moore in ‘Raquel Welch.’”

You can see the film trailer here. The leg sketch is here, and “Frog and Peach” is here.

I don’t mean to tease you, but I have to relate that in addition to Bedazzled, Peter Cook wrote (with Monty Python’s John Cleese and Graham Chapman) a very funny film that never screened in U.S. theatres and isn’t available on Netflix or for DVD rental (although it can be purchased at Amazon.com). It is 1970’s witty political satire, The Rise and Rise of Michael Rimmer, which I saw in London’s Leicester Square that year. It truly is a buried treasure.