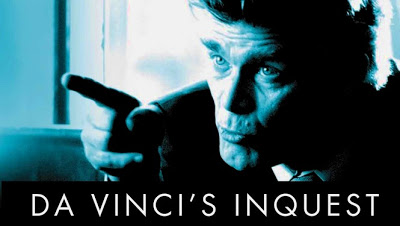 The terrific 1998-2005 Canadian TV series Da Vinci’s Inquest and its 2005-2006 spinoff Da Vinci’s City Hall were smart, gritty, honest, and eminently watchable. Largely based on actual Canadian criminal cases and social issues, both series were inspired by the career and exploits of Vancouver chief coroner-turned-mayor Larry Campbell. The title role, however, was written for actor Nicholas Campbell, who is just great in it.

Inquest ran for 91 episodes (seven seasons), and City Hall followed with 13 more. My wife Sharon and I saw most of them on U.S. TV and found them fascinating. Brilliant Canadian creator-writer-producer Chris Haddock followed the two fine Da Vinci series with the extraordinarily good, short-lived, drug- and corporate-crime series Intelligence, which I previously reviewed here.

The first three seasons of Inquest are available on Netflix, and episodes of both series can be seen on YouTube.

The two series were nominated for 61 major Canadian awards, winning 35. Inquest won the country’s top honor (the Gemini) for best dramatic series and best writing, for six of its seven seasons. The cast was very talented, and acting awards went to Campbell, Ian Tracey, Donnelly Rhoades, Venus Terzo, Duncan Fraser, Colin Cunningham, and Keegan Connor Tracy. More than 91.5% of the 602 viewers rating it at imdb.com gave it thumbs-up, and 41% rated it 10 out of 10.

Butting heads with bureaucracy in both series, Dominic Da Vinci strives to bring criminals to justice and mount needed social change. In City Hall, he locks horns with the police chief, while striving to implement controversial reforms, including a safe red-light district, help for the homeless, a safe injection site for addicts, and cross-training for Police and Fire & Rescue.

The first three episodes of Inquest dealt with a real case: the mysterious disappearance of numerous Vancouver prostitutes and the eventual arrest of a local pig farmer for multiple murder.

The drama of episodes is heightened by the evil of the villains and particularly that of a sly, crooked, and manipulative city cop. There is also much humor in character interactions, particularly in the running badinage between Da Vinci and an older cop played by Eugene Lipinski.