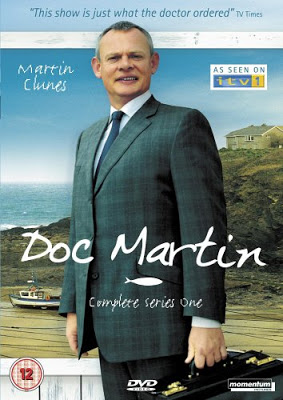 Doc Martin, now shooting its sixth charming season, is popular in more than 30 countries around the world, including Slovenia and Saudi Arabia. Foreign-language adaptations have aired in Germany, France, Spain, The Netherlands, and Greece — and Russia may be next. So far, 39 episodes have aired in the U.S. since 2004, and re-runs can often be seen on local PBS stations. Mine shows them on Saturday evenings.

Martin Clunes is Martin Ellingham (his surname’s an anagram for the name of creator Dominic Minghella), a London surgeon who develops a phobia to blood and who relocates to the picturesque Cornwall Village of Port Wenn, becoming the area’s general practitioner. He is gruff, intolerant, and rude to people, but over time he develops a relationship with, marries, and has a child with local headmistress Louisa Glasson (Caroline Catz).

The community is full of quirky, amusing characters, including a plumber-turned-restaurateur (Ian McNeice), his son (Joe Absolom), Martin’s aunts (Stephanie Cole, followed by Dame Eileen Atkins), local cops, and a series of three dippy receptionists, among others.

Doc Martin won the British Comedy Award and was nominated for 10 other honors — eight for Clunes as Best Actor or Most Popular Actor. The series’s huge popularity may be due to its combination of character comedy and medical drama. The final episode of Season 3 attracted a massive audience of 10.37 million people.

All episodes are on DVD, Netflix, and Netflix streaming, and most are on YouTube. Here’s one. See why millions around the world love this funny, odd-ball series.

Clunes is truly delightful in Doc Martin, and as I mentioned in a previous review, he is hilarious in the wonderfully madcap TV series Reggie Perrin.