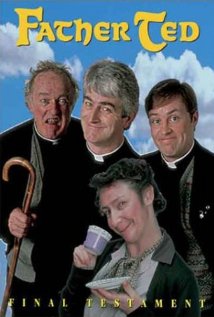 Anglo-Irish sitcom Father Ted brilliantly spoofs Catholic clergy in one of the funniest TV series ever.

The 1995-1998 TV series Father Ted, set on Ireland’s remote, fictional Craggy Island, was almost universally adored until the heart-attack death of star Dermot Morgan, 24 hours after the filming of its 19th and final episode. Father Ted took comedy in wonderful new directions, although its treatment of three eccentric Catholic priests roused viewer protests that drove Boston’s PBS station to take it off the air. All its episodes can be seen on YouTube, and the first season is on Netflix and Netflix Instant streaming.

Created and written by Irish funnymen Graham Linehan and Arthur Mathews (who have written and/or created another 21 comedy series), it follows the hilarious adventures of three priests who have been exiled to a lonely parish house on remote Craggy Island as a punishment.

Father Ted Crilly (Morgan) was sent to Craggy Island as penance for “The Lourdes thing,” in which he supposedly stole the charitable donations meant to fund a children’s pilgrimage and hot-footed it to Las Vegas. He and nutsy housekeeper Mrs. Doyle (Pauline McLynn) now care for the supremely dim Father Dougal McGuire (a delightfully funny Ardal O’Hanlon) and the violent, alcoholic, deranged Father Jack Hackett (Frank Kelly).

Father Ted was nominated for 19 major British and Irish awards, winning 15, including Best TV Comedy for two of its three seasons. Morgan won two awards, including the BAFTA for Best Performer. O’Hanlon and McLynn won performer awards and Linehan and Mathews took two BAFTAs for producing and a best TV Situation Comedy honor from the Writers Guild of Great Britain.

One great running gag is that Father Dougal lacks even the remotest understanding of Catholicism. Father Ted once sarcastically cracks that Dougal entered the priesthood via a “collect 12 crisps packets and become a priest” promotion. His childlike view of life is endlessly hysterical, and he delivers his lines with great deadpan innocence.

By the way, O’Hanlon followed this role with the wonderful lead in the highly imaginative Britcom My Hero. O’Hanlon’s standup comedy is also terrific and can be found on YouTube. (“Women experience pain more deeply than men do, because a certain part of every woman’s brain is always thinking about shoes.)

Father Jack sits in a corner or is passed-out drunk most of the time, and his vocabulary mostly consists of four shouted words: “Drink!,” Arse!,” “Girls!,” and the Irish “F” word, “Feck!” He will drink anything, including floor polish and an Irish product called Toilet Duck. Father Jack’s face is covered with sores, and actor Frank Kelly looked so creepy while in costume that cast members refused to lunch with him.