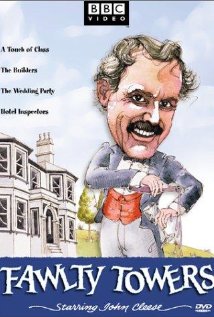 In a list drawn up by the British Film Institute in 2000, voted by industry professionals, Fawlty Towers was named the best British television series of all time. (Other classic programs on that list that I have so far recommended on The Rag Blog include: Yes Minister/Yes Prime Minister, Blackadder, Cracker, Inspector Morse, and Father Ted.)

Six episodes, all painstakingly written by Monty Python genius John Cleese and his American then-wife Connie Booth, appeared in 1975, followed by another half-dozen jewels in 1979.

Fawlty won two BAFTAs as “Best Situation Comedy,” and Cleese took a BAFTA for “Best Light Entertainment Performance.” Cleese was nominated for 22 major awards, including an Oscar for A Fish Named Wanda and other honors for that film, Monty Python’s Flying Circus, Monty Python and the Holy Grail, Harry Potter and the Chamber of Secrets, Clockwise, The Human Face, Shrek the Third and guest shots on Cheers, 3rd Rock from the Sun and Will & Grace. He won 14 of them.

The series is set in a fictional hotel in the seaside town of Torquay and revolves around angry, rude, snobbish, misanthropic, and put-upon owner/manager Basil Fawlty (Cleese); his bossy wife Sybil (Prunella Scales); chambermaid Polly (Booth) and hapless Spanish waiter-porter Manuel (a truly hilarious Andrew Sachs), and their attempts to run the hotel amidst farcical situations and an array of demanding and eccentric guests.

Basil is terrified of Sybil and refers to her with such terms of endearment as “my little piranha fish,” “that golfing puff-adder,” “my little nest of vipers,” “toxic midget,” “my little commandant” and “you rancorous, coiffured old sow.” He once asks a guest: “Did you ever see that film, How to Murder Your Wife? Awfully good. I saw it six times.”

Basil’s verbal and physical outbursts are primarily directed at Manuel, whose limited and confused English vocabulary leads him to many elementary misunderstandings and mistakes. Basil also insults his guests, telling one couple, “May I suggest that you consider moving to a hotel closer to the sea? Or preferably in it.”

Each episode’s opening shot is of the hotel and its “Fawlty Towers” sign, which is often misspelled (“fatty owls,” “flay otters,” “flowery twats,” and “farty towels”).

Cleese got revenge on one critic of the show, TV reviewer Richard Ingrams, by naming a guest who is caught in his room with a blow-up doll after him.

Booth and Cleese spent months perfecting each script, sometimes writing as many as 10 drafts. The production team spent nearly an hour editing each minute of every program, spending up to 25 hours per show. Fawlty Towers came second only to America’s Frasier in The 2006 Ultimate Sitcom poll of comedy writers, and Basil topped 1997’s Britain’s Funniest Comedy Character poll.

In 1977 and 1978 alone, Fawlty was sold to 45 stations in 17 countries and was the BBC’s best selling overseas program for each year. But it was initially a flop in Spain, because of the portrayal of the Spanish waiter Manuel. It was successfully resold, with Manuel’s nationality changed to Italian. (In the Catalan region of Spain, Manuel was Mexican.)

The idea for Fawlty Towers came when the Monty Python cast was taping on location in Torquay and staying at a terrible small hotel run by a person Cleese calls “the rudest man I ever met in my life.” The hotelier threw a timetable at a guest who asked when the next bus would arrive, placed Eric Idle’s briefcase behind a garden wall claiming he suspected it contained a bomb, served Graham Chapman (who ordered a three-egg omlette) an omlette with three fried eggs stacked on top, and criticized American Python Terry Gilliam for his “non-British” table manners (switching hands with fork and knife while eating).

If you are among the handful of unfortunate Americans who have not seen all 12 of these priceless Fawlty Towers episodes, they are all available on Netflix, Netflix Instant, and YouTube.

Let me leave you with three Basil Fawlty lines. He refers to Sybil’s laugh as “someone machine-gunning a seal.” He says “Manuel will show you to your rooms…if you are lucky.” And he states, “I’ll go and have a lie-down. No I won’t; I’ll go and hit some guests.”