Posted on September 2, 2013 by Thorne Dreyer 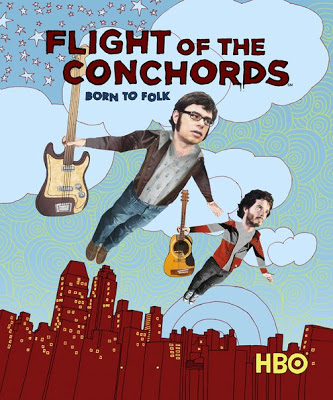 Flight of the Conchords, available on DVD and Netflix and still airing on HBO, is one of the funniest, most original sitcoms ever. I didn’t find any complete episodes on YouTube, but here are their remarkable song spoofs from the first season.

Conchords, set in New York City, follows the comic adventures and travails of a New Zealand folk rock duo (real-life musician-singers Jemaine Clements and Bret McKenzie) who struggle to get good performing gigs, because of the incompetence of their manager, Murray (Rhys Darby). Another very funny character is their deranged only fan (and stalker), Mel, brilliantly played by The Daily Show comic Kristen Schaal.

The show originated as a successful improvised 2005 BBC 2 radio series with the same name, which won them the Bronze Sony Radio Academy Award for comedy. McKenzie was music supervisor for the 2011 Muppets movie and won an Academy Award for Best Original Song for the song “Man or Muppet.”

The show is totally written by Clement, McKenzie, and their director, James Bobin. Murray, their hapless manager, has a day job is as Deputy Cultural Attaché at the New Zealand Consulate in Manhattan. Jemaine and Bret unsuccessfully pursue hot women, while fending off the advances of their married goofy groupie/stalker Mel. Their antagonists are often Australians. One of Jemaine’s pickup lines is: “You’re so beautiful, like a tree or a high-class prostitute.”

In each episode, Jemaine or Bret breaks into song, which is built into the narrative structure of the show in different ways. Typically, at least once per show, a song is shot in the form of a music video. These song parodies are in many music styles, featuring animation, special effects and great comedy. Titles include Frodo (Don’t Wear the Ring), You Don’t Have to Be a Prostitute, Fashion Danger, and Too Many Dicks on the Dance Floor.

The show had a positive critical reaction. The Guardian of London called it, “the best new sitcom to emerge for YEARS.” The San Francisco Chronicle reviewer raved, “It may well be the funniest thing you’ve seen in ages.” And the Detroit Free Press scribe described it as “TV’s most original and irresistible new comic concoction.”

A Flight of the Conchords movie may be in the works.