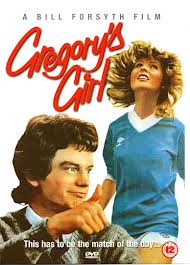 Bill Forsyth’s 1981 Scottish masterpiece, the coming-of-age comedy-romance Gregory’s Girl, is one of my very, very favorite movies ever, and if you can find 91 free minutes you should watch it, either on DVD, Netflix or here on Netflix Instant.

It won the 1982 Best Screenplay BAFTA for Forsyth and nominations for him as Best Director, Best Film, and Most Outstanding Newcomer for star John Gordon Sinclair. It also won the London Critics Circle Special Achievement Award for Forsyth, as well as the Variety Club’s Actress of the Year honor for female lead Dee Hepburn. Fully 92% of the critics polled at rottentomatoes.com liked it, as did more than 87.7% of viewers rating it at imdb.com. A clip from the film was featured in the opening ceremonies of the 2012 London Summer Olympics.

The film has a marvelously goofy tone which is also found in Forsyth’s films That Sinking Feeling, Comfort and Joy, and the widely beloved Local Hero. Set in a small Scottish town’s secondary school, it features Sinclair as Gregory, a lanky, awkward student who is replaced on the school’s soccer team by beautiful Dorothy (Hepburn), on whom he immediately develops a mad crush. She agrees to go out with him and that launches one of the most delightful sequences I have ever seen on the big screen. (I will not give it away.)

Gregory seeks the dating advice of his two clueless male pals (very funny!) and is eventually counseled by his 10-year-old sister. The dialogue is highly amusing, and there are many surprising elements, such as a child in a penguin suit who wanders through scenes for no apparent reason. Sinclair is terrific in the lead role, and several other performers are excellent too.