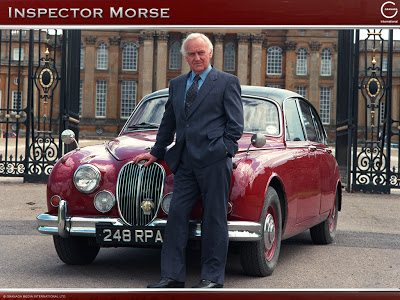 Inspector Morse is a truly splendid English crime/mystery series that ran for 33 episodes and 12 seasons (1987-2000), until author Colin Dexter killed off the brilliant, crusty Oxford police chief inspector in a poignant final episode. Not too long thereafter, superb star John Thaw passed away, at only 61.

More than 96.3% of the 2,865 viewers rating it at imdb.com gave it thumbs-up, and 33.8% consider it a perfect 10. Inspector Morse’s six writers include Oscar-winning director Anthony Minghella (The English Patient) and its directors include Oscar winner Danny Boyle (Slumdog Millionaire) and Oscar nominee John Madden (Shakespeare in Love). Scores of Britain’s top actors guested in the series as victims, suspects, or murderers.

Inspector Morse and Inspector Lewis are smarter, twistier and much better written and produced than most cop shows, with no fights, chases, or on-screen violence. The tales are set in and around Oxford University, so they deal with real issues, assorted intellectual matters, and nefarious university politics. My various wives and I found the 60 episodes released so far in the U.S. (usually on PBS’s Masterpiece Mystery) compelling and fascinating. I sometimes check them out of my local library and enjoy them again.

Many of the episodes are taken from the Morse novels of Colin Dexter, who makes Hitchcock-like cameo appearances in 30 episodes. His writing and plotting are very good.

Inspector Morse is an odd duck. He is cynical and acerbic and loves opera, “real ale,” cryptic crossword puzzles, and his classic red and black Jaguar Mark 2. He is a very astute detective, although he sometimes arrests the wrong suspect. He is a frustrated romantic, gently flirting with and sometimes dating witnesses, colleagues, and murder suspects.

In Morse, Lewis is a quiet, conscientious sergeant and loving family man, although he is a widower in his own series. The Morse-Lewis relationship is a fascinating one, as is Lewis’s with his partner Detective Sergeant Hathaway (Laurence Fox) in the sequel.

Composer Barrington Pheloung (BAFTA-nominated for both Inspector Morse and the good 1998 film Hilary and Jackie) has a flute play the word “M.O.R.S.E.” in Morse code in the show’s theme music at the beginning and end of episodes. Sometimes that flute also plays the name of the murderer in code, although after savvy viewers figured that out he began spelling out the names of other suspects to fool them.

All 33 Morse episodes are available on DVD and Netflix, and 20 episodes of Lewis are on Netflix — including 15 that can be streamed on Netflix Instant. Many episodes of both series can be seen on YouTube. Morse may be the most enjoyable mystery series I have watched, Lewis is very good, and I firmly believe you would greatly enjoy them both.