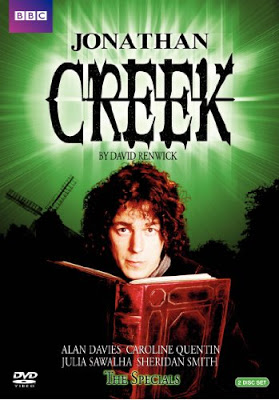 Jonathan Creek is an extremely popular mystery TV series that so far, since 1997, has aired 32 episodes in five seasons — four of which are available via Netflix. Most episodes can be seen for free on You Tube, including this one. More episodes are planned.

Jonathan Creek contains many comic touches, some of which involve the buffoon stage magician (Stuart Milligan) Jonathan creates tricks and illusions for. The series has serious guest spots for beloved comic actors such as Joanna Lumley and Rik Mayall (who plays a canny police inspector in the episode linked above).

The series gives away how a number of magician’s tricks are done. Jonathan, who lives in a windmill in Sussex, uses lateral thinking and ingenuity to solve murders and other serious crimes. Over time the show became noticeably darker, with him investigating psychopaths, pimps, gangsters, and corrupt policemen, as opposed to the duplicitous suburbanites of earlier series.

Jonathan Creek won four major awards (including a Best Drama Series BAFTA and an honor for series writer David Renwick) and six nominations (including Davies for Most Popular Actor).

Almost overnight, the series made Davies “the thinking woman’s sex-symbol.” More than 93.3% of viewers polled at imdb.com gave it thumbs-up, and a whopping 37.8%-plus rated it 10 out of 10. It was a hit with all demographics but was liked most by females age 18 and younger.

I think you would find it a treat.